The Black and White • March 26, 2019 • https://theblackandwhite.net/63592/opinion/blogs/the-kazoo-more-than-a-mediocre-plastic-instrument/

The kazoo: more than a mediocre plastic instrument 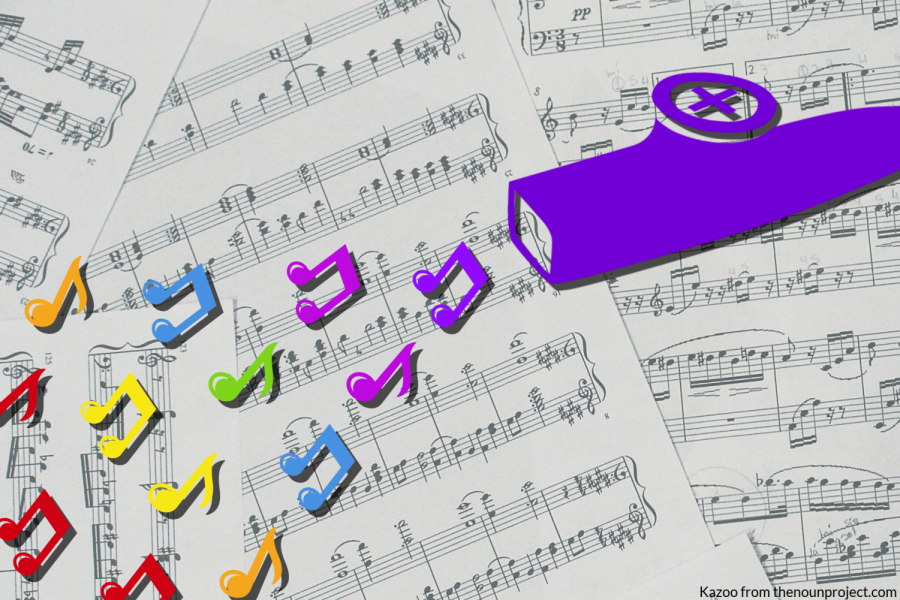 A few weeks ago, I’d succumbed to typing an article pitch about digitizing report cards. After nearly boring myself to tears, I glanced up from my keyboard and saw a Secret Santa gift—an eight pack of kazoos from Rite Aid—that I’d received in December. It sat on my desk, dusty and neglected, patiently awaiting my attention.

Like any chronic procrastinator, I stopped formulating my dull report card idea and picked up the kazoos, gifted to me in a cardboard Fusilli pasta box. I hadn’t played the kazoo since elementary school—back in my days of dinosaur chicken-nuggets and glitter glue. But the desire to avoid my schoolwork won out, so I lifted a neon green, plastic kazoo and began to play. Here’s what I’ve learned over my short career.

Anyone can be a musician.

I played piano for eight years, taking lessons with a retired pianist who lived in my neighborhood. His name was Jerry. He never wore shoes. Every Wednesday, I sat at his wooden piano and attempted to pluck out pieces I claimed I’d practiced, butchering the music so badly that Jerry and his bare feet asked on multiple occasions if I needed stronger glasses.

When I stopped taking lessons in eighth grade, I was at the same level as my nine-year-old neighbor, who wore his pirate sash to school every day and thought Pennsylvania was the biggest pencil in the world.

But my cringeworthy piano past didn’t affect my kazoo career. The kazoo doesn’t care if you’re musically gifted. It doesn’t care if you’ve played at Carnegie Hall or if you think Carnegie Hall is the mansion in Clue. Too often we stop ourselves from trying something because we don’t fit the profile, but kazooing is for everyone. It’s the Michelle Obama of musical instruments. My immediate reaction to the re-discovery of my pasta box was that I was either too mature to play or not musically gifted enough. Well, as the British say, that’s a load of rubbish.

If a kazoo is played quietly, does it really make a sound? I mean, technically. But is it a nice, fresh, fun sound? Absolutely not. The more you embrace your inner-kazooer and kazoo like nobody’s business, the better your music will sound. When you kazoo, it shouldn’t sound like a tiptoeing mouse. It should sound like the moderator of a political debate, yelling over arguing candidates. Live at full volume. Play at full volume.

The more kazoos, the merrier.

Form a kazoo klub. A kazoo kompany. A kazoo krew. One day, I brought my eight-pack of kazoos to my friend’s house, and my pals and I kazoo’d our kares away. The only thing better than kazooing alone is kazooing with friends.

Dance poorly to the rhythm of your own kazoo.

The best part of the kazoo is that it only has one pitch. Only one default note. This means that it’s nearly impossible to play any recognizable song. So we can get creative. We kazoo our own tunes through rhythm alone and show the world what our music is made of. As long as we go with our guts and follow our musical aspirations, we can pave our own pavements and kazoo our own courses. And if you want to bust out some cool, awkward dance moves along the way, that’s even better.

I’m not saying that kazooing will solve everything, but hopefully these somewhat abstract metaphors help you realize that the kazoo holds more answers than we think. The moral of the story? Life lessons can be found in pasta boxes. And procrastinators always win.