The Black and White • March 24, 2019 • https://theblackandwhite.net/63577/news/community-members-politicians-discuss-equity-mar-13/ 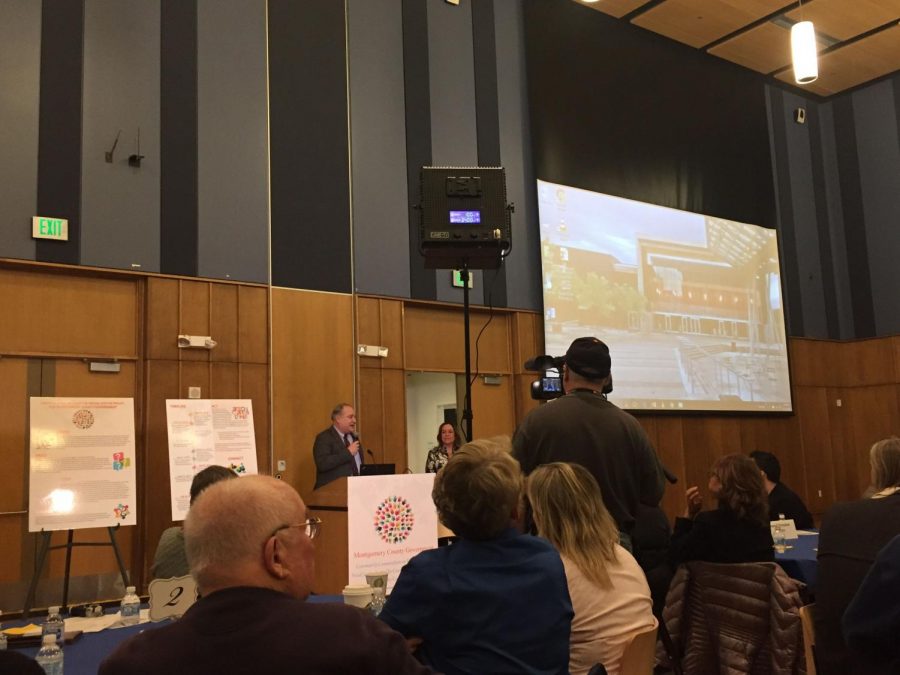 Community members and politicians held the first in a County Council-sponsored series of conversations about racial equity Mar. 13. The meeting was part of an initiative to adopt an “equity lens” in governance.

Community members and politicians held the first in a County Council-sponsored series of conversations about racial equity at the Silver Spring Civic Center Mar. 13.

The meeting was the first step in a program initiated by Council president Nancy Navarro and County Executive Marc Elrich to adopt an “equity lens” in governance. As part of this push, the county government will encourage community members to hold conversations about how race shapes their daily lives and what can be done to ensure that race no longer predicts life outcomes.

By this summer, community members will send reports from their conversations to the County Council, which will craft legislation intended to deal with equity issues. The Council will vote on those proposals in the fall.

“That’s when the real work starts,” Navarro said. “That’s when you have to start analyzing all the decisions through this lens and take into consideration that data. It’s going to be a year-long process.”

Lawmakers will vote on the proposals January 2020.

At the meeting, people sat in tables of 10, and a community engagement packet was passed out to facilitate future conversations. Some latecomers were left without tables since a few hundred people attended. Following a series of speeches by county officials and a video, community members discussed three questions about racial inequalities and the role lawmakers can play in creating a more equitable county. After 45 minutes, the groups shared their answers to the entire audience.

Many tables discussed the need for affordable housing policing reform and school redistricting. The general mood was one of high spirits and hopes for future dialogue.

“One of my takeaways from today’s event is that there’s a lot of interest in this issue in the county,” Navarro said. “Everybody is very committed to working on this racial equity and social justice policy.”

When asked what they hoped the county would look like in 20 years, audience members spoke of a desire for inclusion and diversity. Muslim activist Aizat Oladapo said she came because of her desire to make the county a better place for her children.

“I really am here because of my kids,” Oladapo said. “I want them to live in a place that they can actually feel safe and not feel like they don’t belong.”

It’ll be up to individuals and activists to organize the next series of conversations. Activist groups within the Whitman community will also participate in later conversations. The Whitman YDSA, the Muslim Student Association and the Minority Scholars program have organized a conversation after spring break.