The Black and White • March 18, 2019 • https://theblackandwhite.net/63537/news/students-teachers-frustrated-over-alleged-college-admissions-bribery-scandal/ 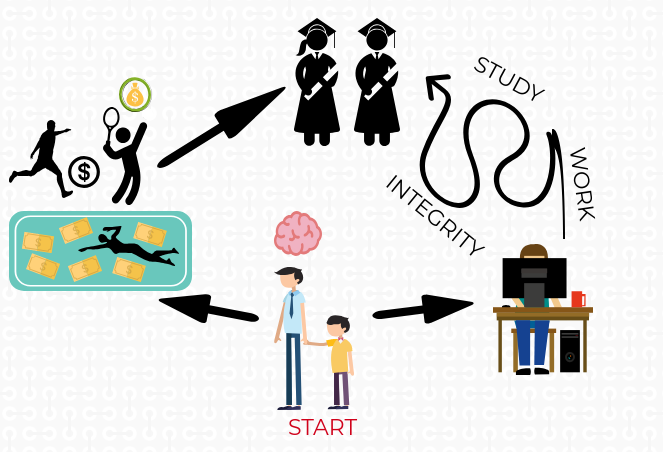 Fifty people were charged March 12 in an alleged college admissions bribery scheme. Many students in the midst of the college process said they felt cheated.

When senior Evin McDonald, who is committed to play tennis at the University of Texas at Austin, found out that his college coach was set to be prosecuted for accepting an approximately $100,000 bribe in a college admissions scheme, he was stunned.

“I was just in complete shock,” McDonald said. “I talked to the guy literally four days ago, just having a normal conversation. I could have never expected anything like this. No one did. I’ve been really upset about it because the guy was just great to us. But clearly he did some bad things, and it’s going to be hard knowing that we’re not going to have him for the next four years.”

McDonald’s coach, Michael Center, has been accused of accepting approximately $100,000 as a bribe in 2015 in exchange for selecting a student for the tennis team to help that student’s chances of admission.

The scandal sparked national outrage, even leading two Stanford students to file a class action lawsuit against the eight colleges involved in the case; they’re alleging that the rigged system denied them a fair chance at admission.

At Whitman, both students and teachers were appalled by the lengths wealthy parents went to in order to get their children into top colleges, but they also agreed that people buying their way into schools might happen more often than many believe.

“I laughed when I found out,” junior Sam Geesing said. “It’s kind of common knowledge that rich kids have an advantage already, which makes it even more disappointing that parents would shell out this much money just for their kids to have a better chance.”

Parents allegedly paid Singer between $15,000 and $75,000 for him to organize someone else to take the SAT for their child or correct their child’s answers afterward.

“It makes me really mad,” she said. “I did so much work to do well on the SAT’s, and it’s so hard to do well on those tests, so the fact that these people could just pay their way is just so frustrating.”

Students involved in the scandal who are currently enrolled in college have faced controversy surrounding whether or not they should be expelled. Both social media influencer Olivia Jade and her sister have already dropped out of the University of Southern California, but others have yet to withdraw or face expulsion.

Junior Reuben Pegues believes the scandal was unfair for students who honestly applied, but he still sees why parents would spend hundreds of thousands of dollars bribing test proctors and college coaches.

“I understand parents always wanting the best for their kids, but it made me feel bad for all the people who worked so hard to get into these elite schools and put so much work into it,” Pegues said. “Families of affluent backgrounds can just bypass those expectations of doing well in school and being an overall, well-rounded student.”

Parents also allegedly paid Singer between $250,000 and $6.5 million to create fake sports profiles with doctored photos for their children and to bribe college coaches to recruit under-qualified students. Many of the students had never participated in their listed sport competitively.

Cross country and track coach Stephen Hays was disappointed in the numerous college coaches who had allegedly accepted bribes and recruited undeserving students onto their teams.

“It’s hard to get to that next level in sports,” Hays said. “There are very few spots available for those kids, and for those spots to be taken by people that don’t even have the athletic ability is sad.”

McDonald said the issue isn’t single-sided, and people shouldn’t be too quick to judge based only on the information currently available.

“There has to be some backstory to it all,” McDonald said. “A reason why he took the money, because I feel from his character that he wouldn’t just take it for himself.”

Among the nine other athletic directors and coaches accused, Center is the only one who has announced that he intends to plead not guilty to the charge.

McDonald and the other three 2019 recruits all decided to stay committed to Texas. They spoke with the interim head coach, Bruce Berque, who reassured them that the program will continue to remain at a high level.

“It’s not really affecting the tennis program other than the fact that there’s going to be a new coach,” McDonald said. “But there’s not going to be any sanctions placed on the team as of now, and that was really our only worry. Other than that, we still want to be at Texas, and we chose the school for other reasons, too.”

For many people, the scandal exposed cracks in America’s college admissions process; some believe it goes much deeper than currently reported.

“It’s just who they’ve caught right now,” Hays said. “They’re just now beginning to figure it all out, and if this has been going on since at least 2011, I’m certain that there are a lot more than just 50 people. There have to be.”

Dana Herrnstadt contributed to this article.