The Black and White • March 18, 2019 • https://theblackandwhite.net/63520/news/npr-journalist-kojo-nnamdi-hosts-town-hall-on-mcps-diversity/ 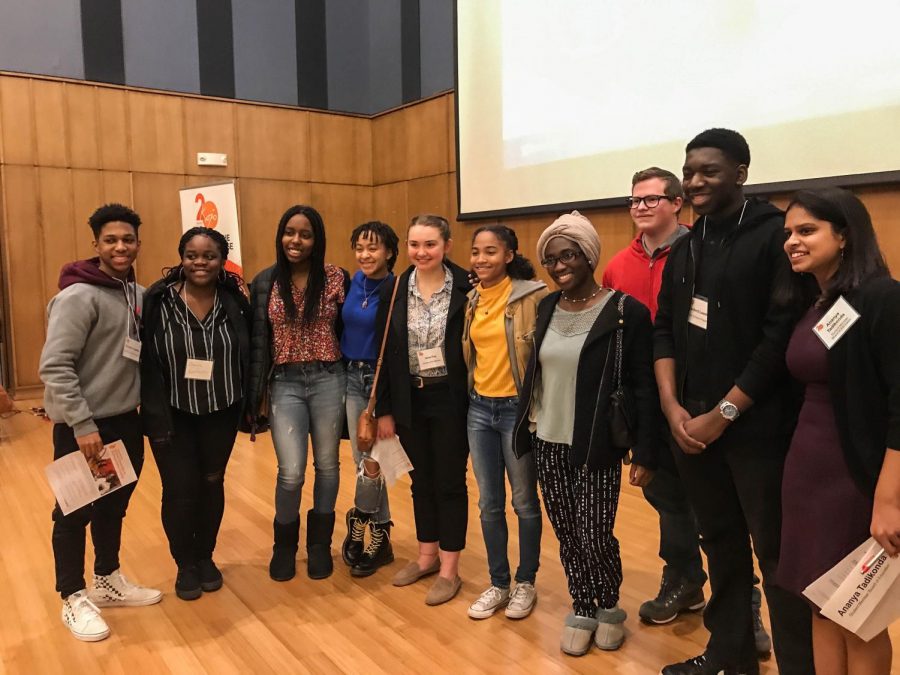 Students at the Kojo Nnamdi town hall pose for a photo. Senior Breanna McDonald spoke at the event about attending a racially homogenous school.

By Anna Yuan and Meera Dahiya

The town hall began with a focus on Tadikonda’s proposed boundary study, which aims to pinpoint de-facto segregation and overcrowding within MCPS schools. The study inspired Nnamdi to center the discussion around school diversity, he said during the meeting.

“We had two dual systems, one for colored, and one for white in this county, and people often forget that,” Johns said. “When you look to the practices, boundaries were exactly how the de facto segregation was maintained.”

The racial makeup of schools varies drastically across the county. At John F. Kennedy High School, minorities make up 95 percent of the student body; at Whitman, they make up only 20 percent. Tadikonda hopes that the study will help the BOE alleviate overcrowding and increase school diversity.

“We are massive, going on 207 schools at this point, and we never have looked at the county as one big picture,” Tadikonda said. “We’ve addressed needs when they arise but haven’t necessarily said, ‘How do piece A and piece B fit together to provide the best facility and environment for our students?’”

Tadikonda, Navarro and Evans all agreed that increasing school diversity promotes equality across the county and improves students’ cultural literacy. On the other side of the debate, Alvarenga said that changing boundaries wouldn’t improve equality of opportunity—because the opportunity gap has deeper roots than just school boundaries.

“Montgomery County for a long time has talked about diversity and has wanted to make schools diverse,” he said. “I don’t think that that’s necessarily the solution—just to make a school check off a box that okay, now this school is diverse.”

Rebecca Smondrowski—the only Board member who opposed the study—said she’s concerned the Board is rushing the boundary study and not placing enough emphasis on programs that help low-income students.

Nnamdi opened up the discussion to parents, students and teachers in the audience. Audience members brought up high rent prices that disproportionately affect minority families and the Kirwan commission school budget recommendations, which suggest an extra $6.87 million in funding for Maryland school districts. They also discussed the lack of diversity in magnet programs, the need for socioeconomically diverse consortiums, which are groups of high schools that provide school choice for students in those districts, and teacher migration from low-income schools to more advantaged ones. Panel members briefly discussed and responded to each issue.

At the end of the town hall, Whitman senior Breanna McDonald—who supports the boundary study—said that racially homogenous schools fail the few minority students who attend. McDonald is president of Whitman’s branch of the Minority Scholars Program, which aims to improve opportunities for minorities and race relations in school. She said that MSP provided her with a rare resource.

“This conversation wouldn’t be even happening in Bethesda,” McDonald said. “It’s a predominantly white neighborhood, and I am probably one of two minority students in a majority of my classes. If I had known what I know now, I would’ve transferred from Whitman. There’s no amount of equity and wealth that school can provide me [to make up for] what it has left me with trauma.”

To listen to an edited version of the town hall discussion, click here