The Black and White • March 12, 2019 • https://theblackandwhite.net/63506/feature/its-time-we-stop-generalizing-generations/ 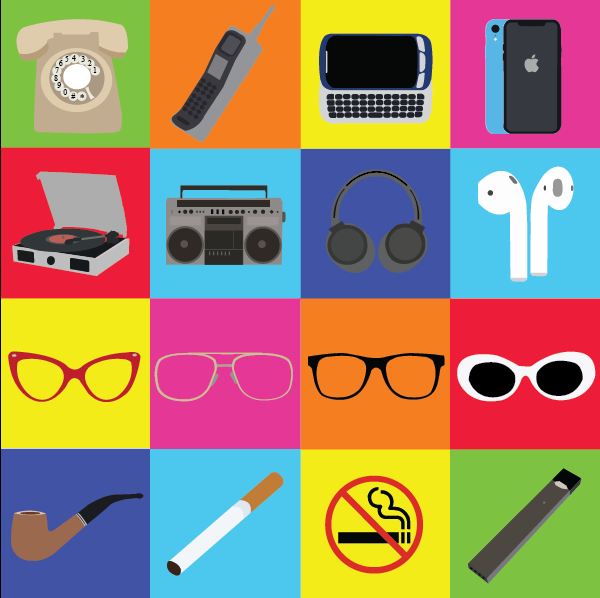 By Meera Dahiya and Ally Navarrete

If you want to design a product sure to inspire any iGen-er, make it high-tech, authentic, personalized… and add a Snapchat filter, why don’t you? That’s how a 2018 Forbes article titled “13 Strategies For Marketing To Generation Z” recommends advertisers appeal to Gen Z, also referred to as iGen, the cohort of individuals who came of age after Sept. 11, 2001.

As each generation becomes consumers, many groups—including marketers, the media, the government and even history teachers—intent on simplifying generational differences categorize and stereotype generations. To advertisers, members of the silent generation are hardworking and disciplined. Baby Boomers are independent and competitive. Generation X-ers, by definition, are self-sufficient and resourceful. Millennials are confident and ambitious. And us? We’re pragmatic, tech-dependent change-makers. Capitalizing on these traits makes it easier to sell products, collect data and identify patterns.

Generational labeling is even a part of the college admissions process. New York University has changed its marketing strategies to appeal more to the individualistic aspect of Gen Z. Christopher Browne, an art director in the advertising and publications department at NYU, said this is one way in which labeling generations has actually been effective.

“When I first started here five years ago, there was an old fashioned approach to talking about what NYU has to offer,” Browne said. “It was high-minded, aspirational, institutional talk, and it didn’t seem very personal. Then it became more personalistic because this is a generation that wants to be treated as individuals.”

But confining entire generations to a handful of key characteristics stifles compromise and understanding between groups that, after all, aren’t that different in the first place.

With the rapid development of technology, it’s easy to believe that iGen is exceptionally unique, that the values we stand for—individualism, creativity, social change—are unprecedented. The clear-cut labels advertised by marketers and the media were, admittedly, attractive; distinguishing our generation from our parents and grandparents felt good. Who doesn’t want to be special?

So that’s how we approached reporting for this story: under the impression our generation’s habits were never before seen.

We interviewed members of four different generations, asking them what made their generation unique, and what we found differed significantly from our assumptions. While technology distinguished our generation from others, values overlapped between generations.

In 1969, an estimated 500,000 people protested U.S. involvement in the Vietnam War. In the wake of the Parkland shooting, our generation also took to the streets, with an estimated 800,000 people marching at the March for Our Lives in Washington, D.C.

“During the Vietnam war, we started protesting,” Whitman grandparent Sandy Grundman, a member of the Silent Generation, said. “We started to think of ourselves as not respecting authority as much. I think it became a period where we really questioned authority a whole lot.”

A combination of enormous events—the death toll in the Vietnam War broadcasted on nightly news, the sameness of suburbia, the bubbling resurgence of conservatism and the cloud of secrecy that shrouded the White House—compelled young people of the 70s to take to the streets.

For us, a succession of school shootings, government inaction and a mind-numbing news cycle all convinced iGen-ers to assemble across the country for the March for Our Lives. Each generation builds upon the progress of the last, and youth protests of the 70s paving the way for the change-makers of Gen Z is only one example of this.

Even parenting resources were commonplace among earlier generations. The books were nothing like the helicopter parenting of today, but guides like Dr. Spock’s “The Common Sense Book of Baby and Child Care,” published in 1946, became commonplace, teaching parents to nurture, not discipline, their children.

“Parents are a lot more involved in their children’s lives now,” Whitman parent Reshma Rathod said. “Our parents were a lot more hands-off, which taught us to be more independent.”

Still, we will never quite be the same as our parents and grandparents. Social media has connected people in ways that the brick phone of the 1980s never could. With the help of technology, our generation is perceived as more politically active than anyone before us. We’re unquestionably more impatient than our predecessors, and technology has drastically altered the way we see the world: civil wars and famines are far more visible when they’re mentioned in headlines on Facebook.

“Because of social media and the way that information is shared, there is very little sense of hierarchy or power structure that can’t be crossed,” English teacher Matthew Bruneel, a millennial, said. “Anybody can access the microphone or podium and really be a change agent.”

Sure, generational clichés can be somewhat useful; marketers, historians and anthropologists benefit from categorizing generations into bite-size groups. But if we want to reduce finger pointing and increase understanding, dismantling generational stereotypes is key. The experiences of past generations shape our understanding of the world; for us, events that influenced our parents and grandparents are distant, but the values gleaned from them aren’t foreign. Accepting the commonalities between iGen-ers and our grandparents is a small step toward bridging the generational gap.