The objects that define us

"This story is about pausing and reflecting on those frozen moments and memories." 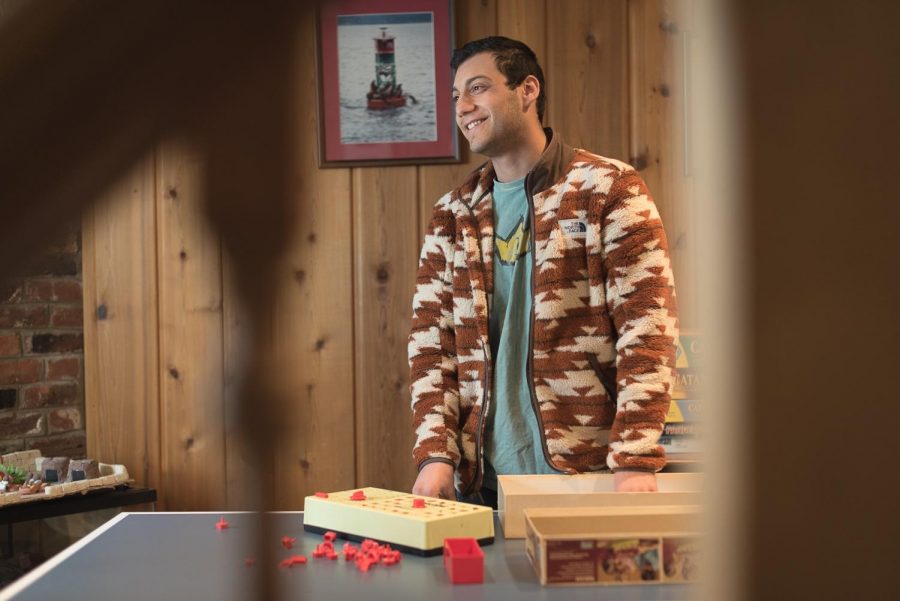 While it often feels like our lives are in constant motion, a childhood toy, a certain photograph or a special pair of earrings can remind us of an activity we used to love or a person we miss. For me, it’s the books from my grandparents’ bookstore that they brought my family on Sunday nights before my grandma died. For junior Lorenzo Natal, it’s the Italian flag he sees first thing every morning. And for sophomore Gabby Fleming, it’s the microphone she uses to sing and express herself.

This story is about pausing and reflecting on those frozen moments and memories. Along with sophomore photographer Charlie Sagner, I went to several students’ homes, learning about the objects that represent who they are.

Junior Graham Soofer
“I was super close with my grandparents. We would go out to dinner a lot; they introduced me to mussels and Mountain Dew. When they moved to Bethesda, we would see them almost every weekend.

Unfortunately, they passed away. It sucked. This is the game we would always play. I used to play board games with them a lot. When we were cleaning their apartment out, there was this one game we used to play called ‘Perfection,’ and I was like ‘we’ve got to keep this.’ It was kind of an ‘always thing.’ When I got older they didn’t want to play as many games as when I was younger, but this game was always fun.”

Sophomore Gabby Fleming
“This is my microphone. It helps me sing well and use my voice. I sang at Strathmore when I was 14 and 15, and now I like to sing ‘How Far I’ll Go’ from Moana. I also like to sing ‘Remember Me’ from Coco; it’s my favorite song. I’m singing ‘How Far I’ll Go’ at Carderock Idol. It’s a contest next weekend. It’s my first competition. I like singing with the microphone to practice. I dream about being a pop star or becoming famous.” Senior Alison Xiao
“This is a hedgehog, as you can see. It’s a little stuffed animal that I collected when I was in Japan three years ago. It was given to me as a gift from one of my host students I had at the time. Being able to stay with them and be with them was one of my favorite experiences I’ve ever had. I love Japanese culture. A big dream of mine is to study abroad in Japan.

But Japan and its neighboring countries don’t have really great relations right now. It’s deeply rooted in a lot of hostility that has to do with imperialism from World War II. It really makes me sad when I hear about how my relatives don’t want me to hang out with a certain Japanese family because they don’t like the Japanese. That’s something that I want to improve on if I can. This is a symbol of friendship between me and a Japanese family.”

Junior Lorenzo Natal
“It’s an Italian flag. I bought it with my own money. It’s important because half my family is from Italy. We don’t often go to Italy, so it’s important to remind ourselves where we come from. I like how it’s extremely different—how people live—especially in the summer. Even if they don’t know you, people are more friendly and open. At the same time, there’s a reason my grandparents left Italy: there’s not a lot of opportunity there. There’s a trade-off, but that’s why we go back there and we keep these signs of it.

We’re tourists there. We’re the Americans of the family visiting the Italian part. Sometimes our Italian gets really rusty, and it’s obvious that we don’t live in Italy. I see this and I’m like ‘yeah, I’m Italian.’ I speak English all day, but in the end I’m Italian, and the flag reminds me of that.”

Junior Racheal Adeoti
“I’ve always just loved music. It’s the one thing I love to do. I could just come home and play the guitar for hours. My mom bought it for me. I don’t see my mom often, especially when I was in boarding school. I guess that’s why I love it so much. It’s a coping mechanism. Imagine being in a boarding school in a different country when you’re 11. Music was something I was good at, and it was an escape. My friend and I auditioned for talent show and we actually won. In terms of Whitman, people don’t really know I play guitar. Junior David Jacobstein
“I’m a diehard Star Wars and Marvel fan. I’m one of the only people I know who does this. I play with them sometimes, but I usually keep them on display. It lets me represent myself in my own way. I have a whole list on my phone of things I want to look for. In the collecting community, there’s a term used called ‘in the wild,’ where you don’t order it online; you go out in stores and find it. There’s no other feeling like it.

I’d been looking for Darth Revan for forever. Scalpers were selling it for 70 bucks. I was like ‘I need to get this guy one way or another.’ I was looking for another figure, I called Toys R Us and I was like ‘Do you guys have this figure?’ and they were like “No, we have Rev.” And I was like, ‘You guys have Rev in store! Hold it right now!’ It’s the thrill of the hunt for me.”