The Black and White • March 12, 2019 • https://theblackandwhite.net/63488/feature/fencing-helps-sophomore-sarah-tong-let-her-guard-down/ 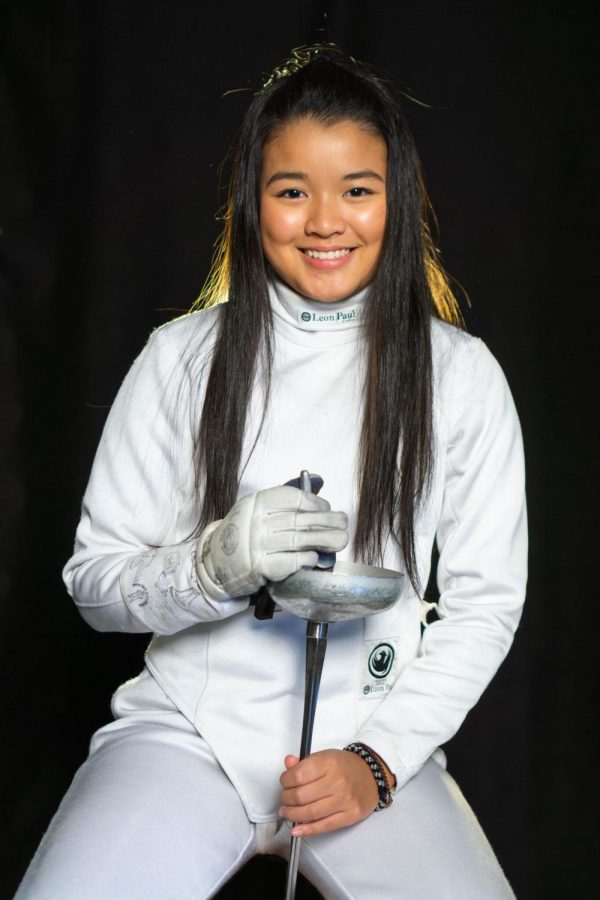 As a young child, sophomore Sarah Tong was always the first to back down from conflict.

“Sarah can be very quiet and shy. When she was little, if anything approached her, she’d step back,” her mother, Wei Shen said.

To give her daughter more confidence, her mom signed Tong, then 11, up for fencing.

Since moving to the United States four years ago from Shanghai, China, she’s competed at the Junior Olympics three times. She competes nationally once a month and attends local tournaments one to two times a month, she said.

Despite her success, Tong says she’s at a disadvantage. Most competitors started when they were eight or nine and have parents who also fenced.

“Especially when it comes to competitions it’s not really skill; it’s also mentally knowing what choices to make in a split second,” Tong said. “With experience, you know what to do. For me, I make the wrong decisions a lot because I just don’t have that experience.”

At national competitions, she competes against more than 200 competitors. Tong tries to place in the top 40 percent of competitors and earn national points so she can qualify for more prestigious competitions, like the Junior Olympics and Summer Nationals. She has a B rating on the national A to E scale.

Her coach said that fencing has given her tenacity she didn’t have before.

“Sarah has come from being a reserved and shy girl to a mature fencer who isn’t afraid of overcoming herself,” he said.

Tong’s family moved four years ago because they wanted her to get an American education, she said. Her timid nature also made her move more challenging, she said. She went from a small, private international school where everyone was friends with everyone, to Pyle Middle School, which was bigger and more intimidating, she said.

Fencing, in part, is what gave Tong the confidence to walk up to people, making it easier to make friends she said.

When not at practice or competitions, she works out and does footwork drills, like ladder exercises and specific fencing steps at home, she said.

But for Tong, the hardest part isn’t the time commitment or physical dedication—it’s having the mental strength to think ahead of your opponent.

“You have to trick your opponent into thinking that you’re doing something you aren’t—you have to plan multiple steps ahead of them,” she said. “It seems like you’re just poking someone but when you’re on the strip, the most tiring thing you’re doing is thinking what the most strategic move will be.”

Usually Tong travels to competitions with her parents, who record videos of her competing and send them to her coaches.

She trains one-on-one with a coach. Although this individual dynamic has drawbacks, it helps her improve.

“One-on-one training is extremely important,” her coach said.“Fencing is a sport of one- on-one competition, so private training helps gear those core techniques to Sarah and helps her improve from a strategic point of view.”

There have been several occasions when Tong has wanted to quit. Last year the sport had become too tiring, and she hadn’t been as successful as she had hoped, she said. Her dad emailed the coach, and she ‘quit’ for a week before her mom encouraged her to go to one last tournament.

“That competition was actually how I earned my B rating,” she said. “So then I figured it was a sign I shouldn’t quit because it was a reminder that my work actually had paid off.”

Tong said confidence is one of the most important things fencing has given her.

“A lot of times when I’m in intense situations while fencing, I hesitate. But when you see the opportunity, you have to strike,” she said. “In real life I hesitate a lot too, but I’ve learned you have to stop and go, even if you aren’t sure if it will work out.”