In the saddle with Calli Lipping 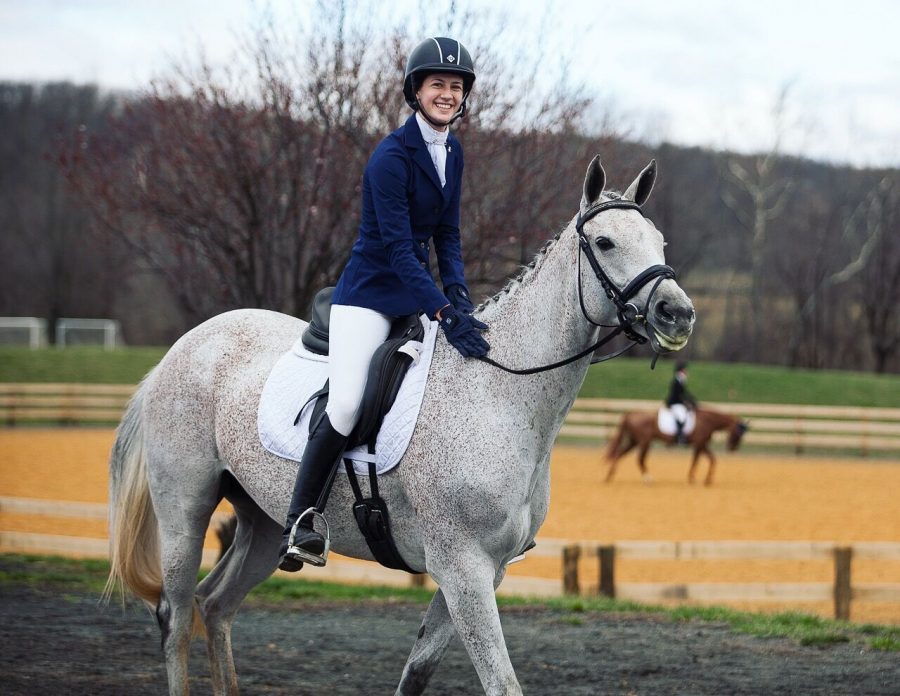 Lipping smiles after her Dressage performance at the Morven Park Spring Horse Trials in April, 2017. Morven was the first event of the spring season, and though Dressage isn't one of her horse, Maggie's, strengths, the competition went super well, she said. Photo courtesy Calli Lipping.

Junior Calli Lipping has a lot of words to describe horses. When she first saw a barn full of horses, she thought they were “such amazing creatures.” When she watched her first professional eventing competition, she remembers the horses running like “machines.” When she first competed with her own horse, Davie, she thought he was “the most beautiful little mover.” Above all, her horse Maggie is her “best friend.”

But the day before a qualifying competition this past September, Maggie was very “agitated.” Running through a practice cross country course at her trainer’s barn, Lipping and Maggie were racing downhill toward a four-foot jump.

Maggie went one way. Lipping went another, landing directly on her head.

When she woke up the next morning, Maggie was too injured to compete. Lipping, who suffered a concussion from the fall, still went to the competition to cheer on her friends.

“Riding isn’t supposed to be glamorous, so when I fell off, I wasn’t knocked out, and therefore I was fine,” Lipping said. “I’ve been taught that you can work through a lot of pain, especially since in the moment, I’m always really happy and have a lot of adrenaline pumping.”

Though this mindset has been dangerous for Lipping in the past, she said it’s taught her a crucial lesson: the importance of grit.

“I think hard work is going to get people places way more than talent is going to,” Lipping said. “When I’ve been on the ground, in a lot of pain, I’ve always gotten up because I want to do well so badly, and I know that there’s no other option for me to get there.”

Her trainer, Lillian Heard, joked that Lipping “can even work too hard sometimes.” This, combined with her innate talent, is why Lipping has been so successful, Heard said.

“Calli is a very natural rider, and that’s something I wasn’t myself,” Heard said. “I had to learn it the hard way, but her instincts are just perfect, which is really unique and special.”

Lipping has been riding horses since she was six and competing since she was ten. She has traveled across the country to compete in national tournaments and hopes to make it to the Junior Olympics this year. She competes in eventing, a type of riding that includes three disciplines: dressage, cross country and show jumping. Dressage involves performing a series of fixed movements in front of judges, cross country consists of a two- to four mile-long obstacle course and show jumping includes a series of jumps in an enclosed area.

When she’s not competing, Lipping practically lives at the barn. On the weekends and over the summer she works at a barn in Pennsylvania, and is spending this winter living in South Carolina to work and learn at her trainer’s barn.

“At this point, riding is a part of who I am, and I don’t know where I would be without it,” Lipping said. “It’s a sport that has taught me responsibility, brought me to some of my closest friends and given me this constant state of adrenaline that nothing else can top.”

Lipping began her equestrian journey—which she jokingly describes as “the beginning of the end”—when she was two years old.

“When you’re a kid, horses are like unicorns,” Lipping said. “I just wanted to touch them and play with them, and then I wanted to ride them.”

Before she started training in eventing, she competed in a more traditional discipline of riding where scoring is based more on presentation and style than the rider’s skills. Though this type of competitive riding helped Lipping advance her skills, she still found herself falling behind her peers. Her wealthier competitors could afford expensive lessons and higher quality horses—horses that are so highly trained, they can win a competition with almost any rider.

“When you’re competing with the top .01 percent of the nation, you start to realize how privileged you are but also how much more people have than you,” Lipping said.

Even without a highly trained horse, she excelled. At one of her early competitions, Lipping was the only rider under 18 competing in her division. Despite her age and the fact that Lipping had only been riding for three years, she won.

“From that point on, I knew she was never going to stop,” her mother, Liz Callihan, said.

When she started training in eventing—she said her “need for speed” prompted her to make the switch—she finally bought her own horse, Davie. But at their first competition together, she placed dead last.

She performed well in dressage, but in the cross country section, Davie panicked and hesitated before every jump.

After this competition, she figured out Davie’s strengths and weaknesses and grew from there, learning to be grateful for his dressage skills and learning to adjust to his “spookiness” during cross country.

“He would just be scared of a blue flower under a fence, or something stupid like that, so I learned to be aggressive,” Lipping said. “It kept me really hungry for it, and it was very humbling because when he would do well, I would be on cloud nine.”

As her riding career picked up, she learned not only to how to handle setbacks, but how to make sacrifices. When her trainer Lillian Heard moved her farm to Pennsylvania full-time, Lipping decided this past fall that she would drive up every weekend to train.

She struggled to balance her two lives; she never got to hang out with her school friends on Saturday nights, struggled to get her schoolwork done and had to quit being a writer for the Black & White. But she said she doesn’t regret any of it.

“It was so worth it because Maggie and I continued to get the prestigious training that we love and need,” Lipping said. “I wouldn’t trade it for anything.”

Lipping has big plans for the future; she hopes to qualify for the North American Youth Championships and the Junior Olympics this year, and she wants to advance to international competitions before she graduates high school. She hopes to own a barn, like Heard, when she’s older, where she could compete internationally, train other people’s horses and give lessons.

“I know it’s a pipe dream, but I think that pipe dreams get people the furthest,” Lipping said. “I just have to be smart about it.”

Without a good trainer near home, she decided to move with Heard to Aitken, South Carolina for the winter. She’s living in a house with four other riders from January through March.

Every 10 days, she drives home and goes to school for five days to catch up on tests and turn in big assignments. But everything else school-related—completing smaller assignments and learning the course material—she does online on her own.

She said her schedule is jam-packed.

“To work off the lesson fees, I work at the barn in the mornings up until noon or one,” Lipping said. “Then I get back to the house and do schoolwork up until like five at night so that I can have the nights to be free to be a normal person. I think that’s important.”

To her, the hardest part of the arrangement isn’t missing schoolwork; it’s the days she’s home when she doesn’t get to ride a horse all week.

“I like to ride as much as possible because that’s my lifeblood,” Lipping said. “I wouldn’t call myself a workaholic, but I just really get upset when there’s nothing to do.”

It isn’t just her hopes for the future that motivate her. It’s the way she feels when she’s riding, galloping on a long stretch of a cross country course and hearing nothing but the wind whooshing past and her horse’s hooves hitting the ground. It’s the quietness of the barn at night when she checks on the horses and hears nothing but the sounds of swishing tails and the horses munching hay. It’s even winding down after a long day with a walk in the woods with her friends and her horse.

“I don’t think I’ve had a monumental specific moment that’s been my favorite, but the little moments are really big for me,” Lipping said. “They remind me why I do it.”