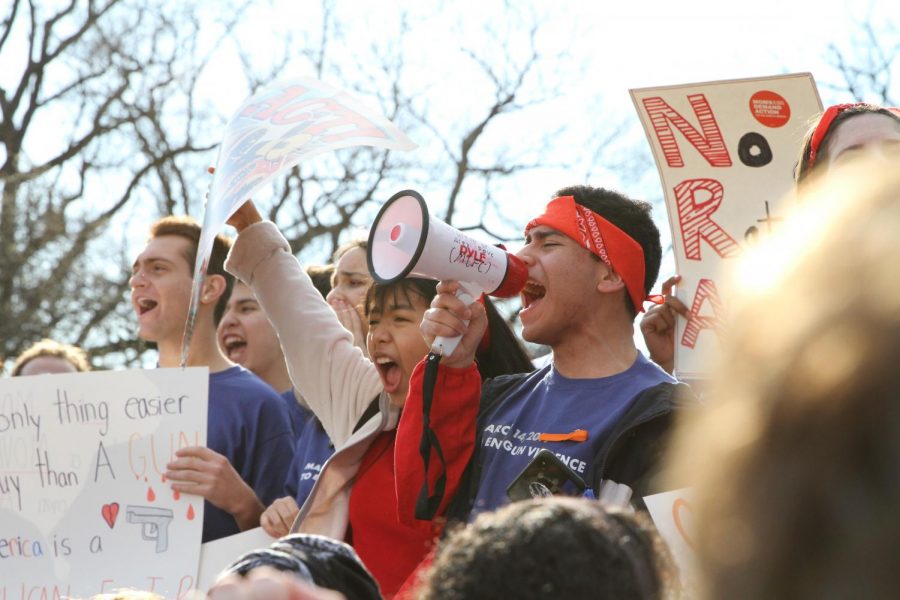 MoCo Students for Change members led thousands of local middle and high school students in a walkout Mar. 14. The walkout was in support of a bill in the Senate that would require background checks for all gun purchases.

By Max London and Rebecca Hirsh

Several thousand students, including about 100 from Whitman, walked out Thursday from middle and high schools around the DMV area to demand stricter gun safety laws, specifically urging the Senate to pass a bill requiring universal background checks. Protesters gathered in front of the White House to observe 17 minutes of silence for victims of gun violence and then marched to the Capitol—chanting along the way—to listen to speakers, including a mix of Congress members and student activists.

MoCo Students for Change (MC4C)—a local organization started following the Parkland school shooting in February 2018—organized the protest. Many Whitman students participated in a similar walkout last year; however, unlike last year, those who participated this year faced an unexcused absence.

Most participants took the Metro to D.C., and MC4C raised about $7,000 to rent buses for students at schools not located close to public transit lines.

At Lafayette Square, students gathered around the White House fence shouting, “No more silence, end gun violence,” “What do we want? Gun control. When do we want it? Now!” and “Hey, hey, ho, ho, the NRA has got to go!” Reporters and cameramen surrounded the scene, interviewing students and taking pictures.

At 10 a.m., march leaders ushered everyone to sit down and observe 17 minutes of silence for the 17 victims of the Parkland shooting. By then, thousands of students were congregated in the Square. Most students sat silently facing the White House, but some in the crowd turned their backs.

“The silence was really powerful,” senior Aarushi Malholtra said. “Typically, marches and protests are loud and passionate, but sitting there silently while holding signs and holding hands up with thousands of other students—that said more than any chant or speech could.”

After the 17 minutes ended, students marched across Pennsylvania Ave. and down 15th St. toward the Capitol. As the students walked and chanted, people came out of buildings to watch; a group of visitors at the Newseum gathered on the balcony to cheer students on.

Once at the Capitol, students gathered on the lawn and waited for speeches to begin. MC4C leaders read off names of local high schools, and students cheered when their school was called. Around 11:30 a.m., students were told to sit down and MC4C co-president Dani Miller took the stage.

“We are here today because we have to be,” Miller, a Churchill senior, said in her opening address. “Because we have been failed by every single institution that’s supposed to protect us. By the people in that building right behind us, by previous generations, by anyone who ignores our pleas to survive. Our friends are dying. So we march.”

MC4C leader Giovanni Gutierrez, a Peruvian student from Rockville High School, split his speech between English and Spanish, repeating some phrases in both languages for emphasis. Gun violence survivor Kate Ranta spoke about her history with domestic violence and how she and her son, William, escaped her estranged husband.

Jayla Holdip from Pathways2Power brought up the prevalence of daily gun violence in black communities in D.C. The Thurgood Marshall Academy student started Pathways2Power with peers after the death of two classmates in 2017 to gun violence. The organization addresses the root causes of gun violence in the area, like mental health issues, community health, violence and education, Holdip said.

“I am here for every teen slain in the District whose murder was not given enough attention by our elected officials just because of the area in which they reside. Kids being murdered is everyone’s problem,” Holdip said. “The glory of the monuments, memorials and museums always find a way to overshadow D.C.’s dark reality. D.C. is more than the neighborhoods you see on the news every day. D.C. is 32 homicides in 72 days.”

Sen. Chris Murphy (D-CT) has been a vocal advocate for gun control since 2012, when a gunman opened fire and killed 20 kids in Sandy Hook, CT. On June 15, 2016, Murphy launched a filibuster on the Senate floor, promising to hold the floor for as long as possible or until Congress acted on gun control legislation.

“I was pretty lonely in 2012 and 2013 when only a couple of us were out there, preaching the gospel of how we attack gun violence,” Murphy said. “Now, adults have handed the keys of this movement over to you, and you are now in charge of making sure we save millions of lives in this country.”

Former-SMOB Matt Post, now the national field strategist for March for Our Lives, spoke last. During his time as SMOB last year, Post earned national attention for his involvement in the movement to demand stronger gun control.

“I’m here to say to every politician, pundit and cynic who thought this movement would die or fade away—we are still here,” Post said. “Our movement is rooted in the idealism of youth, the belief that we can change things together. With all our hope, with all our despair, with all our rage, we are a new and unsettling force in American politics.”