The future of the gun control movement 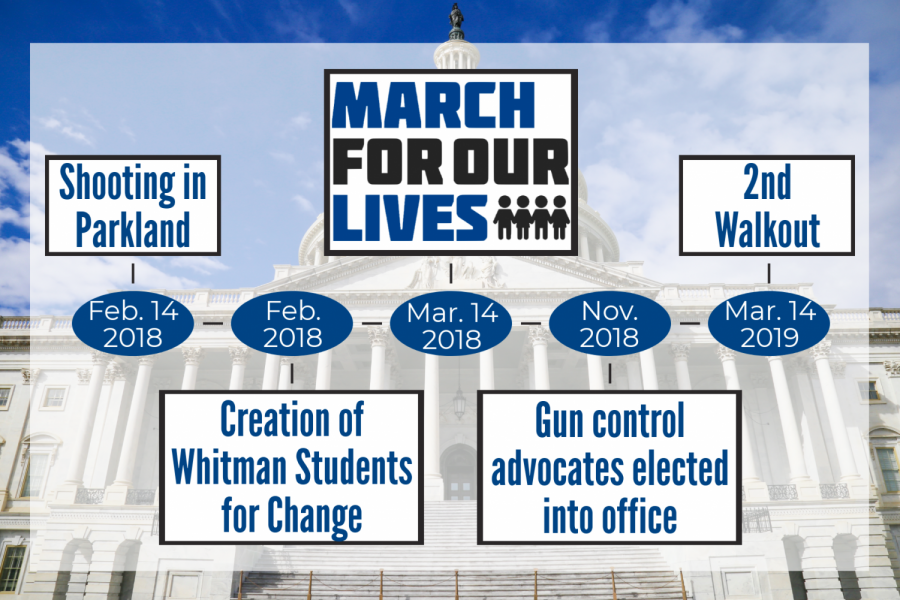 Thousands of students walked out of school nationwide last March to memorialize the victims of the Parkland shooting and protest inaction of legislators in passing gun control measures. This year, Montgomery County students are planning to walk out of class again Mar. 14.

MoCo Students for Change will lead Thursday’s walkout. Students created the organization days after the Parkland shooting last February under the original name “MoCo for Gun Control.” Leaders from the organization plan to gather students at the White House and the Capitol to demand gun control legislation; students will specifically be supporting S.42, a bipartisan Senate bill aimed at expanding background checks. The House recently passed the sister version of the bill, H.R.8.

“Everyone—all the activists—have really changed the nationwide conversation about gun safety since last year,” MoCo Students for Change Co-President Michael Solomon. “The goal of the walkout is to continue that and to really inform people about what tangible impact we can have with these bills that just passed the House.”

Following the Parkland tragedy last year, students across the country mobilized to demand gun control legislation. Despite national support for the movement, progress since has been sporadic and difficult. Now—over a year later—students push to re-energize activists and garner new media attention and show the country that the gun control movement has no intention of slowing down.

Just days after the Parkland shooting, students formed advocacy groups across the country. Existing national groups like the Brady Campaign, Giffords and Everytown for Gun Safety worked to encourage participation among outraged and grief-stricken citizens. Students created the National Association of Students Against Gun Violence to rally students nationwide. Then-junior Rachel Zeidenberg started the Whitman NASAGV chapter days after, which has since been renamed Whitman Students for Change. Parkland students have spearheaded much of the activism, lobbying members of Congress, sitting down for interviews on national television and organizing communities.

When 200,000 Americans took to the streets of Washington D.C. Mar. 24 last year in the student-led March for Our Lives, few could doubt the power of the gun control movement.

Yet in the year since, national legislative progress hasn’t come easily. The House’s H.R.8 bill, passed Feb. 27, is the first significant gun control legislation passed on a national level since Parkland, although notably also the first in over two decades. The House also passed a bill Feb. 28 to extend the deadline for federal background checks to be completed, allowing more time for officials to flag suspicious purchasers. But with the current Republican Senate, many doubt either bill will become law.

“Student engagement and civic action has decreased a lot, which is concerning because gun violence is still a large problem,” freshman Karla Stephan said. “People also don’t really know what the current gun safety proposals in Congress right now are.”

Change has occurred at the state level, most notably, although not surprisingly, in Florida. After weeks of pressure—including activist David Hogg’s social media plea for tourists to boycott the state of Florida until common sense gun control was passed—Gov. Rick Scott (R-FL) signed a school-safety bill that put restrictions on guns like raising the minimum age to buy rifles from 18 to 21, banning bump stocks and extending a three-day waiting period for handgun purchases to include long guns. In total, legislatures from 26 states and DC have passed 67 new gun safety laws, according to Giffords Law Center.

The Maryland General Assembly passed three bills last years relating to gun safety: a red flag bill which allows law enforcement and families to petition the courts for an order to temporarily restrict firearms access to people believed to be a risk to themselves or others, a law that requires convicted domestic abusers to turn in their guns to law enforcement or a firearms dealer and a third law banning bump stocks.

In the 2018 elections, campaigns around the country focused on gun control. Members of the U.S. House of Representatives Lucy McBath (D-GA), Jennifer Wexton (D-VA), Abigail Spanberger (D-VA) and Elaine Luria (D-VA)—who had run on gun control platforms—won their elections.

Activists look to reenergize the movement with walkout, lobbying efforts

For some activists, Thursday’s walkout represents more than remembering Parkland victims and voicing support for the current legislation in Congress. Stephan, one of the MoCo Students for Change Whitman representatives for the protest, sees the walkout as a benchmark of the enthusiasm still remaining for the gun control movement.

“The march is going to be a test for whether the movement is still strong,” Stephan said. “Based on the turnout and the participation, it’s definitely going to reflect on people’s interest in the movement and Congress’ perception of what the people care about.”
But others, like MoCo Students for Change member Anna O’Keefe, feel the walkout will be a powerful statement regardless of turnout.

“Our success isn’t going to be defined by numbers,” O’Keefe said. “We will be generating a ton of media attention, so people are really looking to see what the younger generation is going to do. People need to see that we still are fighting.”

Both Whitman Students for Change and MoCo Students for Change now focus on more issues than just gun control. The latter organized protest efforts against Brett Kavanaugh’s nomination for Supreme Court justice and urged the Board of Education to prioritize diversity in schools.

“My main focus is on advancing gun control because gun violence is one of the biggest issues facing our country,” O’Keefe said. “But Parkland has sparked student engagement, not only for gun control, but also with issues like climate change and racial justice.”

Thursday though, gun control will take center stage. Solomon is encouraged by gun control progress at the state level, and he believes the movement has shown no signs of slowing down.

“We’re just getting started,” Solomon said. “Progress doesn’t happen unless we speak out and continue to speak out. And this walkout will remind lawmakers that the gun control movement is still pushing forward.”