The Black and White • March 11, 2019 • https://theblackandwhite.net/63354/news/teachers-march-in-annapolis-for-higher-salaries/ 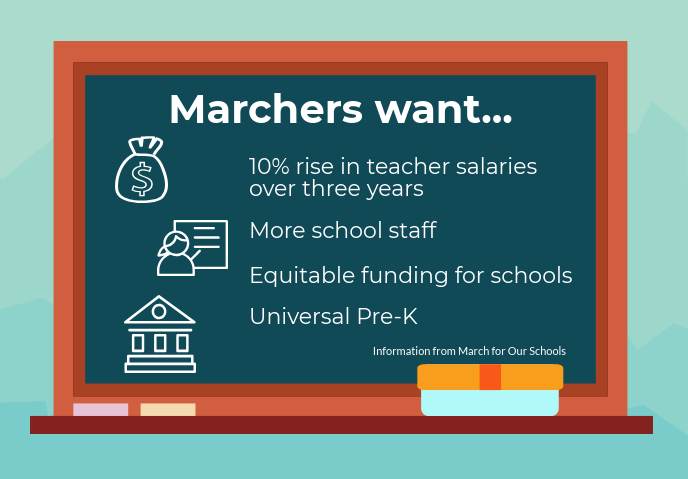 Around 5,000 Maryland educators, parents, students and community leaders will attend the March for our Schools in Annapolis Mar. 11 in support of legislation that would raise teacher salaries by 10 percent over a three-year period. The Maryland State Educators’ Association, the union representing teachers in the state, is organizing the march.

Marchers are supporting a bill introduced last Thursday in the Maryland Senate and House of Delegates which seeks to fill a $2.9 billion budget shortfall. As part of the fix, teacher salaries would be raised by three percent each year for two years and by four percent the third year.

“Nationwide, education is underfunded and our current governor doesn’t seem to have our interests in mind,” she said.

Apart from the pay raises, teachers are advocating for hiring more school staff, including counselors and psychologists, universal pre-k and equitable funding for schools.

Teachers will meet at 6:00 p.m. at the Navy Stadium in Annapolis and march to Lawyer’s Mall in front of the Maryland State House. The Montgomery County Educators’ Association, the county teachers’ union, will provide bus transportation to Annapolis.

The march follows the lead of other major teacher demonstrations in states like West Virginia, Oklahoma and Arizona. But unlike other demonstrations, Maryland educators say they will only be marching—not striking or walking out.

Montgomery County Executive Marc Elrich will be attending the march alongside other public figures. A former elementary school teacher, Elrich was elected in 2018 with a strong endorsement from the MCEA. He stirred up controversy in January when he proposed a budget that would cut $25 million in funding from Montgomery County Public Schools.

Multiple schools in the county are sending large numbers of staff and students to Annapolis. Ninety-five people from Montgomery Blair High School will attend the march.

In contrast, Whitman teachers will mostly sit this march out.

“It’s really hard to do anything on a weekday,” French teacher Michelle Beach said. “If they had done something on the weekend, that might have been easier.”

Mobilizing teachers is more difficult at Whitman than other schools, Whitman’s head representative for the MCEA Danielle Fus said.

“We’re very lucky that the Whitman Foundation gives us a lot of what we need and makes up a difference from the funding that we have from the county,” Fus said. “Sometimes it’s harder to get some teachers and parents to turn out.”

In addition to pay increases, Roots will attend the march to support the union. She sees great benefits to being a part of a union as powerful as the MCEA, she said.

“You have more power as a collective body than you do as an individual,” Roots said. “As with any union, it’s only as good as its members. If we don’t show up it doesn’t matter how strong it is. We are the union.”