The Black and White • March 9, 2019 • https://theblackandwhite.net/63284/feature/snow-day-sno-problem-qa-with-michael-lipin-manager-of-d-c-snowball-fight-association/ 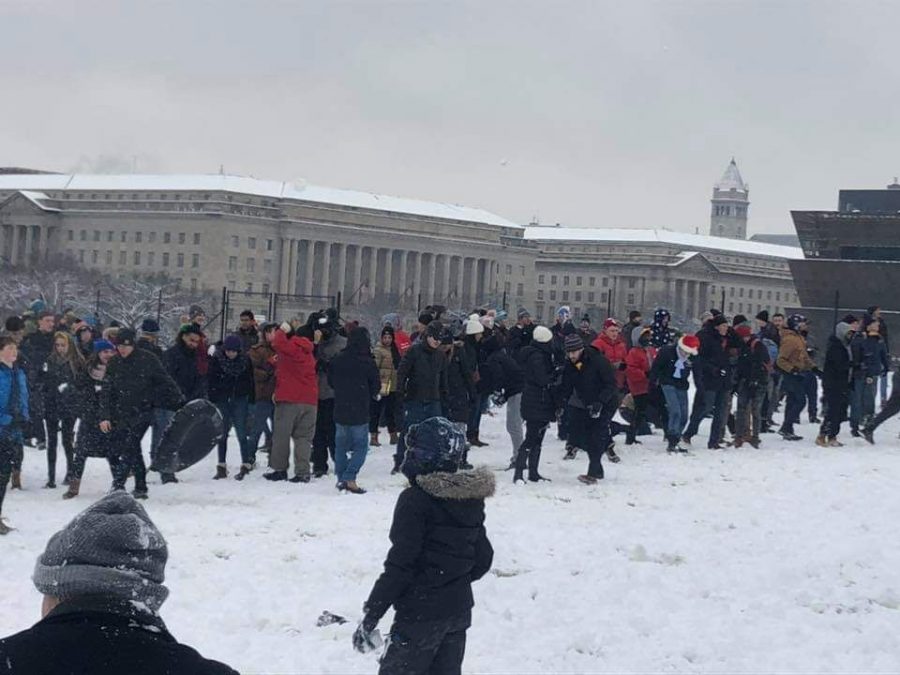 The D.C snowball fight association gathers on the Washington Mall Jan. 13 to pelt one another with snowballs. The DCSFA was founded in 2009, and people of all ages attend events.

Michael Lipin founded the D.C. Snowball Fight Association in 2009. The organization coordinates snowball fights in various locations across Washington D.C. each winter. Since 2009, Lipin, along with two other managers, has organized 13 snowball fights. Some attracted more than 1,000 D.C. locals of all ages. So far this year, the DCSFA has organized one fight, which took place on the National Mall on January 13.

The Black & White: What inspired you to start the DCSFA?

Michael Lipin: Having grown up in Hong Kong—a place where it didn’t snow—I felt deprived of having the fun that one has as a kid in the snow. When I moved to D.C. in 2007, I got excited. Whenever I had a chance to be in snow, I felt the urge to create a snowball and throw it at something—or nothing.

December 2009 was the snowiest winter in D.C. on record, and I thought, “Why not get some friends together for a snowball fight in Dupont Circle?” A couple of my friends showed up that day, and we threw some snowballs around for around half an hour. Someone said there was a bigger snowball fight happening at 14th and U Street. We went over there, and several hundred people were going at it on both sides of 14th Street with traffic occasionally going through the battle zone. I thought that was a lot more fun, to have so many more people around.

When February 2010 came along and another blizzard was forecast, I thought we should try it again. My friend and I started to promote it on Facebook. Over the course of two days before the storm hit, we went from about 30 members of the group to more than 5,000. On the actual day, the Washington Post reported there were more than 2,000 people there. That was basically our official launch of the group. I decided to create a Facebook page. I called it “The Washington D.C. Snowball Fight Association.”

B&W: How do you spread your message and advertise your events?

It’s covered on the TV news—it’s a fun story or a kicker at the end of a newscast, or the radio, sometimes on the web. The Washington Post often posts a lot of photos from our events, so people find out about it, if not from Facebook or social media, through newspaper or TV coverage.

B&W: What was your favorite snowball fight and why?

ML: For several of our events, a DJ showed up and actually played music. We had that twice, the same guy. He just volunteered; he didn’t even tell us he was coming, he just came and played the music. We loved it. The first time he did that, it was an evening snowball fight. After the battle ended, everyone just started dancing on the snow in a circle.

B&W: What’s your process for picking venues and determining whether a day is good enough for a snowball fight?

ML: We have a couple of venues that we’ve alternated between over the years; Dupont Circle Park, Meridian Hill Park, the National Mall, the grass by the Washington Monument—those have been the four sites that we’ve used so far. You really need a good seven, eight, nine inches or more to do it in the Circle because some of it’s concrete, and you need a lot of snow piled up on the concrete to be able to have fun with it.

If we got only a couple of inches of snow—four or five, let’s say—we try to go for a wide, grassy area like the National Mall, where you have a lot of good snow spread out over a large area. It makes more sense to do it there.

We also want somewhere that’s not too far away from a Metro station; we want to make it as accessible as possible to people who are coming from other parts of the district or beyond.

B&W: Snowball fighting is often considered to be for kids. What do you want adults to take away from your snowball fights?

ML: Obviously kids naturally enjoy snowball fighting, but I think adults enjoy it too. Their inner kid gets to come out and play. It’s a way to relive one’s childhood; it’s a way to let off steam. It’s a kind of a thrill you get from pelting complete strangers and being pelted by complete strangers, and all of you are enjoying it. Some people dress up, put on costumes. It becomes a kind of festival.