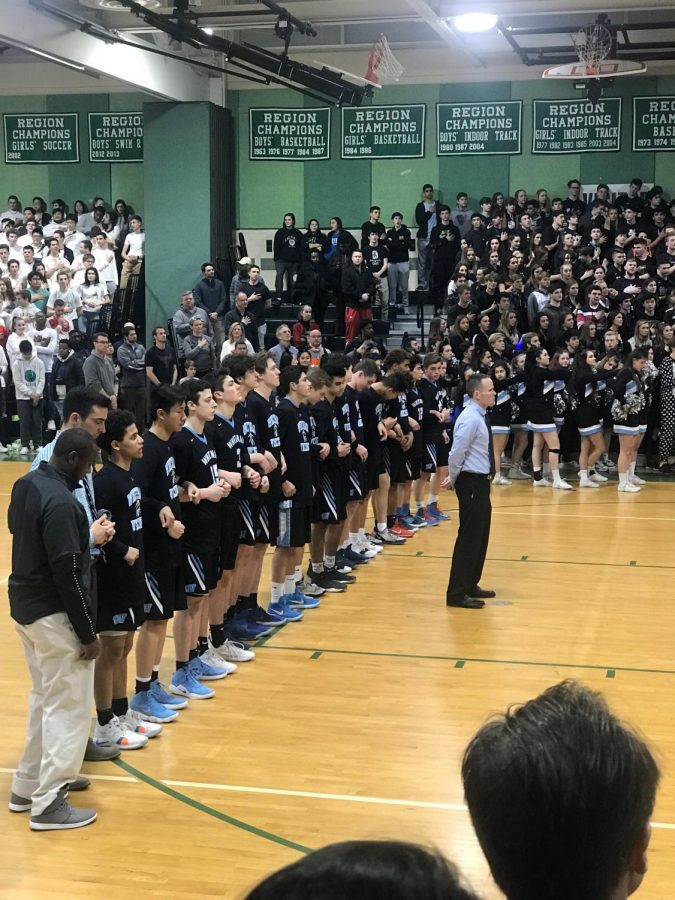 The boys basketball team lines up for the national anthem before the team's playoff loss against the Walter Johnson Wildcats. The team ended their season in a heartbreaking overtime loss, but the players are proud of what they accomplished this season. Photo courtesy Blake Layman.

With 20 seconds left in overtime of the boys basketball team’s 72–65 loss to the Walter Johnson Wildcats in the section final, all of the starters were pulled of the court for one last time. The crowd chanted, “Thank you seniors,” to show appreciation for the hard fought efforts from the seniors throughout the season and in their final games as a Viking.

The game started off with a three by guard Jaden Pierce. The team played well offensively throughout the quarter, but the refs called controversial fouls on the Vikes, putting the team into foul trouble for the rest of the half. The team stayed composed and were able to take a 12–10 lead into the second quarter.

The squad went on a 13–0 run to start the second quarter with the help of guard Kai Holloway who hit a three pointer to ignite the crowd and force the Wildcats to call a timeout with 5:00 left in the quarter. However, the Wildcats did not panic, coming back at the end of the quarter to take a one point lead into halftime after WJ guard Dwonn Williams hit a layup, forcing the Vikes to trail 28–27.

The third quarter was a back and forth battle between the two teams. With 2:30 left in the in the quarter, guard Brendan Shaver hit a three to put the Vikes up 42–37. The Wildcats came back to tie the game at 44 at the end of the quarter, but guard Josh Weinberg hit a three to give the Vikes a 47–44 lead heading into the fourth quarter.

The fourth quarter saw multiple lead changes as well. Shaver hit a layup for the Vikes with 1:40 remaining in the game to give the team a 55–53 lead. On the next WJ possession, the Wildcats turned it over to give the Vikes a chance to pull away. However, Shaver was called for a charge which gave the ball back to the Wildcats who responded with two free throws from center  Abdel Nasser to tie the game.

With five seconds remaining in the fourth quarter, WJ’s Williams drove to the hoop, but the Vikes stripped the ball, giving the Wildcats an inbounds with one second left on the shot clock. They were not able to get the shot off in time, resulting in a shot clock violation which gave the Vikes a final opportunity to score and win the game. With 1.3 seconds remaining in the game, Weinberg launched a half court shot, but it hit off the backboard and the game went into overtime tied at 55.

The Wildcats got on the board first in overtime on a three from forward Hank Roll to give WJ a 58–55 lead. On the same play, a foul was called on Vikes center Michael Bass which put Nasser at the line. He hit both free throws for WJ and put the team ahead 60–55 with 3:20 left. The Vikes responded with a three of their own by guard Jaden Pierce to cut the deficit to two points with 2:50 left. From there, the Wildcats pulled away and the Vikes could not come back as they lost by seven points and ended their miraculous season.

Coach Lun said that he is proud of is team despite the outcome and excited for the next season.

“I love this team,” Lun said. “We played hard, competed, and had a great season. We got big time contributions all season from juniors and seniors and we will have an experienced backcourt coming back next year, but I am proud of our program.”