The Black and White • March 5, 2019 • https://theblackandwhite.net/63246/uncategorized/speech-debate-has-strong-finishes-at-harvard-and-districts/

Speech & Debate has strong finishes at Harvard and Districts 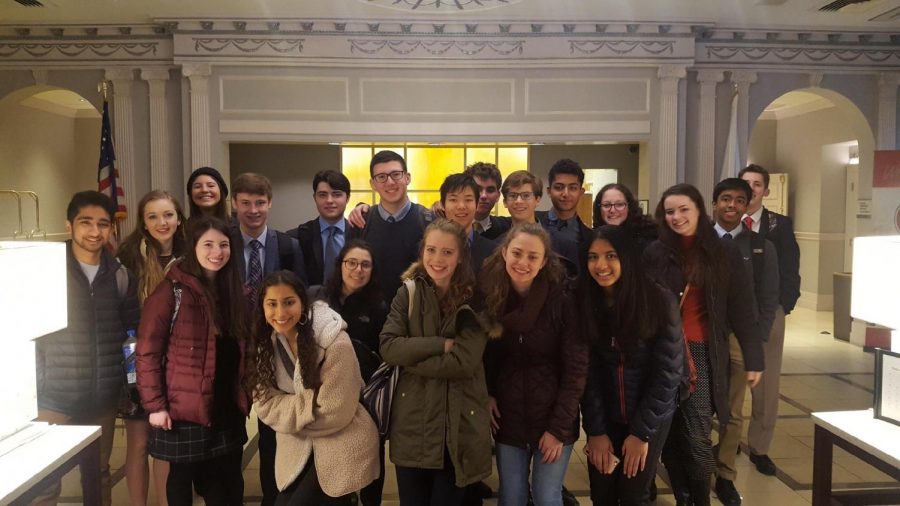 The public forum team poses for a picture at the hotel before going to rounds. The Harvard Tournament is traditionally freshmen's first exposure to traveling with the team. Photo courtesy Ethan Singer.

The Speech & Debate team wrapped up February with successful runs at the Harvard National Forensics Tournament and Chesapeake District Tournament. Multiple debaters and speech participants qualified to represent the Chesapeake area at Nationals and completed their qualifications to the prestigious Tournament of Champions in April.

At the Chesapeake District Tournament over the weekend of Feb. 24 and 25, junior Angel Zhang placed second in the speech event oral interpretation. The team of Feuer and Sylvester placed third in public forum debate. The top three competitors in each event qualify to represent the Chesapeake area at the end-of-year National Speech and Debate Tournament in Dallas, TX.

At the Harvard tournament over President’s Day weekend, the team had strong results over a variety of age groups. In Varsity Lincoln Douglass, sophomore Ben Waldman advanced to triple-octafinals (top 64). Senior Daniel Harris advanced to quarterfinals (top 8), completing his qualification to the Tournament of Champions. In varsity Public Forum, seniors Zoe Kaufmann and Azraf Khan, as well as seniors Yasmeen Gauri and Maeve Trainor, advanced to triple-octafinals. Seniors Hannah Feuer and Elizabeth Hepburn advanced to octafinals (top 16), earning their second gold bid to the Tournament of Champions and completing their qualification.

“Harvard is one of my favorite tournaments to go to as public forum debate because the whole team has an opportunity to go together,” junior Allie Rosenstein said. “For many of the freshmen teams, it’s their first time debating on the national circuit, so it’s a unique time to connect with them.”