The Black and White • March 3, 2019 • https://theblackandwhite.net/63209/sports/boys-and-girls-basketball-shine-in-first-round-of-playoffs-heres-what-comes-next/

Boys and girls basketball shine in first round of playoffs; here’s what comes next 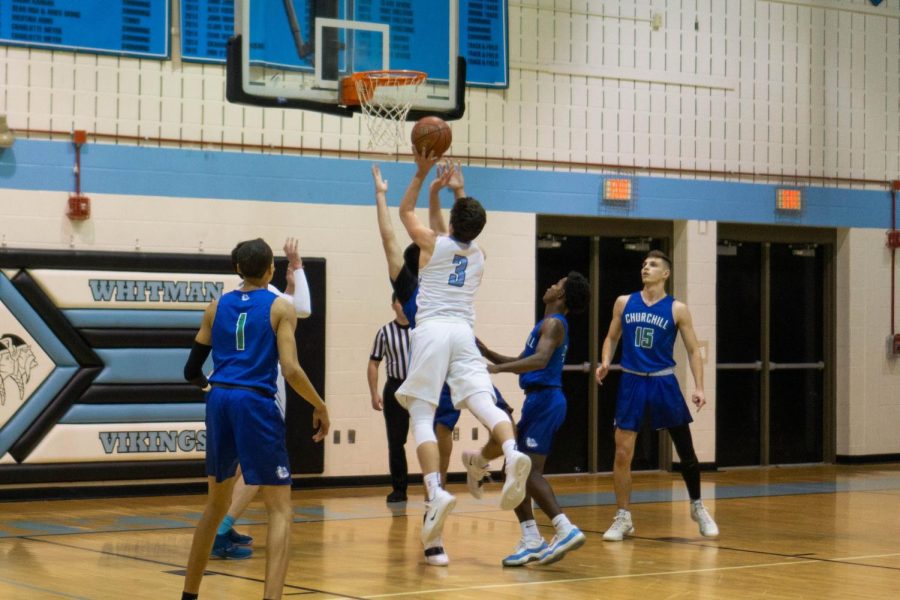 Senior Brendan Shaver drives for a layup against Churchill. The Vikes won both of their regular season games against the Bulldogs by double digits, and will face off with Churchill in the second round of playoffs tomorrow.

The boys and girls basketball teams started playoffs off Friday with strong wins over Wheaton, 69-57 and 78-13, respectively. The boys will take on Churchill in the next round Monday, while the girls are set for a Tuesday battle with rival B-CC.

As both teams look to heat up and make deep playoff runs, we looked ahead at some potential matchups they might face.
Boys
The boys team entered playoffs coming off their seventh straight season with at least 13 wins, and they are seeded only behind Walter Johnson. Seniors Jason Lewis and Brendan Shaver lead the team in scoring with averages of 16.5 and 13.9 points per game. The team struggled with injuries down the stretch of the regular season—Shaver and starting center Rodrigo Ruiz each missed a few games—but both played in Friday night’s win and should be fully available for the rest of playoffs.

The boys defeated the 1-22 Wheaton Knights on Friday in a solid, 12 point win. The team was in control for most of the game and forced 24 steals. Senior guards Brendan Shaver and Jason Lewis led the team with 29 and 15 points respectively.

Churchill headed into playoffs on a two-game losing streak, dropping games to powerhouses Richard Montgomery and Gaithersburg, but beat Kennedy 55-43 to advance through the first round of playoffs. Whitman swept their season series with Churchill and won both games by double digits, including a 29 point win in January.

To advance to the third round of the playoffs, B-CC would have to take down top-seeded Walter Johnson. This may seem unlikely with an overall record of 9-14, but B-CC has a talented guard in Tulane commit Elijah Wood, and the Barons fell to the Wildcats by only two points when the teams played this January. Whitman split their season series with the Barons; the Vikes lost at home off a buzzer beater before a huge road win in which senior Jason Lewis scored a career-high of 30 points.

Walter Johnson enters the playoffs with a section best 16-6 record. However, their schedule included several games against weaker teams, and the Wildcats were blown out by Richard Montgomery, Paint Branch and Magruder. The team is led by Philip Stubin, a star sophomore guard who has scored double digits for the majority of their games.

A matchup against B-CC would be played at Whitman, while facing off against Walter Johnson would result in an away game for the Vikes.

Gaithersburg has one of the top backcourts in the region, led by sophomores Jao Ituka and Jordan Hawkins. Ituka and Hawkins both hold Division 1 offers and are averaging double digits every game. Boasting an overall record of 18-4, the Trojans are ranked 14th in the Washington Post and are responsible for Richard Montgomery’s sole loss on the season, which came in a 19 point blowout. The Vikes didn’t play Gaithersburg this year.

Richard Montgomery entered playoffs at a county best 22–1 overall record, with their sole loss coming from Gaithersburg. Whitman fell to the Rockets by ten during the only meeting between the two teams. Senior center Miles Gally—at 6’8”—and sophomore sharpshooter Ryan Cornish lead the Rockets.

Rest of the way: If Whitman advances to the Xfinity center, we’ll bring you an update then, but two teams from other regions to look out for are Annapolis and Eleanor Roosevelt.
Girls
The girls team has had one of their most successful regular seasons in recent years, led by seniors Elyse Lowet and Leia Till. Lowet recently broke the school record for most three-pointers in a single game, knocking down 11 in a blowout win against Magruder. The girls have also won a fair amount of games in a dominating fashion, with 58 and 50 point wins against Magruder and Wootton, and a 65 point win against Wheaton Friday. They entered the playoffs seeded only behind Churchill.

The Vikes blew out the 1–15 Wheaton Knights in a dominant offensive performance; they scored the most points of any game all season. The team held a 50-7 halftime lead and kept the Knights scoreless in the third quarter. Guard Anna Krush and forwards Carter McGloon and Drew Meadows all scored in the double digits.

After losing to B-CC last year in the second-round of playoffs, the Vikes have won every game since against the Barons, who entered playoffs 13-8. Sophomore guard Caroline Orza leads the Barons and is averaging double digits. Although Whitman swept the season series, both games were fairly close; the Vikes won the first by four and the second by 12. This rivalry matchup will be played at home.

Churchill has had one of their best seasons ever, with an overall record of 21–1. The Bulldog’s only loss came at the hands of Whitman; a Lowet buzzer beater clinched the game. The Washington Post ranked Churchill 11th in the DC area and the top team in Montgomery County. Junior Brittini Martin and sophomore Parker Hill account for the bulk of the Bulldogs’ scoring, and the team has had very few close games. Whitman split the season series; they defeated Churchill by one point away before falling by 11 points at home.

Clarksburg enters the playoffs as the first seed in their section with a 17–6 record. Yet the Coyote’s schedule was significantly weaker than Whitman’s, and included several narrow wins came against teams the Vikes blew out. Paint Branch also defeated Clarksburg by more than 40 points. If the Vikes can get by Churchill to the regional finals, they will likely have few problems with whoever emerges from the other section.

Rest of the way: If Whitman advances to Towson University, two teams to look out for include South River and Old Mill. Of course, we will bring you another update should that happen.