The Black and White • February 22, 2019 • https://theblackandwhite.net/63083/news/students-celebrate-african-american-history-culture-at-black-history-month-assembly/ 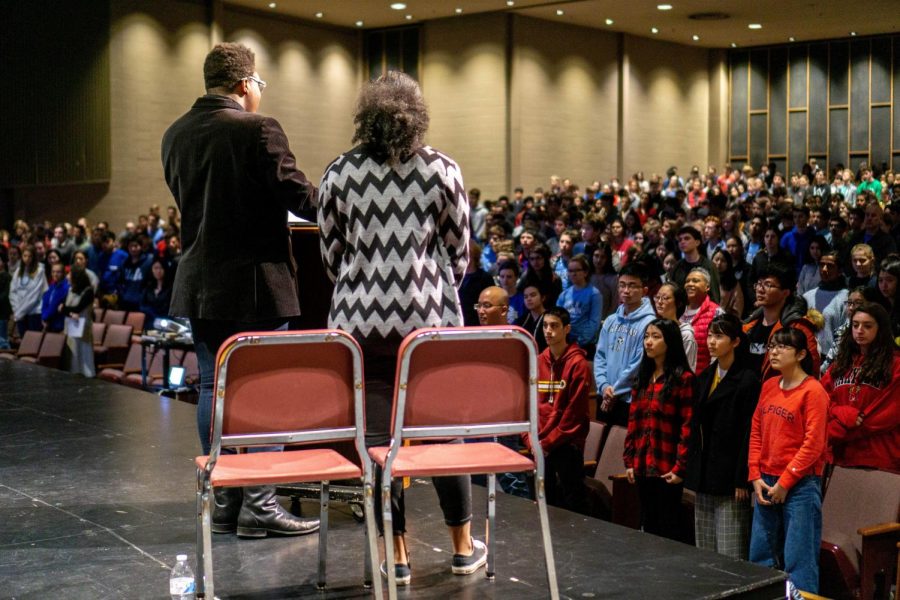 Students heard jazz music, a performance by the chamber choir and remarks from a guest speaker at the Black History Month assembly Feb. 13. The assembly—the first in recent years celebrating the month at Whitman—was organized by the Black Student Union.

Principal Robert Dodd opened the assembly, expressing how important this celebration of Black History Month was. Black Student Union president Skylar Johnson and member Reuben Pegues then introduced counselor Shalewa Hardaway, the group’s sponsor and one of the primary organizers of the event. Hardaway explained the history of the month, including how it coincides with the birthdays of Abraham Lincoln and Frederick Douglass. The month was first recognized by President Gerald Ford in 1976.

“We really need to make sure that we celebrate Black History Month,” Hardaway said afterward. “We embrace our students that are from that culture as well as really just making sure that we’re celebrating the achievements of people of color.”

Pegues then performed the song “Lift Every Voice and Sing,” which is often referred to as the “Black National Anthem.” Minority Scholars Program leader Khanya Dalton followed by reading “I’m Determined to Be Somebody Someday,” a poem describing hardships faced by African Americans. Jazz band performed “Get in Line” by Gordon Goodwin, and—after senior Obi Onwuamegbu introduced the history of Negro Spiritual—chamber choir performed the classic spiritual “Oh, Rock My Soul.”

Johnson said the Black Student Union had originally considered bringing in a bunch of outside acts, but ended up deciding to have a lot of students perform instead. Johnson thought the assembly turned out well.

“I think it’s something we kind of need as a school, and I think it ended up okay!” Johnson said afterward.

Later in the assembly, Black Student Union vice president Gabriel Thomas introduced the guest speaker, Ronnie Vanderhorst. Vanderhorst is the co-founder and executive director of Prepare Our Youth—an organization dedicated to promoting education and character development for young people, particularly Black youth. In his presentation, Vanderhorst emphasized the need for purpose in people’s lives and the importance of appreciating of all of humanity, regardless of how one identifies. Vanderhorst described several powerful moments relating to racial conflicts throughout history, such as the Little Rock Nine and the Mexico City Olympic protest. The assembly then concluded with a performance by drumline, in recognition of the significance of drums in African American history.

“I thought it was a really great way to showcase the diversity at our school that we don’t always get to see,” junior Emma Salafsky said. “It’s really important to support and learn about the heritage of our community.”

A previous version of this story incorrectly spelled Pegues. The story has been updated accordingly.