The Black and White • February 20, 2019 • https://theblackandwhite.net/63051/opinion/blogs/in-the-mood-for-some-board-games-on-your-snow-day-we-have-you-covered/

In the mood for some board games on your snow day? We have you covered 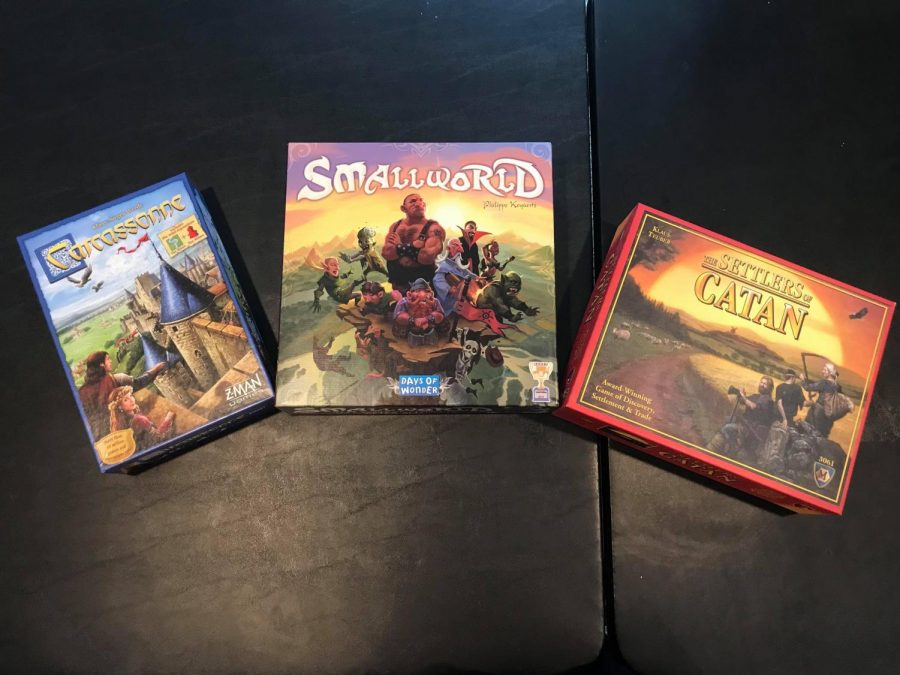 Spend your snow day playing board games with friends! Here are reviews of The Settlers of Catan, Small World and Carcassonne.

The day has finally come. MoCo Snow has gotten it right, and in the wee hours of the morning you wake up to hear there’s no school tomorrow. What do you do with all your extra time? If you were thinking “play some board games,” we think alike. So, to ensure your game-filled snow days are as fun as possible, I decided to break out the cardboard and review some games. I compiled a list of the three best board games to bring out when the snow starts to fall.

The Settlers of Catan

First released in 1995, Klaus Teuber’s “The Settlers of Catan” became the first modern board game to achieve large commercial success in the United States. It’s an old classic—the grandfather to which all later board games owe at least some of their success.

But what is it like to play? The concept is pretty simple: be the first to accumulate 10 victory points, which you earn by collecting and trading for resources and using those resources to build roads and towns. The game has a lot of hidden depth to it; while it’s easy to play and learn its rules, it’s difficult to master.

The core of the game is to trade, try to scam your opponents and make sure you don’t get scammed yourself. It’s that social trading rule that has solidified the game’s fame; play this if you don’t mind doing your friends dirty.

On the other hand, the random nature of the game can give some players an unfair advantage—once someone gets rolling, it’s hard to catch up. But overall, it’s a great game and the most well-known of the three.

The box describes this games tone best, “It’s a world of slaughter after all.” The concept is simple: move your army to different areas of the map and kill the other players’ armies in the process. Whoever has controlled the largest portion of the board for the longest time at the end of 10 turns wins.

Small World is possibly the best game in the “area control” (colloquially referred to as dudes on a map) genre, thanks to its unique drafting system. To play, start the game by selecting a fantasy race to play as, like the diplomatically skilled ghouls. Take troops and send them to fight against your opponents, often initially entering the board with force. A few turns later when you’ve overextended your army, you can discard them, draft a new one and start the whole process over again.

This is an incredibly fast-paced and fun game. Every part of the map changes hands at least a half-dozen times. This is both a pro and a con. If you want to play a slow paced game based around gradual strategy and movement, Small World might not be the best fit.

But if you enjoy chaos and anarchy, then Small World is for you.

“Carcassonne” replaces the long term strategic planning and cutthroat negotiations of “The Settlers of Catan” with rapid turns and a cooperative atmosphere. You and your opponents build the town of Carcassonne by placing tiles on a map and you score points by connecting geographic features, such as cities and roads, on those tiles. Win the game by completing the most and largest features.

The game is satisfying and soothing to play. Players get to watch as the town goes from nothing to a vibrant canvas of infrastructure. Tile after tile, players start roads and build until they are eventually completed. Cities, big and small, gradually become finished. Rivers flow their course.

Despite pitting players against each other, the game never feels hostile. Each player does his or her own thing, with very little interaction. The only possible downside is the game’s simple nature. There are usually only a few options on a turn, and it’s hard to plan more than a few turns in advance.

These are only a few of the countless fantastic board games released in recent years. Other honorable mentions include Pandemic, King of Tokyo, and 7 Wonders. If none of these games catch your interest, https://boardgamegeek.com is the best (albeit cluttered) database of board games in the world.