The Black and White • February 19, 2019 • https://theblackandwhite.net/63041/news/family-owned-bethesda-bagels-franchise-announces-new-store-location/ 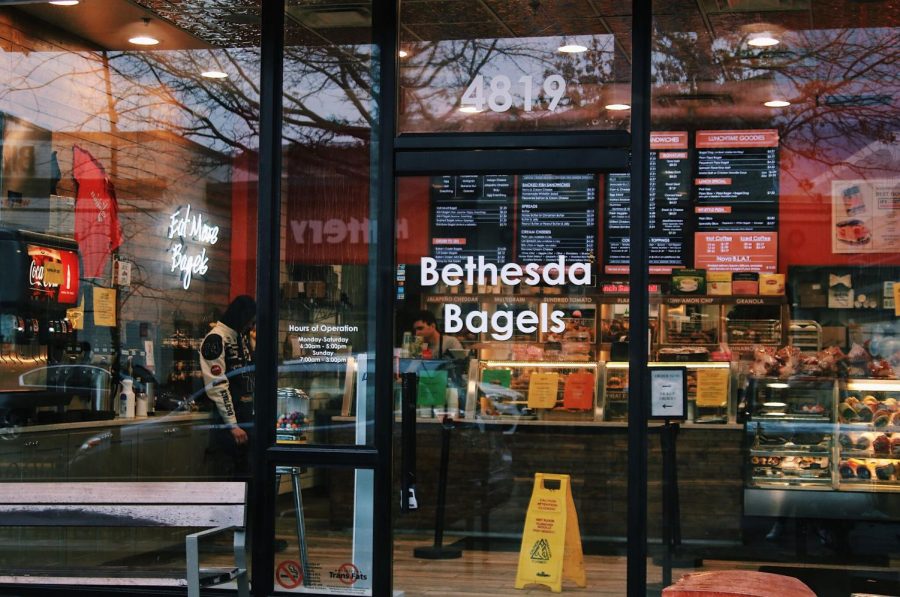 Bethesda Bagels is opening a new location at Wildwood Shopping Center. The local bagel chain is a family run business with an endearing past.

In late August or early September of 2019, the popular Bethesda Bagels franchise will open a fifth store near Montgomery Mall, the company announced Dec. 21. The Fleishman family, who started the company in 1982, began leasing the Wildwood property last month and is in the process of buying equipment and drawing plans for the store layout.

The family has had their eye on the Wildwood location on Old Georgetown Road for a few years now, Bethesda Bagels vice president Lee Fleishman said. The space is currently occupied by Coco Blanca, an upscale home decor and accessories store which closed Nov. 25. With their new location, they hope to draw customers from nearby Walter Johnson High School and expand their catering business. Currently, Bethesda Bagels sometimes has to turn down orders that are too big or too short notice, which is something the company hopes to avoid with the increased capacity of the new store.

When the Fleishman family moved to Bethesda 37 years ago, they couldn’t even imagine operating more than one store. They had only traveled to Bethesda a handful of times, and they had to start their bagel business from the ground up.

The first Bethesda Bagels opened in a storefront just a few doors down from their current Bethesda location on Bethesda Avenue. At the time in 1982, the store was surrounded by a liquor shop, a concrete factory and a Chinese restaurant.

Bethesda Bagels is a family affair: back in the late 70s, Steve and Fran Fleishman were dating and living in Queens, New York. They bonded over food; they loved searching for new restaurants and going out for dinner on the weekends.

After getting married in 1979, the couple traveled to D.C. one weekend to visit an old friend from New York. Steve casually asked his friend what he felt D.C. lacked in comparison to New York, and his friend responded without hesitation that the area needed a good, New York-style bagel place. Steve describes this moment to his kids today as when the “lightbulb went on.”

When the Fleishmans returned to New York, they convinced the owner of the bagel shop on the corner of their street to teach them how to run a similar shop in Bethesda. For the next few weeks, after the shop had closed for the day, the owner taught the Fleishmans how to roll bagels and make dough.

The couple had had no intention of moving to Bethesda before their idea of opening a bagel business. But, after realizing the opportunity moving presented, they felt as though they had to.

“We were very nervous, but we did it anyway. We loaded our stuff in a U-Haul and moved down here,” Fran said. “People were hungry for a good bagel, and we brought them the New York bagel.”

Once they moved to Bethesda in 1982, the couple began working on their business, tweaking the recipes they learned in New York. That same year, they opened their first store.

After the initial success of their first Bethesda location, the company began expanding to Gaithersburg and D.C. until they had six locations in 1996. Steve worked early mornings doing retail and late nights completing wholesale requests—selling to larger companies with bigger orders. Their bagel making process wasn’t as efficient as it is today, and machinery constantly broke down. The company eventually had to scale back retail to two stores and one wholesale location.

Once the Fleishmans’ four sons were all able to work for the business, the company resumed expanding. They opened a third retail store in Dupont and then a fourth in the Navy Yard and a fifth in Rosslyn. Now, the family is excited to open their Wildwood location.

Lee, who is the oldest brother at age 35, serves as vice president of the franchise and creates new recipes. Danny, the second oldest brother at 31, recently became president of the franchise, although Steve still acts as a supervisor. Noah, who is 23, graduated from the University of Maryland last spring as a business management major and is the general manager of each location. He visits all the stores throughout his six day work week, starting at 5:30 a.m. each day. Josh is the youngest and is a current senior at Winston Churchill High School. Because of his school schedule, Josh only works on the weekends.

Although Noah only began working full time in late 2018, he said he’s “in it for the long-haul.”

“I grew up in the business so I knew how hard my parents worked to provide the life that we have,” Noah said. “Even from a very young age, I’ve always wanted to pitch in and help out.”

All four Fleishman sons were introduced to the business early on in their childhoods. The younger brothers would come visit the stores after school and hockey practice on the weekends. Being a family business and having a personal touch sets Bethesda Bagels apart, Noah said.

“Customers come in and they tell me nowadays ‘Oh my God, I remember when you were this big,’ pointing at the ground, when I was basically two years old running around in the stores,” Noah said. “That’s great for a business because people really appreciate that feel that you bring to the stores.”

Although Fran took a step back from the store a few years ago, she still stops by and comes in to work on busy days. Danny’s wife, Kate, has stepped in as the head of catering, answering all emails and placing the daily orders.

Catering is important for Bethesda Bagels because they hold a prominent role in the local Jewish community. Every Saturday, especially during bar mitzvah season, they cater up to four kiddushin (a luncheon that follows the morning shabbat service). They also provide weekly deliveries to several temples in the area for after services. However, Yom Kippur—the holiest day in the Jewish religion that is often commemorated by people fasting during the day and then devouring an enormous “break-fast” meal in evening—is their “Super Bowl.”

Senior Aarushi Malhotra lives in Potomac and didn’t go to Bethesda Bagels until she reached high school. She remembers hearing about the Georgetown vs. Bethesda Bagels divide as an underclassman and wanting to try each company’s selection. Once she went to Bethesda Bagels, Malhotra was surprised by how much she liked it.

“It’s so weird to describe, but I’m so happy when I go to Bethesda Bagels,” Malhotra said. “It’s a pleasant, good meal. I just really enjoy myself.”

Junior Allie Rosenstein started working at the Bethesda Row location at the end of her sophomore year and continued through the summer. Rosenstein happened upon the job almost by mistake: she was turned down at Cava for being too young and noticed a “Now Hiring” sign in the window of Bethesda Bagels on the way back to her car.

Upon walking in, Rosenstein was taken aback by the camaraderie of the employees and the friendly atmosphere. She completed the application, which included basic questions along with “what’s your favorite bagel and why.” A week later, Rosenstein was working behind the counter taking orders, constructing bagels with an array of toppings and mopping floors.

Rosenstein quickly became friends with the other employees and began looking forward to going to her eight hour work days. She said it felt weird getting paid for something she had so much fun doing.

“[The Fleishman family is] really involved. They know what’s going on,” Rosenstein said. “If you’re an employee there, you know who you’re working for.”

For the Fleishman family, the bagel company wouldn’t be the same if they all weren’t involved. As a family business, their personal connections with customers set them apart from other chain stores, Lee said.

“Nowadays, in the age of the big box stores and the huge names and corporations with hundreds of locations, you’re going to get the exact same product no matter where you go; but it’s very dry and not very welcoming,” Lee said. “But when you walk into a place where you know the people who are owning and running it, it’s a very different feeling.”