The Black and White • January 14, 2019 • https://theblackandwhite.net/62639/sports/recruitment-or-rehab-sport-specialization-jeopardizes-athletes/

For student-athletes who specialize in a single sport, injuries are the norm 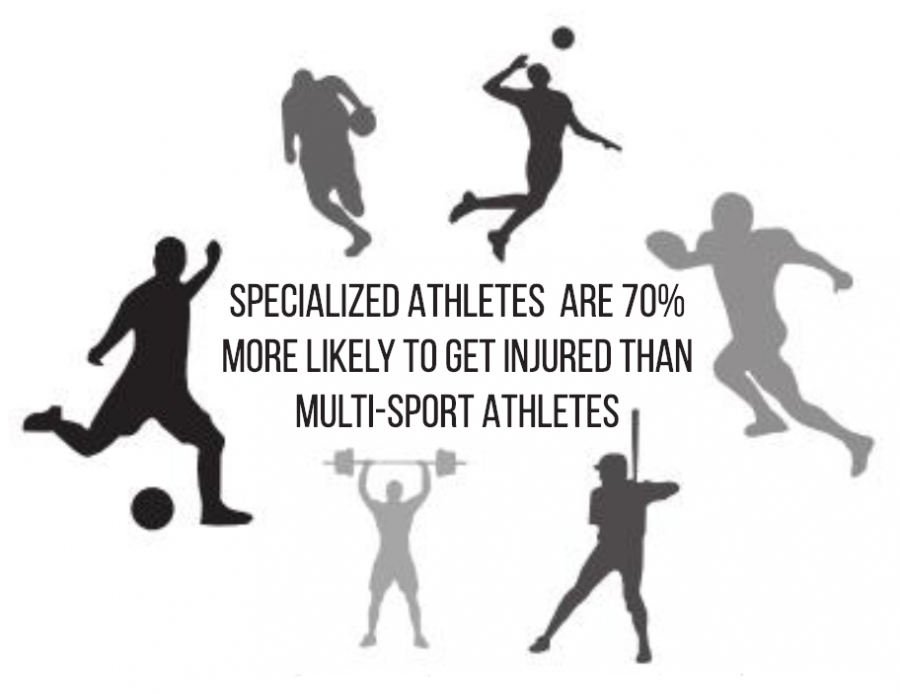 It started with a sprained ankle. Then another. And another. By the time senior Caroline Macdonald was 18, she had suffered three sprained ankles, a stress fracture in her foot and a torn ACL. Her injuries were cumulative, painful and season-ending.

But they weren’t surprising.

She’s spent 11 years stressing the same muscles: propelling herself down the field using her hamstrings and cutting using her calves. Since she started playing soccer when she was seven, her practice schedule has only intensified: she has team practices three to five times a week, personal training once or twice times a week, and occasionally spends time working out by herself.

High school athletes who specialize in one sport are 70 percent more likely to get injured in-season than students who play multiple sports, according to a study by the National Federation of High School Associations. This is because athletes who train for one sport year-round are repeating the same movements, adding more stress to their muscles and increasing the risk of overtraining, injury and even burnout.

“When these kids come in going at it hard and strong for one sport at a really young age, that takes a big toll on their body,” nurse practitioner Kelly Goodman said. Goodman is the owner of the group, Kelly Goodman, NP and Associates. “We see earlier injury, more joint problems—these kids are developing earlier arthritis.”

But when a young athlete’s goal is to play one sport at a high level, playing many sports can seem counterintuitive to athletes and parents.

Of 30 Whitman athletes, 18 said they specialize in one sport. Of those 18 students, nine sustained two or more injuries from training or playing their sport over their lives.

Sports specialization has become a growing trend at Whitman, girls basketball coach Peter Kenah said. However, he said the best players to come through the girls basketball program throughout his coaching career have been multi-sport athletes.

“It has exploded in the last 15 years,” Kenah said. “The emphasis is on college scholarships as well as club coaches pushing players at younger ages. They feel they have to do this.”

Wrestler Thomas Santora trains every day after school and lifts weights three times a week before school. On Saturdays, he wrestles and lifts. A senior, Santora has suffered multiple torn hamstrings, torn cartilage in his shoulder, a broken ankle, a broken hand, a rupture in a part of his knee and neck spasms.

Junior Kai Holloway is on the varsity football and basketball teams and has played both sports since he was nine years old. Although he’s played sports competitively for more than a decade, he’s only ever broken one bone. But athletes like Holloway—who play more than one sport—are in the minority. They’re dramatically less likely to get injured than single-sport athletes.

Goodman attributes the lower rate of injury for multi-sport athletes to the use of accessory muscles—muscles that athletes don’t use when playing their sport.

“All of your accessory muscles are getting used at all times,” Goodman said. “That’s so great, because when you do that, the muscles that are constantly being used with one sport are getting a break.”

Houston Texans defensive end J.J. Watt voiced his opinion about the increase of specialization among young athletes on Twitter in 2017.

Multi-sport athletes are also more likely to have long-term athletic success. Seventy-one percent of Division I football players were multi-sport athletes growing up, a 2017 NCAA survey reported. And seven out of 10 Olympic athletes surveyed by the United States Olympic Committee said they grew up playing more than one sport.

U.S. Youth Soccer director Sam Snow said in an interview with the organization that multi-sport athletes are an asset to teams.

“If you talk to college coaches today, they’ll all tell you—whether it’s a soccer coach, football coach, basketball coach—they’ll all say, ‘we want multiple sport athletes because those are the ones who perform best at the intercollegiate level,’” Snow said.