The Black and White • January 14, 2019 • https://theblackandwhite.net/62608/news/ap-exam-registration-pushed-forward-to-late-october/ 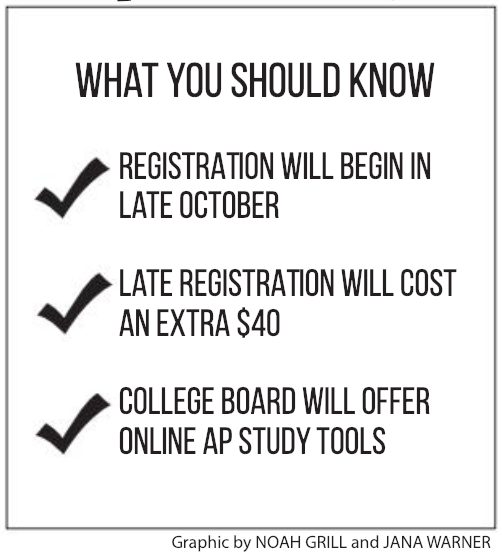 Starting next year, students will register for Advanced Placement exams beginning in late October and continuing to mid-November, instead of in March. Registration after the deadline will cost an extra $40.

The College Board decided to move up the registration date after last year’s pilot program involving over 40,000 students nationwide. The Board saw increased registration among underrepresented minorities and low-income students in the pilot program. The number of underrepresented and low-income students taking AP tests both rose, as did passing scores. Board officials attributed the increases to students commiting to taking the exams early on in the school year.

Many teachers welcome the change, echoing the Board’s hopes that it will encourage more students to invest themselves in taking AP exams in May early on in the year.

“By having students register in the fall, it will keep people from deciding at the end to not take the exam,” social studies teacher Andrew Sonnabend said. “I think that will definitely help the numbers go up.”

But AP coordinator William Kapner is angry that the new registration deadline will conflict with college recommendation deadlines, he said. Many coordinators have expressed their concerns to MCPS because of the conflict, Kapner said.

“They think we can organize the AP exam process by November, which is absolutely insane,” Kapner said. “It’s counterproductive to a school that has a strong AP program. I’m not the only AP coordinator at our school, but I had to write 55 college recommendations before November 1st. It’s not possible.”

Some students who self-study for AP exams are skeptical of the move. Junior Bobby Xiao said he doesn’t want to have his parents pay in the fall for exams he might not even take in May.

“For me, there are some classes I would prefer to self-study for, and registering in the fall would be too early for me,” Xiao said. “By spring, I’ve had more time to consider, and AP exams are pretty expensive, so more time would actually help. If they move the deadline, a lot of people won’t have decided on what they want to take, so it would be a little chaotic.”

The Board also plans to add online tools and resources for teachers and students. Teachers are encouraged to make an online classroom for their students on the AP website, allowing students to access AP question banks.

Students will be able to filter the questions by topic or type, allowing them to easily find practice questions on a specific topic. Xiao said he’s looking forward to using the service.

“Last year, I was trying to study a specific type of AP Statistics question,” Xiao said. “It took me an hour to find all the questions relevant to that topic in a released multiple choice section. I think that if College Board organized that for you, you would be a lot more prepared and organized for the exam.”