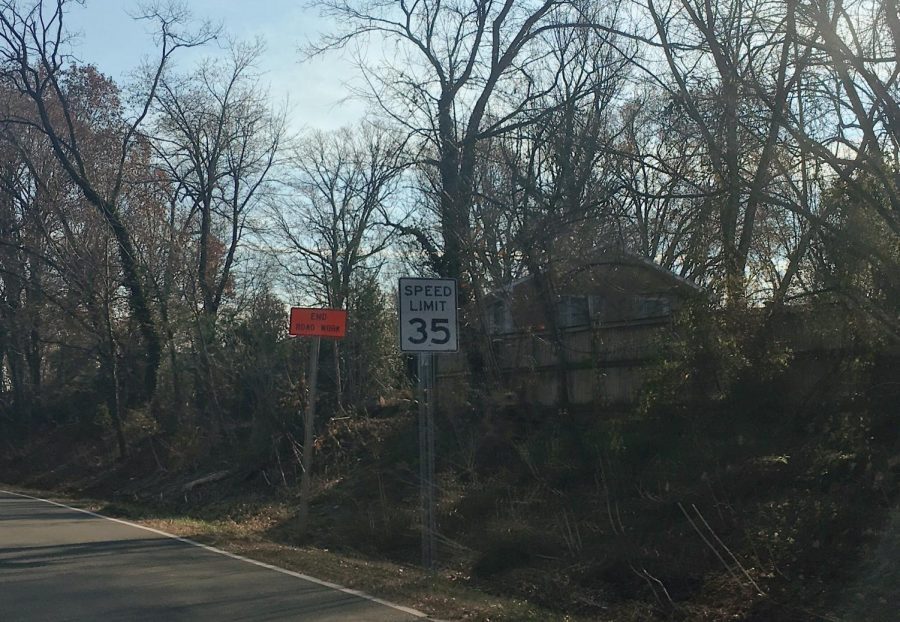 The speed limit on the segment of River Road extending from the Beltway to just west of Springfield drive has been reduced from 45 mph to 35 mph. Photo by Rohit Gude.

Some students are frustrated after the State Highway Association changed the speed limit on a three-mile segment of River Road that includes the Braeburn Parkway intersection and Pyle Road crosswalk behind Whitman from 45 mph to 35 mph.

The SHA reduced the speed limit after decades-long advocacy from community members for a safer Braeburn intersection and Pyle Road crosswalk, former Whitman parent Robert Boltuck said. The two locations—located at the back entrance to Whitman—have been the site of several serious accidents, including a crash involving a Whitman family in February 2016.

Since that crash, community members have intensified their push for better safety measures, holding three meetings over the past two and a half years with locally elected leaders to discuss proposals, Boltuck said.

Boltuck polled over 1,400 residents earlier this year to gather a community consensus on potential changes to the intersection and crosswalk. The poll indicated that over 80 percent of residents would support a speed limit decrease near the Braeburn intersection in the interest of safety.

After the SHA met with Boltuck, former Whitman principal Alan Goodwin and other community leaders, they developed two proposals: reduce the speed limit to 35 mph or install a traffic light at Braeburn to control left-hand turns into Whitman. There are currently bollards—posts which protect pedestrians in areas of heavy traffic—at the intersection to guide cars across River Road in both directions.

After evaluating speed limits north and south of the segment, the SHA decided to lower the speed limit to make it consistent with the entire stretch, SHA official Charlie Gischlar said.

“This roadway has a lot of unique characteristics, and the speed limit reduction approach is a key factor in keeping a consistent speed limit throughout the remainder of the corridor,” Gischlar said. “This is also inline with SHA’s initiative to make adjustments for increased pedestrian safety when possible.”

“The higher speed limit allowed for more ease of movement,” junior Brody Loghman said. “Although this lower speed limit made things more safe, it has made basic travel along River Road more of a hassle just to get to from point A to point B.”

Community members will further discuss adding a left turn signal and crosswalk improvements Jan. 15 at Pyle Middle School, when the SHA is sponsoring another community meeting.

“It’s very important and critical that community members attend the meeting,” Boltuck said. “It’ll be an opportunity to have their questions answered by SHA representatives and engineers about site details.”

Boltuck predicts that as long as the SHA sticks to their commitment to making the stretch of River Road safer and respects the community’s decision, the other two changes should be completed during the 2019-20 school year.

This story is an updated version of a previous story on the speed limit change. To view the first story posted, click here.