Addition to be completed by Aug. 2021 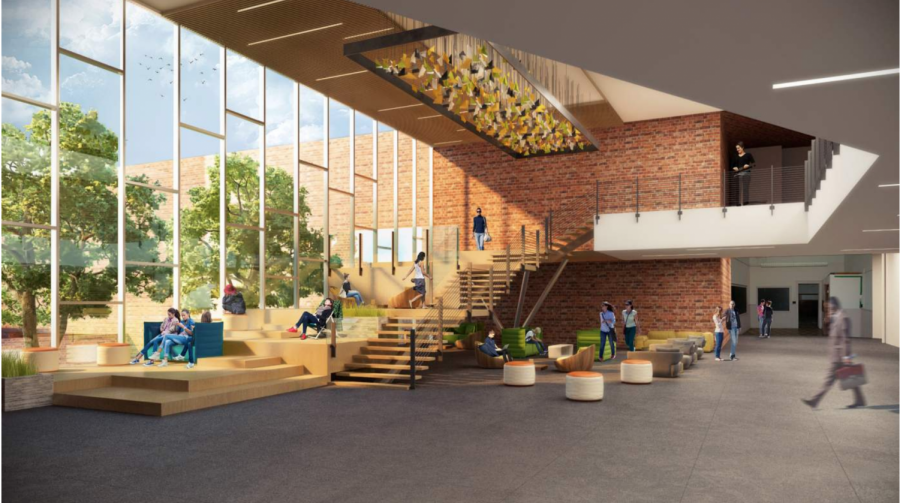 A digital rendering illustrates what the common area will look like when Whitman's renovation is completed in 2021. The completed addition will include a three-story building to replace Whittier Woods, an auxiliary gymnasium and a common area to link the main building to the new wing.

A three-story building to replace Whittier Woods, an auxiliary gymnasium, and a commons area to link the main building with the new wing will be added to the Whitman campus by August 2021. County managers and the RRMM Lukmire Architects announced the final plan at a Nov. 5 public work session. The renovation is scheduled to begin in December of this year.

In June, at least eight portables will be installed in the parking lot. This means there will be about 50 fewer parking spots available to students, assistant principal Rainer Kulenkampff said. The portables will most likely be located in the last row of the parking lot, closest to the auditorium and Whittier Boulevard.

The addition was originally intended to address overcrowding.

“Whitman and our feeder schools in the area have increasingly grown with the number of students,” principal Robert Dodd said. “It was important for Whitman to have more instructional space to serve what has been a growing population.”

The building that will replace Whittier Woods will have around thirty classrooms. The precise number of classrooms won’t be finalized until the design is presented to the Board of Education in January 2019.

The common area will be used as a workspace for the drama, music and art departments to use, Legg said. It will include a student dining area. The possibility of a gallery and performance space will be determined during the next phase of the design, project manager Shiho Shibasaki said.

“The location of the commons really created a central node for the addition and the existing school,” Legg said. “It’s going to be a shared amenity that brings the two parts of the school together.”

Students are excited for the commons space because it’s one part of the addition that’s specifically meant for them, freshman Victoria Steinitz said.

“The commons space seems very cool,” Steinitz said. “Being able to hang out with your friends between classes or after school in such a large area and have lunch there would be really fun.”

The auxiliary gym will be located near the existing gym, Legg said, and is designed as a dance studio to fulfill a MCPS requirement to accommodate a dance studio. It will mostly be used by gym classes, but will offer an open space for Whitman Drama, principal Robert Dodd said.

Once construction begins, all science classrooms will be relocated to the third floor in the main building. This will make sharing lab equipment easier, and allow students to easily find teachers who share classrooms with other teachers, science teacher Anne Marie O’Donoghue said.

Some science teachers in this wing, like Sherri Gingrich, are unhappy with the renovation because it means demolishing a wing that has been renovated before.Within the last 20 years, the remodeling costs of her classroom have totaled hundreds of thousands of dollars. She said she doesn’t see any reason she should have to leave.

“As a taxpayer whose money goes towards these types of projects, and as a teacher, there is nothing wrong with the room,” Gingrich said.

The addition will unite both Whittier Woods and the main school, creating a more unified look for the future.

“The focus of the addition is to make the transition from Whitman right now to the new space one and the same,” Dodd said. “Right now, we feel like that artery gets clogged from traveling from one space to another, but that will be relieved and it will feel like one school once the addition is complete.”