The Black and White • January 14, 2019 • https://theblackandwhite.net/62508/news/whitman-earns-only-average-marks-on-msde-school-report-card/ 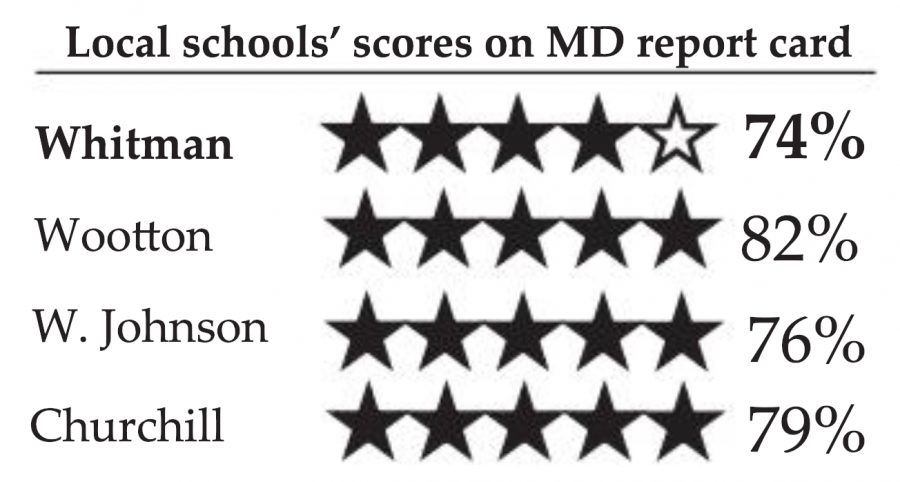 By Anna Yuan and Zara Ali

Whitman earned a 74 percent—equating to four out of five stars—on a report card the Maryland State Department of Education released Dec. 4. The state report card is an annual measure of school performance.

The school earned a C grade after students underperformed on the 2016 English PARCC; low attendance rates were also a factor. Other nearby schools earned higher grades: Winston Churchill scored a 79 percent, Thomas Wootton scored an 82 percent and Walter Johnson scored a 76 percent. All earned five stars; Whitman missed the five-star cutoff by 1 percent.

Whitman scored high in three sections but underperformed in Academic Achievement and attendance—a factor in determining points for the School Quality and Student Success category. The results are based on 2016 PARCC results and 2017 attendance figures.

Whitman students’ low passing rate on the 2016 English PARCC was the main contributor to the low ranking. Only 26 percent of students earned a proficient rating on the English test, compared to 81 percent who were rated proficient on the math PARCC.

The 2016 PARCC wasn’t a graduation requirement for Maryland students because it was a trial year, so many students didn’t put in effort.

“Students sat for the PARCC under the direction that it would be a practice,” said Ryan Derenberger, who was the 10th grade English team leader in 2016. “Everything would look and feel official, they would have to work through the sections, the proctors would have to take everything seriously—but students were well aware of the fact that it was not required for graduation.”

Jenan El-Hifnawi (‘18) said if students knew there would be consequenecs, they would have tried harder.

“The general consensus in the school about the PARCC test was that nothing would be affected,” El-Hifnawi said. “Everyone thought it was for no reason and it became a joke.”

Attendance also stood out on the report card, Dodd said.

To calculate attendance rates, the MSDE combined the number of unexcused and excused absences, inflating MCPS’ total absences compared to other Maryland counties. Attendance policy in Montgomery County differs from Howard County, where only three days of discretionary excused absences are allowed. The rest are considered unexcused.

“The state analysis is pretty difficult for schools because we actually excuse a fair number of things like college visits,” MCPS spokesperson Derek Turner said.

The report card indicated that approximately one fifth of Whitman students were chronically absent, or missing class at least 18 days in a school year.

“Attendance is a problem,” attendance secretary Tabitha Davis said. “If students and parents understand that there are rules to follow, since this is a public school, we wouldn’t have such a low attendance because people would be held accountable for their actions when they want to skip school whenever they feel like it. Hundreds of kids are involved in this.”

The low rankings are unlikely to have a major effect on how colleges view the school, said Kelly Fraser, a college counselor from Green Apple College Guidance & Education.

“Colleges have a long standing relationship with Whitman and they work hard to understand all high schools,” Fraser said. “It’s just one part of a more complex equation.”

Junior Alicia Lauwers said the report doesn’t accurately represent Whitman, since it was mainly based on one set of data.

“I’m pretty surprised that it would be so low at 74 percent because Whitman’s a great school,” Lauwers said.

In 2017, PARCC scores were significantly higher, with 91 percent of students passing. MCPS is conducting an analysis and accountability study for every school. The study will examine PARCC scores, SAT data, district assessments, quarterly assessments and classroom grades; results will be released in January 2019.