The Black and White • January 22, 2019 • https://theblackandwhite.net/62485/feature/intimate-real-and-relatable-h-e-r-releases-fifth-album/ 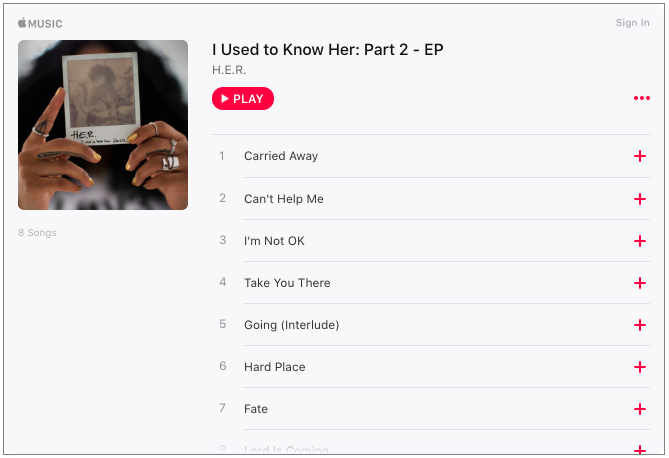 After releasing I Used to Know Her: The Prelude Aug. 3, Gabi Wilson, better known as H.E.R., recently released a conclusion EP: I Used to Know Her: Part 2 Nov. 2. The new EP consists of eight tracks and differs in musical style from her prior work. While the August EP featured faster beats and a more hip-hop vibe, her new EP focuses completely on R&B melodies.

Wilson released her first ever EP in 2016, and people instantly fell in love with her music. It’s intimate, real and relatable: three elements that often get lost in today’s pop culture. She also receives praise for her anonymity, as both her face and name don’t appear on any of her EP covers. By taking attention away from herself, she keeps her music authentic and emotional, and she focuses on the meaning rather than the person writing them.

In her new EP, she sings about prevalent topics in society. In her song “I’m Not OK,” she sings about holding onto a relationship that’s clearly unhealthy. In her closing track, “Lord Is Coming,” she addresses drug abuse and mental health battles. She rhythmically raps the song like a spoken word poem, saying “I never read the news anymore, it’s hard not to feel hopeless / When no one noticed, the explosion came from a man who’s legal gun was loaded.” Raw lyrics like these are the reason H.E.R. is a growing sensation; she has talent in both writing and singing, a rare combination among today’s artists. Listeners relate to her and the emotions she’s experienced, and her stories serve as an outlet for her fans’ own struggles.

Though H.E.R. shows talent and vulnerability throughout I Used to Know Her: Part 2, the slow beats and lack of featured artists resulted in little success on the charts. But her true fans have embraced the music, because they know artists like H.E.R. are hard to come across.