The Black and White • January 18, 2019 • https://theblackandwhite.net/62439/news/maryland-state-highway-administration-hosts-community-meeting-jan-15/ 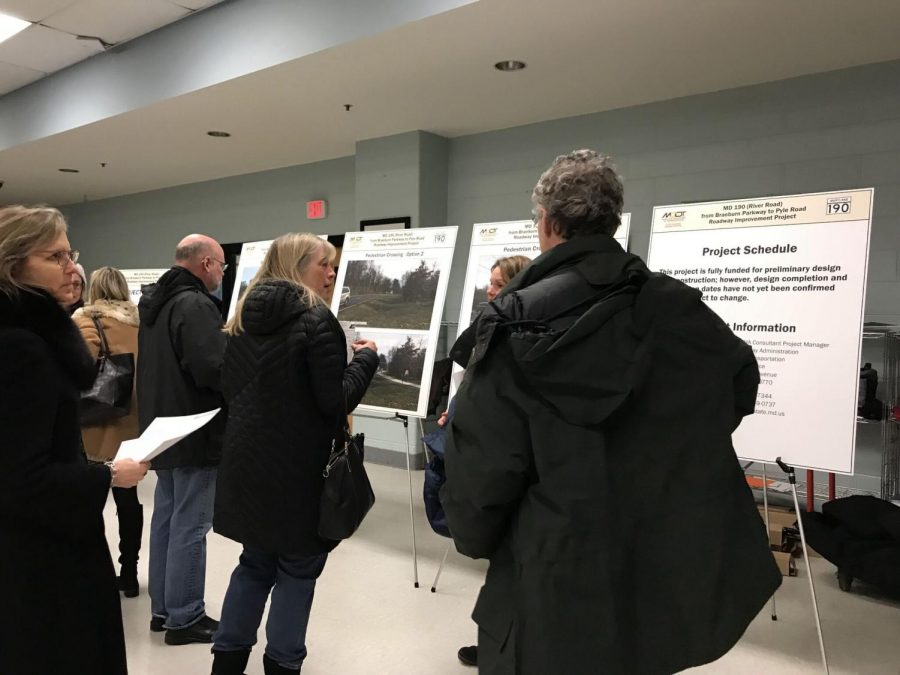 Community members discuss SHA proposals at a community meeting on Jan. 15 in the Pyle middle school cafeteria. An option will be decided on in the coming months and construction plans will be finalized at the end of the year. Photo by Anna Yuan.

Representatives from the Maryland State Highway Administration finalized an improvement plan for the intersection of Braeburn Parkway and River Road and unveiled several new improvement possibilities for the Pyle Road crosswalk in a community meeting Jan. 15. Residents from surrounding neighborhoods attended the meeting in the Pyle Middle School cafeteria and submitted their opinions in writing after seeing the proposed options.

In December, the SHA lowered the speed limit from 45 to 35 mph on a three-mile segment of River Road that includes the Braeburn intersection.

At the meeting, the SHA displayed a plan to install traffic lights and concrete islands at the Braeburn intersection. This was finalized by the SHA after it received positive feedback during a meeting held by the Bannockburn Civic Association in April last year, SHA district community liaison Christopher Bishop said.

Some community members were frustrated that they didn’t have a chance to voice their opinions on the traffic light before it was finalized.

“They’ve already decided pretty much to put in a traffic light that wasn’t up for discussion, so it’s kind of disappointing,” Whitman parent Steve Hackett said.

The two new proposals deal with the Pyle Road crosswalk. Both options involve the installation of traffic lights and a push-to-walk button for the crosswalk across eastbound River Road. The first option has a new path going straight to Pyle Road. The second option features a path going towards the Whitman baseball field and the installation of traffic lights and a hazard identification beacon on westbound River Road.

Residents were split but many agreed that the second option was safer for students walking to Whitman.

“I definitely prefer the second location,” former Whitman parent Susan Wexler said. “The sightlines at the top of the hill are much better for drivers, whereas at the current location, there’s very little time for a driver who comes very quickly over the hill to react to someone who might not be crossing as quickly as necessary.”

SHA engineers will make their decision on which option to construct based on the input they received from the community and will decide on a construction start time later this year, Bishop said.