The Black and White • January 21, 2019 • https://theblackandwhite.net/62409/news/furlough-frenzy-government-shutdown-impacts-whitman-community/ 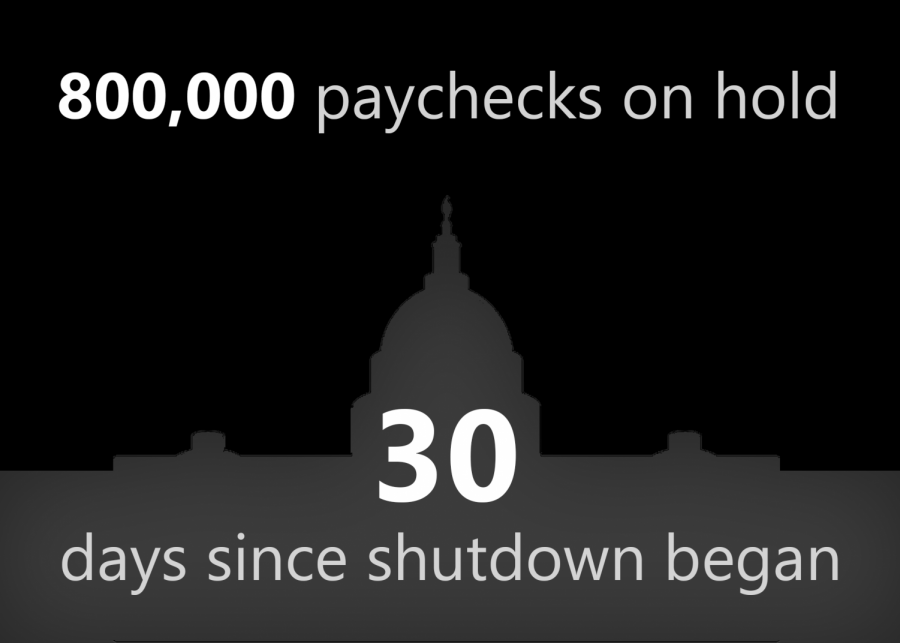 The current government shutdown—now in its 30th day—is the longest in U.S history. The shutdown has kept around 800,000 federal employees from receiving pay, including many parents in the Whitman community.

In an informal survey of five classes, twelve students said at least one of their parents was furloughed.

Whitman parent Rika Brent works in the State Department, where she teaches Japanese to U.S. diplomats. Since the shutdown began, she’s tried to make the most out of her time off by spending it with family, while also keeping in contact with colleagues and continuously following the news to stay updated on the situation.

“Obviously, it’s frustrating, and we don’t know what’s going to happen or how long it’s going to take,” Brent said. “The last paycheck came in on Jan. 3rd, and I don’t know when the next one will come in. That’s pretty scary.”

Junior Jenna Omar has found it difficult to keep contact with her mother, Soumaya Tohamy, an economist working for the Department of Agriculture. Her mother’s only phone is federally funded, and she’s not allowed to use it during the shutdown.

“Yesterday she was trying to pick me up from school because I have to stay late for robotics,” Omar said. “I didn’t know that she had left. Robotics ended early and I didn’t know where she was, so I was just walking around the school looking for her.”

History teacher Andrew Sonnabend has stopped shaving in solidarity with his friends who haven’t been able to work since the shutdown began.

“One of my friends just mentioned that he wasn’t going to shave until the shutdown was over, and I said I’m right there with you,” Sonnabend said. “I’ll look like Coach Floyd if I have to.”

With the Democratic House and President Trump unable to compromise on the funding for a border wall, there are no signs that an end to the shutdown will happen anytime soon. Most recently, Trump walked out of a meeting with Speaker of the House Pelosi and Senator Schumer regarding the government shutdown, calling it a “waste of time” according to CNN.

“I just hope they will come to some sort of agreement so, not just me, but so many people who are affected can get back to their lives,” Brent said.