The Black and White • January 14, 2019 • https://theblackandwhite.net/62384/sports/tennis-track-lacrosse-and-field-hockey/

Four-sport athlete Hanna Freund does it all 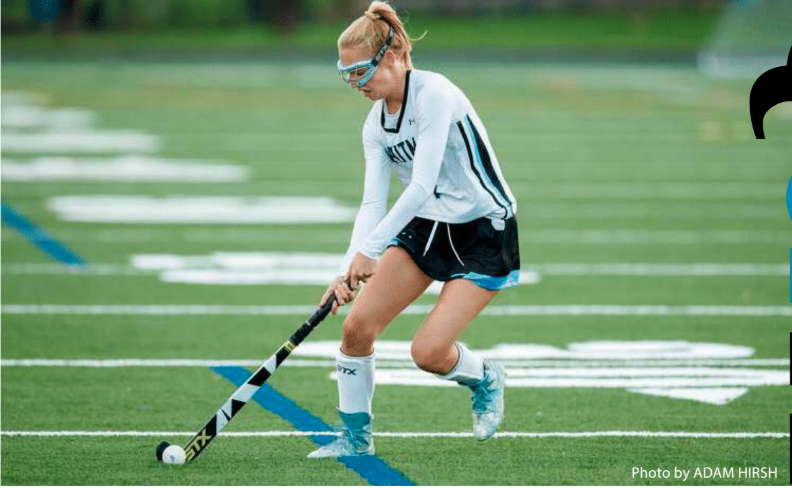 Senior Hanna Freund dribbles down the field for the field hockey team—her fourth varsity Whitman sport. She joined this year after tennis was moved to the spring.

Senior Hanna Freund doesn’t have an offseason—and that’s just how she likes it. She’s played tennis in the fall for the past two years and spent every winter since freshman year running indoor track. For the past three spring seasons, Freund has played varsity lacrosse. This year, after tennis was moved to the spring, Freund was left with an empty fall season, so she added yet another varsity sport to her impressive athletic career: field hockey.

Just a month before field hockey tryouts, Freund didn’t know the rules of the game or even how to properly hit the ball, but that didn’t stop her from making the varsity team in August.

For Freund, athletics has been the most important part of her high school experience, she said. Her teammates say her natural athleticism has allowed her to pick up any sport with ease.

The Black & White: What was it like playing field hockey for the first time?

Hanna Freund: It’s pretty similar to a bunch of sports, so it’s not that hard to pick up. I only practiced for an hour with my friend before tryouts. The rules are kind of difficult at first, but eventually, you get the hang of it.

There are three different types of hits in field hockey, and my friends taught me those; that’s really all you need to know as a beginner. I have enough athleticism to just pick it up.

I also don’t get intimidated with people who are better. I knew there were people better than me, so I used them as motivation. When I would get past one of the really good players, I would think, ‘nice.’ I was really happy. My goal was to beat a really good player and score on the goalie.

B&W: Do you ever want a break from sports?

HF: I can honestly say that I like always having a sport—that’s why I decided to do field hockey. I like always being active, and even when we have a rainy day and practice is canceled, I’ll still go to the gym or run. I look forward to all the games and hanging out at all the team events with my teammates. Especially for lacrosse and tennis, that was a huge part.

B&W: What made you decide to pick up another sport in the fall of your senior year instead of focusing on college applications?

HF: Personally, I didn’t really think that much about college applications—it’s just not that stressful for me. I feel like I couldn’t sit down and do homework for hours as soon as I get home, so I definitely like the break to do some physical activity in between.

B&W: How has playing sports your entire life has impacted you?

HF: It’s definitely made me a better team player, taught me a lot of time management and taught me to stay active. Not being active is weird for me. I always want to be doing something. When I’m sitting on the sidelines for field hockey, I just want to run. I play every second in lacrosse, and tennis was the same, so it’s weird not playing something.