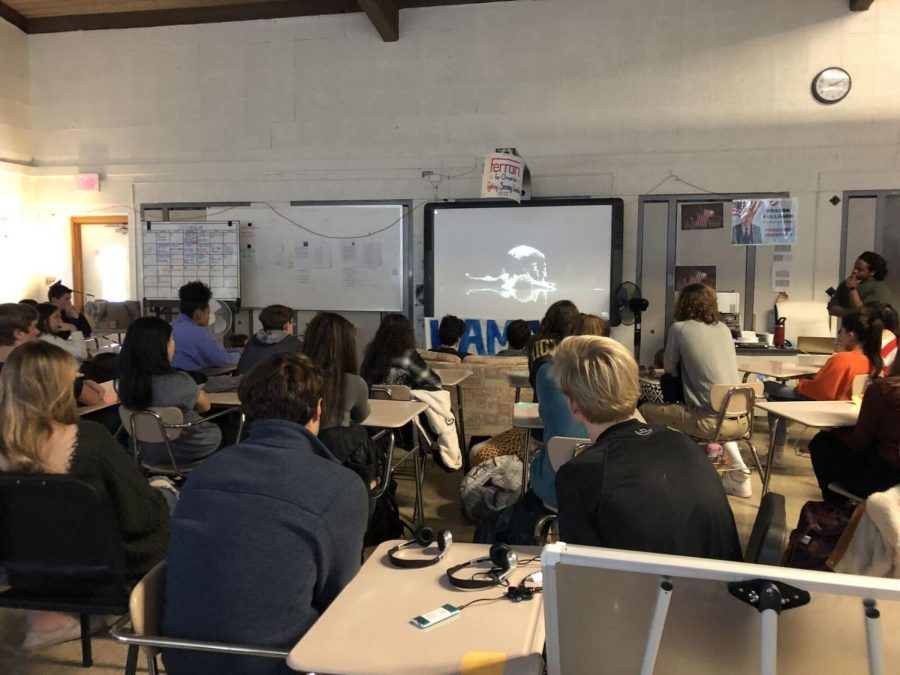 Senior Alex Lewis taught students how hip-hop artists express disenfranchisement, frustration, identity and empowerment through their music in his interactive project for his Media in Society class Dec. 19. Lewis received a $1,100 grant from Whitman’s Education Foundation to fund the project, which included a gallery walk and short talk.

Lewis set up fifteen stations around the classroom with MP3 players connected to headphones, each playing different hip-hop songs. The stations also included printed song lyrics, disclaimers warning students about sensitive topics and explanations of the meaning behind each song. Lewis selected the songs “America” by Logic, “Black or White” by Michael Jackson, “Riot” by Childish Gambino and “Respect” by Aretha Franklin, among others. After the gallery walk, Media in Society teacher Omari James and Lewis played rapper Meek Mill’s “Stay Woke” performance video, which addresses issues that affect many in the African-American community like mass incarceration, gun violence and drug addiction.

Lewis got the idea in October after James played a podcast in class about poverty in Chicago’s South Side neighborhood. The podcast reminded Lewis of how hip-hop music sheds light on poor conditions in impoverished areas, which often go overlooked.

“In class, we were listening to a podcast about the poorer areas in Chicago, and I was surprised of how many people didn’t know what was going on there,” Lewis said. “Throughout the whole thing I had a couple of songs by Chance the Rapper in my head about how awful the conditions are.”

After Lewis approached James with the idea, James suggested the gallery walk. To turn his idea into reality, Lewis needed funding, so James pitched the idea to principal Robert Dodd. Dodd loved the proposal and immediately referred them to the Whitman Education Foundation, which gave Lewis the grant to buy MP3 players and songs.

Music has played a large role in Lewis’ life since his dad, who loved music, passed away four years ago. Like his dad, Lewis said he enjoys listening to the meaning behind lyrics, which helped him come up with the idea for his project.

“My father was obsessed with music,” Lewis said. “He created a whole stereo room in our basement with thousands of records and CDs and the craziest speakers imaginable.”

For suggestions about which songs to include, Lewis hung posters on the classroom walls for students to write on. James could tell that students were engaged with the project because many of them left song recommendations, he said.

James plans to continue this project next year but aims to reach more students because he felt the presentation was impactful. Many students in his class had emotional reactions.

“They’ve been inspired,” James said. “There’ve been a few kids who started crying because the content reminded them of experiences they’ve had. We all to some extent know that these issues exist, but when faced with specific lyrics and sentiments about the details of disenfranchisement, it can be overwhelming for us.”

Senior Emma Neuffer said the project made her more aware of the significance of hip-hop music.

“This really opened my eyes,” Neuffer said. “I’ve always been really into music, but rap and hip-hop never really connected with me. Taking the time to listen to this type of music in this context showed me how this form of music is really impactful to a lot of people.”