The Black and White • January 4, 2019 • https://theblackandwhite.net/62276/feature/little-mix-falls-flat-with-latest-album/ 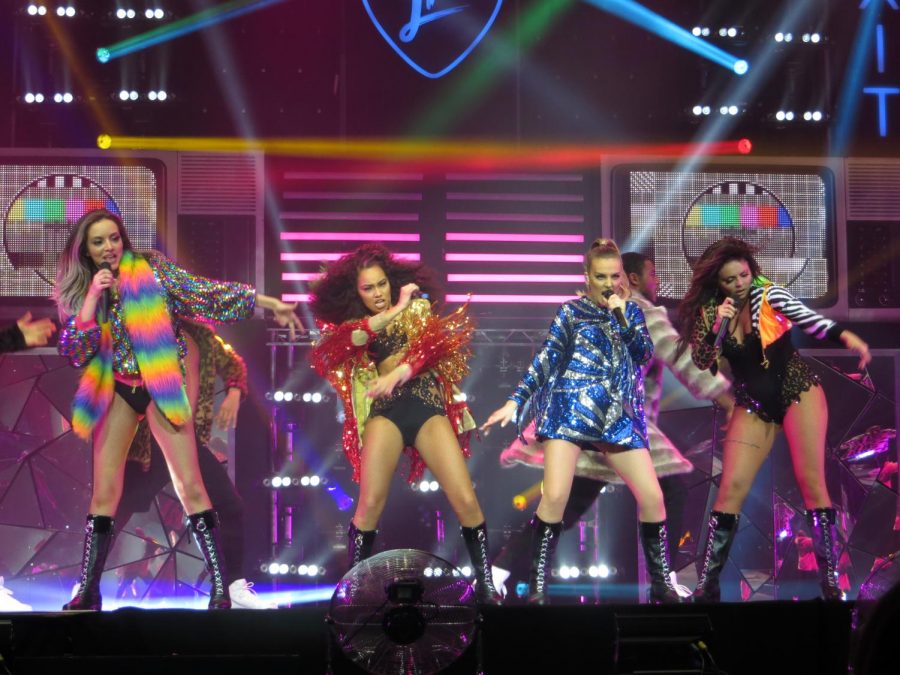 Little Mix performs on stage. Although the group's latest album has an empowering message, the songs' lyrics feel cliche.

First seen on The X Factor, the British girl group Little Mix released their fifth studio album, LM5, Nov. 16. The album consists of 18 tracks and a video, featuring artists Nicki Minaj and Cheat Codes, and debuted at number six on the iTunes chart.

Despite the high ranking, the album was far from impressive. Many of the tracks sound forced and cliché. The album opens with “The National Manthem,” where each member of Little Mix harmonizes for about 30 seconds as they sing “She is a bad b***h / Made up of magic / Pray to the goddess / Don’t break your promise / Thou shall be faithful and honest.” The combination of a cappella, proper language and curse words makes it uncomfortable to listen to.

The second track, “Woman Like Me” featuring Nicki Minaj, is somewhat redeeming. The tune is peppy and fun, and the collaboration provides a refreshing change from the normal sound of Little Mix. It was released prior to the album and debuted at number five on the iTunes chart following promotion from both Minaj and Little Mix.

But as the album unfolds, it disappoints once more. “Joan of Arc,” with its opening line, “One foot in the club, everybody watch me / One pop of the booty, everybody love me,” is plain cringey. The song aims to promote self-love, but the unimaginative lyrics, squeaky tone of voice and dull beat make it not worth a listen.

The album ends on a high note with its closing track, “Only You” featuring Cheat Codes. The collaboration with the DJ adds spunk to the song, as the beat builds up and ends with a fun drop.

But ultimately, these few reviving songs don’t make up for the unskillful tracks that plague the album as a whole. As a group of five women, they aim to promote feminism, which is what the album is focused on. As much as I love women supporting one another, it may be time for Little Mix to retire.