The Black and White • December 20, 2018 • https://theblackandwhite.net/62150/news/federal-judges-order-redistricting-of-6th-district-md-ag-appeals/ 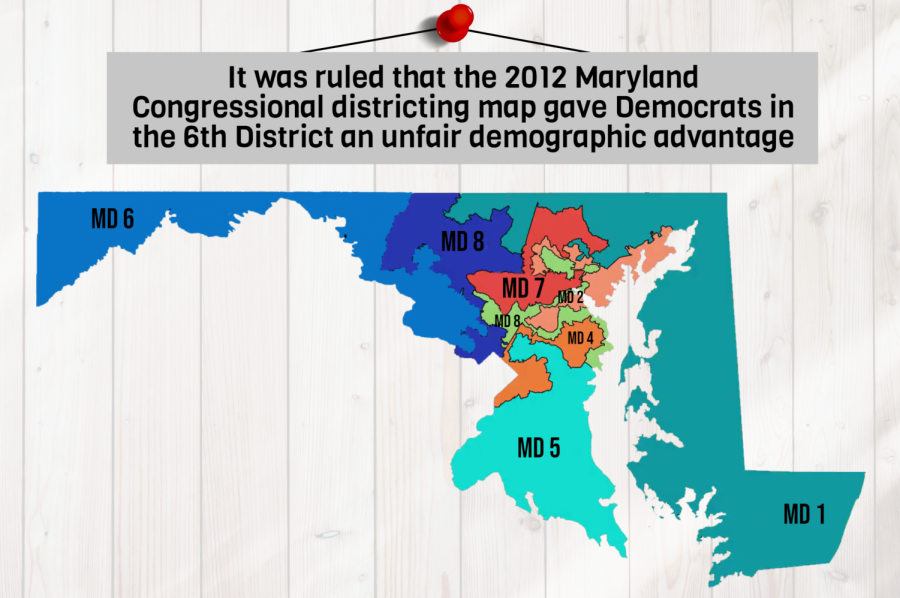 A panel of three federal judges ruled Nov. 7 that the 2012 Maryland Congressional districting map gave Democrats in the 6th District an unfair advantage in the 2018 midterms. Under the judges’ ruling, Maryland lawmakers must propose new boundaries in time for the 2020 elections.

A panel of three federal judges ruled Nov. 7 that the 2012 Maryland Congressional districting map gave Democrats in the 6th District an unfair demographic advantage in the 2018 midterms, after seven Republican constituents sued the state. In the election, Democratic Congressman-elect David Trone defeated Republican candidate Amie Hoeber by over 20 points, according to the Maryland State Board of Elections.

Under the judges’ ruling, Maryland lawmakers must propose new boundaries for the 6th Congressional District by March 7, 2019, in time for the 2020 elections. State lawmakers drew the current map now deemed unconstitutional in 2010 after the U.S. Census apportioned eight Maryland Congressional districts.

Maryland Attorney General Brian Frosh, a Democrat, appealed the ruling Nov. 15, hoping to bring the case directly to the Supreme Court. Attorneys from Frosh’s office wrote in the motion that the Supreme Court’s acceptance of the case for its next docket would clarify Maryland Congressional redistricting for the future.

“Any further guidance from the Supreme Court will be important to ensure that, even if this Court’s order is affirmed, state lawmakers do not redraw Maryland’s electoral map for 2020 using a standard that is not the one ultimately adopted by the Supreme Court,” Frosh’s office wrote.

Despite the appeal, Gov. Larry Hogan signed an executive order Nov. 26 establishing a nine-person commission—composed of three Democratic, three Republican and three unaffiliated members—to redraw the boundaries. In a Nov. 26 State House news conference, along with announcing the commission, Hogan criticized Frosh for his appeal.

“Actions like these are exactly why Marylanders are fed up with politics as usual,” Hogan said in the conference.

The group of seven Republican constituents, who were no longer able to vote in the 6th District because of the changes, originally filed suit against the state in 2013. Michael Kimberly, a partner at Mayer Brown Law Firm, represents the Republican plaintiffs.

Kimberly is excited with the recent unanimous decision deeming the districts unfair, and he welcomes the chance to cement the ruling in nationwide policymaking, he said. If the Supreme Court ruled on the issue, it would provide directions to every state on redistricting.

“If the Supreme Court puts the case on its argument calendar, we’ll be prepared to argue in favor of our theory both as it applies to Maryland and how the rest of the country and political leaders in each state should think when creating new districts,” Kimberly said.

In June, a Federal court ruled against a Virginia gerrymander case, which was appealed to the Supreme Court and is on the docket for this session. In Wisconsin, a group of Democratic voters also brought suit against the state, arguing that the Congressional map was drawn unfairly to give Republicans an advantage. The Supreme Court chose not to rule on the on the issue, and instead sent it back to the district court to determine if the plaintiffs have standing to bring suit.

“I think [the Maryland ruling] is a great victory,” Kimberly said. “What we see around the country is federal courts willing to step in and stop lawmakers from attempting to manipulate election outcomes. This is now, in the course of three years, the third unanimous decision invalidating a partisan gerrymander. It’s an indication that the courts understand that the situation is really untenable and out of hand, and they’re ready to do something about it.”

A 2009 George Washington University report found that voter abstention rates increase by eight percent in districts that were redrawn into new incumbents’ districts. Since many voters have new representatives, voters are usually less willing to vote because the candidates are unfamiliar or unknown, NSL teacher Katherine Young said.

“Beyond hurting voter efficacy, I think [gerrymandering] is a pretty negative part of our democracy that in some ways is almost like suppressing votes,” Young said. “It’s suppressing votes in part because people in districts that are heavily Democrat or heavily Republican feel very helpless a lot of the time and are less likely to go out and vote.”

Although judges ruled that the district was unfairly drawn, contested seats in the 6th District remain competitive. Before Trone, Democratic Congressman John Delaney’s win in 2012 made him the first Democrat to hold office since 1990. Delaney won re-election in 2014 and 2016, but was close to losing his re-election in 2014 to a Republican challenger.

“In the 2014 elections, Delaney won by a razor-thin margin, so the voters in the 6th District are still deciding who they want to represent them in the U.S. House of Representatives,” State Delegate Marc Korman said. “But it’s important to remember that the courts make the ultimate decision and, as lawmakers, our responsibility is to make sure that we do the best job we can to follow their directives.”