The Black and White • December 17, 2018 • https://theblackandwhite.net/62070/feature/the-invisible-illness-pots-takes-a-toll-on-students-academic-social-lives/ 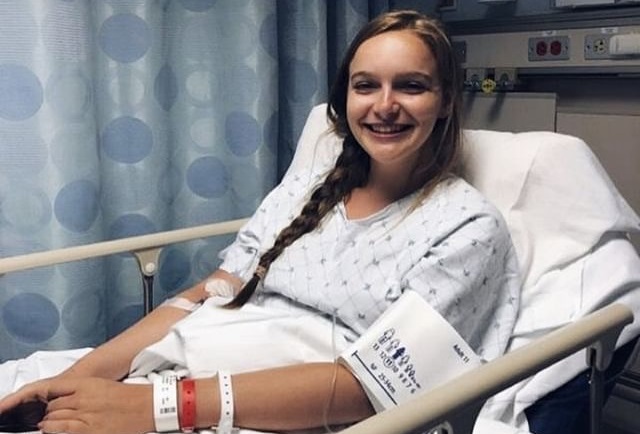 Junior Caroline Muir smiles before an endosscopy and a liver biopsy at Georgetown University Hospital this summer. Muir has POTS, and has had several procedures to manage her symptoms.

In seventh grade, junior Caroline Muir said she began feeling a “constant, dull ache” in her stomach. Doctor after doctor told her the symptoms were nothing to worry about. Some even accused her of having “middle child syndrome,” suggesting she was making up her pain to get attention. But her pain, she said, kept getting worse.

“I went from being a straight A student who played soccer and volleyball to someone who was completely debilitated—who couldn’t even stand up on her own,” Muir said. “Going from a healthy person to someone who had their health completely robbed from them out of the blue was heartbreaking.”

So when Muir was diagnosed with Postural Orthostatic Tachycardia Syndrome, a relatively common disorder of the autonomic nervous system estimated to impact one in every 100 teenagers, halfway through seventh grade, she said she was nervous for the future but also relieved to finally receive a diagnosis. For many POTS patients, like Ellie Trainor (‘18) and junior Jackie Aronie, Muir’s experience is familiar: a protracted search for a diagnosis, a sigh of relief when diagnosed and grueling lifestyle adjustments to manage symptoms.

POTS symptoms include an abnormally fast heart rate, dizziness, shortness of breath and digestive issues. The syndrome affects mostly females ages 15 to 50. Eighty percent of patients diagnosed in their teens grow out of their symptoms by their mid-20s. Despite affecting roughly 1 to 3 million Americans, POTS often takes years to diagnose—if it’s correctly diagnosed at all. Since symptoms are non-specific, patients and physicians often attribute common indicators of POTS to stress or dehydration or dismiss them altogether.

“It was a huge relief to me, even to just be able to put a name on it,” Trainor said. “Once I started doing the treatment and feeling better, it felt like a miracle.”

Aronie was diagnosed with a mild case of POTS at the end of eighth grade. Though she said her symptoms aren’t severe, she still notices dizziness and spotty vision, as well as blood rushing to her legs when she stands up.

“If you press on your leg—your legs are red obviously, because all the blood goes down—the spot just turns white,” Aronie said. “It’s weird to look at your legs and be like, ‘oh my god, I’m polka-dotted.’”

POTS has no definitive cure, so patients that don’t grow out of the syndrome manage symptoms their entire lives. For patients with severe cases, dealing with POTS requires major lifestyle adjustments, such as extensive dietary restrictions or, in Muir’s case, taking few honors and AP classes. And sometimes, adjustments simply don’t work.

“We require more energy than a healthy person when performing the easiest tasks,” said POTS patient Irina Balan, who is also on the Dysautonomia International patient advisory board. “People have a hard time understanding how we can be okay one minute and completely miserable the next.”

For Muir, POTS isn’t just physically draining, it’s also emotionally taxing. When she was first diagnosed, she wasn’t used to missing out on “all the normal things teenagers do,” and adjusting to her new lifestyle was difficult.

In high school, Trainor would often cancel plans and instead lie on her bedroom floor, nauseous. Now a freshman at New York University, walking to class can make her lightheaded, but the chaos of college life means her suffering often goes unnoticed. Even though POTS patients usually appear healthy, there are days when Trainor can barely get out of bed without fainting.

“It’s like an invisible disability,” Trainor said. “It’s sort of a crapshoot every day how bad it’s going to be.”

“It’s sort of like you have a word on the tip of your tongue, but you can’t think of it—but with everything,” Trainor said.

One of the underlying causes of POTS is overactivity of nerves that signal the heart to beat fast. In POTS patients, blood vessels are too relaxed, so blood flows downward quickly, and the heart can’t compensate. Because blood can’t properly circulate, patients faint or feel dizzy.

Cardiologists used a tilt-table test to diagnose Muir. Hooked to blood pressure monitors and an electrocardiogram, Muir seatbelted herself into a tilt-bed. Doctors and nurses monitored her resting heart rate, heart rhythm and blood pressure while she lay down, and then again while she stood up. If heart rate increases by at least 30 bpm in adults, or 40 bpm in adolescents, they meet criteria for a POTS diagnosis. Muir’s heart rate increased by 40 bpm, she said.

But a single test doesn’t establish a definitive diagnosis for POTS, said Robin Fabian, a nurse in the cardiology department at Children’s National Medical Center.

Many patients struggle silently, often missing school because of the exhausting symptoms and frequent cardiologist appointments.

“Some medical professionals don’t consider it to be a debilitating illness, but rather something that patients can overcome using a mind over matter approach, which is far from the truth,” Balan said. “It’s the lack of education and awareness that makes diagnosing POTS a difficult process.”

Recently, though, more patients have started asking to get tested for POTS, Fabian said. She isn’t sure why, but she said the increase in testing is likely due to more public attention and education.

Treatment varies for every patient, but most doctors recommend exercise—when POTS symptoms allow it—along with extreme hydration and salt consumption, which allows blood to better circulate throughout the body, reducing the risk of fainting and dizziness.

Treatment is usually “a multi-focused approach,” meaning it takes more than one medication to reduce symptoms, Fabian said.

Every morning, Muir takes Bentyl for her stomach pain, Dramamine for her nausea, beta blocker Propranolol to lower her heart rate and 800 milligrams of a probiotic. She’s on a paleo diet for the most part and drinks a recommended two liters of water every day.

POTS also takes a toll on patients’ families and friends. Some nights, Muir spends hours vomiting and wakes constantly from stomachaches. During the day, if symptoms are unbearable, her siblings make sure she has enough water and watch movies with her.

“It’s hard to watch someone you love be in pain for so long without any diagnosis, especially when it’s your little sister,” Caroline’s older sister, Avery (‘17), said. “We’d watch movies and SNL reruns and just hang out. It was the only thing I could really do for her—be there and make her laugh and kind of normalize things.”

For POTS patients, the future is uncertain. Muir is planning on going to college but has to consider nearby hospitals and clinics during her search. Trainor has gotten somewhat used to the disease, and though it stops her from taking part in the occasional strenuous activity, she said it won’t stop her from participating in college or professional life.

“I can’t be an astronaut or anything,” Trainor said. “But I am definitely not trying to do that.”

Still, living with POTS is often a battle. Some patients—diagnosed or not—are forced to cope with symptoms their entire lives, and current treatments are only so effective.

“A lot of people take their health for granted, and they expect to be healthy because they’re young,” Muir said. “But things can change for anybody in a second. I always tell people to be thankful for the health they have because it allows you to be the person you are.”