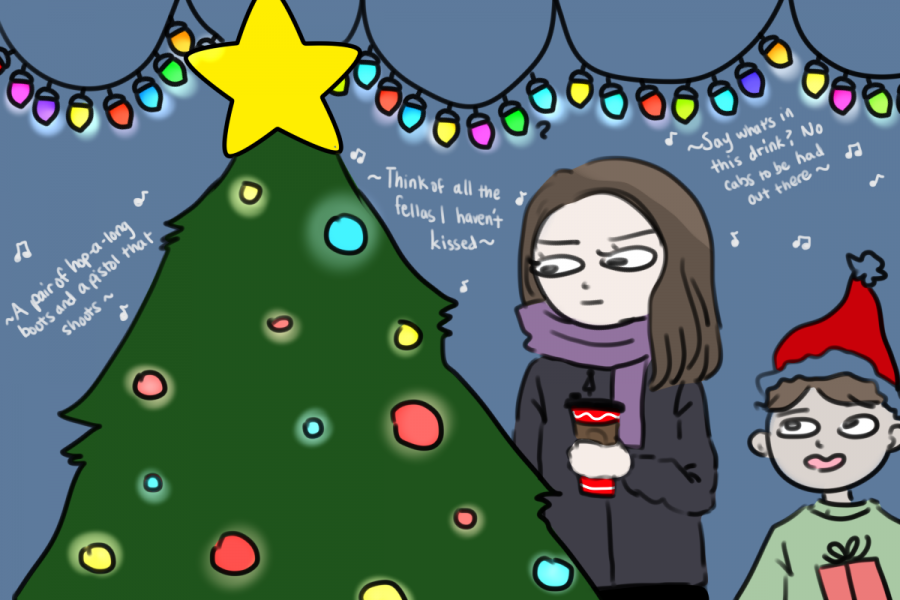 While we all love holiday cheer, more than a few Christmas songs send the wrong message.

The holiday season is upon us, and with that comes the incessant blaring of Christmas tunes in every store you walk into and radio station you turn on. It’s no wonder so many artists crank out Christmas albums—the carols are catchy, merry and bound to stick in your head for days.

But some of these popular holiday songs that have been recycled for decades still reinforce gender stereotypes and include topics like date rape. It’s obvious the industry needs to transition to more progressive music—and these five songs are the biggest offenders.

5. All I Want for Christmas is You

Yes, this is one of my favorite Christmas songs of all time. That doesn’t mean it couldn’t stand to be a little more feminist. Despite being the anthem for holiday romantics everywhere, Mariah Carey’s 1994 classic says the best present a woman can get is a man. In the song, Mariah sounds like a pining girl when she asks, “Santa won’t you bring me the one I really need? Won’t you please bring my baby to me?” How about some independence and empowerment? At least she’s breaking away from Christmas materialism—better to place value on love than on a present grabbed off a shelf.

This timeless tune is perfect for cranking in your car the day after Thanksgiving, but it’s hard to ignore the blatant gender stereotypes in the third verse: “A pair of hopalong boots and a pistol that shoots is the wish of Barney and Ben; Dolls that will talk and will go for a walk is the hope of Janice and Jen.” Yeesh. I’m all for “silver lanes aglow” and carols “right within your heart,” but I draw the line at telling young children what type of presents they should want. Maybe Barney happens to love playing with dolls, and Janice actually really wants a pistol (not that I think she should get one—we have a large enough gun control issue as it is without giving them to children).

I don’t know if I’m ever really in the mood to listen to Eartha Kitt try to seduce Santa Claus, but obviously some people enjoy the track. Pet names like “baby,” “honey” and “cutie” are fine for serious relationships, but trying to manipulate Saint Nick into giving you more presents isn’t the right setting. By singing, “think of all the fun I’ve missed, think of all the fellas that I haven’t kissed. Next year I could be just as good, if you’ll check off my Christmas list,” Kitt portrays women as scheming gold diggers. Objectification of women and reinforcement of old-fashioned stereotypes isn’t something that’s ever acceptable—and it’s even sadder coming from the mouth of another woman.

2. Do They Know It’s Christmas

You probably haven’t heard of this song by British charity supergroup Band Aid. I’m a Christmas music fanatic, and I hadn’t either until I scrolled through Spotify’s endless library of holiday tunes. While the song raised over 10 million dollars within the first year of release for the 1984 famine in Ethiopia, the lyrics are ludicrous.

Lines like “where the only water flowing is the bitter sting of tears” and “where nothing ever grows, no rain or rivers flow” attempt to evoke sympathy for the humanitarian crisis in Ethiopia, but instead they depict the country as a barren wasteland. The song also only refers to the victims as “Africans,” which creates more misleading and racist generalizations. Once again, the white man’s burden rears its ugly head, even if it’s well intended. Another misguided sentiment? U2 lead singer Bono’s line in the third verse reminding the audience to “thank God it’s them instead of you.”

While the call-and-response in the wintry duet “Baby it’s Cold Outside” may seem coy and flirtatious at first, the man’s relentless attempts to persuade the woman to stay the night quickly begin to sound like sexual harassment. Didn’t anyone ever teach Frank Loesser that pressuring a woman into saying “yes” isn’t considered consent? Sure, the song was written in 1944, but it’s still a popular cover song today—and our generation’s artists should know better.

Even if the conversation is waved off as harmless, the lyrics that come after definitely aren’t: “The neighbors might think (Baby, it’s bad out there). Say what’s in this drink? (No cabs to be had out there).” That, Frank Loesser, is called date rape—and while people may have turned their heads in the past, it’s definitely frowned upon in today’s society.

And the hypocrisy! Nobody bats an eye at a man’s persistence, but if a woman “gives in,” then her reputation is at stake; she repeatedly agonizes what “the neighbors might think,” frets that her “sister will be suspicious” and worries that “there’s bound to be talk tomorrow.” Double standard much? Even when the girl finally responds “the answer is no,” the man doesn’t give up. How much more explicit can you be?

Recently, though, multiple radio stations across the country have banned the song from their rotation, according to NPR (hallelujah!). But disappointingly enough, the backlash from listeners has been even larger than the support for the ban in the first place—looks like the push for non-offensive Christmas music will be an uphill battle.

Hopefully I haven’t totally shattered your childhood Christmas bubble—I imagine the feeling is comparable to when my Jewish best friend told me Santa wasn’t real in first grade. But that doesn’t change the fact that modern artists must transition these outdated classics to the modern era. We live in a time of progressive thinking, and our Christmas carols should reflect our values. Happy holidays!