The Black and White • December 7, 2018 • https://theblackandwhite.net/61887/sports/ncaa-basketball-preview-who-will-leave-as-champion/

NCAA basketball preview: Who will leave as champion? 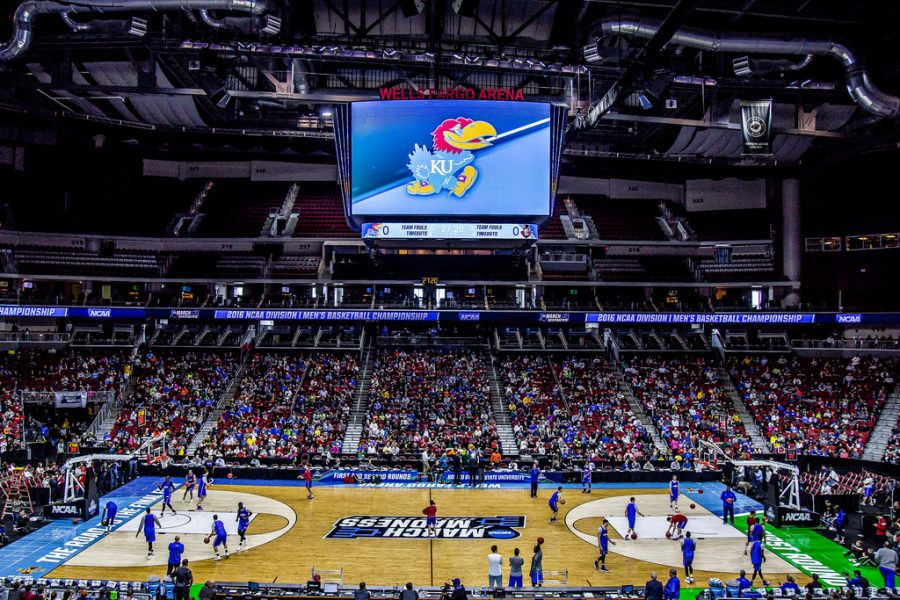 By Harry Kaplan and Bennett Solomon

The 2018-2019 NCAA Basketball Season has tipped off. With Villanova—the reigning national champs—losing many key players, which up and coming team will dethrone last year’s champions?

The Villanova Wildcats are fresh off their 2018 championship season, which marked their second national title in three years. Head coach Jay Wright and the team look to repeat as national champions for the first time since the Florida Gators in 2006 and 2007. After losing stars Jalen Brunson, Mikal Bridges, Donte DiVincenzo and Omari Spellman to the NBA, Villanova will rely on seniors Phil Booth and Eric Paschall to carry the load. Despite last year’s dominant season, the Wildcats have gotten off to a slow start—getting blown out by Michigan and losing to an unranked Furman team at home. Expect Villanova to bounce back in the coming weeks, although we don’t see them getting back to the Final Four.

The Michigan Wolverines came up just short of winning the NCAA tournament last season, falling to Villanova 62–79 in the championship. Michigan had an unbelievable run, which included Jordan Poole’s iconic buzzer beater to defeat Houston and their final four win against “Cinderella team” Loyola Chicago. Despite the loss of star center Mo Wagner, the young Michigan team will look to continue their past success during the 2018-2019 season. They’re off to a good start, with three wins over top 25 teams including 21st ranked Villanova, 13th ranked North Carolina and previously 19th ranked Purdue.

The Maryland Terrapins missed the NCAA tournament last year for the first time since 2014. With coach Mark Turgeon in the hot seat, will Maryland make it back to the Big Dance? This year the Terps had the seventh best recruiting class according to ESPN, headlined by five star forward Jalen Smith and top-100 prospects Aaron Wiggins and Eric Ayala. Although star guard Kevin Huerter decided to take his talents to the NBA, both Anthony Cowan Jr. and Bruno Fernando opted to return. With plenty of young star power, Maryland is heading in the right direction to potentially be a top 25 ranked team.

Despite Duke’s loss to number one ranked Gonzaga early this season in the Maui Invitational, we still see Duke dominating the regular season and winning the National Championship. With possibly the greatest recruiting class of all time––including R.J. Barrett, Zion Williamson, Cam Reddish and Tre Jones––this may be coach Mike Krzyzewski’s most talented team ever. ESPN ranked Barrett, Williamson and Reddish as the top three players in the 2018 class, and so far they have been dominant for Duke. Expect to see these freshmen power the Blue Devils into the finals and earn Coach K his sixth national championship.

Does Georgetown Have a Tournament Team?

The Georgetown Hoyas have shown some promise early on this season, beating Illinois on the road in their third game of the season. Their only loss came to a weak Loyola Marymount team, which may hurt them in the long run. The Hoyas’ spot in the tournament will come down to how well they do in Big East play. Senior Jessie Govan leads the team with 18.3 points per game, but the Hoyas will have to have additional success from freshman guard James Akinjo to be tournament bound. We think that Georgetown can sneak into the tourney but isn’t likely to make it past the Sweet 16.

Other Teams to Watch

So far this season, there have been some unexpected teams making the top ten including Tennessee, Nevada and Auburn. These three teams have some elite players who could lead them to a deep run in March.

People don’t often associate the University of Tennessee Volunteers with basketball, but they’re ranked seventh in the country right now. They’re coming off a tough loss against number two ranked Kansas, but they put up a tough fight and only lost by six points. Returning South Eastern Conference player of year Grant Williams leads the Vols’ offense, so expect Tennessee to dominate the SEC play and earn a two or three seed heading into the NCAA tournament.

The University of Nevada currently occupies the sixth ranked spot in the country and has a pair of star senior twins––the Martins––returning this season to hopefully lead them to another magical run in the tourney. The Wolf Pack made it to the Sweet 16 last year as a seven seed and then lost to final four team Loyola Chicago. They don’t have the hardest schedule in the Mountain West conference, which could hinder their tournament performance. Expect Nevada to cruise through the regular season and possibly get a one or two seed heading into the tournament.

Auburn University is currently ranked eighth in the country. As another SEC school in the top ten, the Tigers already have some quality wins over Washington, Xavier and Arizona, but fell to Duke in Maui. Depending on how the Tigers do in conference play, expect to see them as a two–four seed heading into March.

The Furman Paladins are the final team on our watch list. The Paladins are currently ranked 25th in the country and have possibly the most surprising win of the season so far, beating Villanova by eight points on the road. Furman is led by guard Jordan Lyons who averages 21.8 points per game. It’s rare to see a team from the Southern Conference in the top 25, but the Paladins have snuck into the rankings. If Furman continues their success throughout the year and move up, expect Furman to grab a five or six seed in March.

Nassir Little, F, UNC: Little has a wingspan listed at 7’1” and can play lockdown defense against the best. Expect Little to put up big stats this year.

Romeo Langford, G, Indiana: Langford is a smooth player that will catch the eyes of NBA scouts. Langford sits at 6’6”, which, for a guard, is pretty scary.

Bol Bol, C, Oregon: Bol is a 7’3’’ rim protector who can lead Oregon deep into the tournament. If he works on his shot, he can be a star in the NBA someday.

Tacko Fall, C, UCF: Similar to Bol, Fall is a rim protector that stands at an astounding 7’6’’. With Fall being the tallest college basketball player and UCF’s number one rim-protector, Fall could put up monster stats.

Duke: Duke’s freshmen will lead the Blue Devils to yet another final four, and we think that Duke will dominate all season and bring home the sixth National Championship under Coach K.

Gonzaga: The Bulldogs showed that they can compete with anyone after beating Duke in Maui. Led by senior guard Josh Perkins, the Bulldogs will dominate their conference and continue their success under head coach Mark Few. There could be a rematch brewing in the tourney between Duke and Gonzaga, hopefully in the National Championship.

Michigan State: The Spartans were knocked out in the Round of 32 by Syracuse last year. Their loss as a number two seed was a disappointment to fans and busted brackets across the country. But, this year, we think the outcome will be different. At number ten in the country right now, the Spartans have beaten Texas and UCLA. Despite a loss to number two ranked Kansas in a nailbiter first game of the season, the Spartans have lots of potential for success, led by guard Cassius Winston. We think head coach Tom Izzo can take the Spartans to another final four, but it will come down to getting past the early tournament rounds.

Syracuse: The Orange are always a threat in the tourney, and our favorite underdog story this year. Coach Jim Boeheim leads the Syracuse team to success when most people doubt he can. In 2016, the Orange was an 11 seed and miraculously made it to the final four, losing to North Carolina in the semifinal. The Orange are unranked right now but have a quality win over Ohio State. Syracuse may not be the most talented team, but Boeheim’s coaching can make Syracuse a threat in March.