The Black and White • December 3, 2018 • https://theblackandwhite.net/61832/opinion/we-need-more-speaking-in-language-classes/ 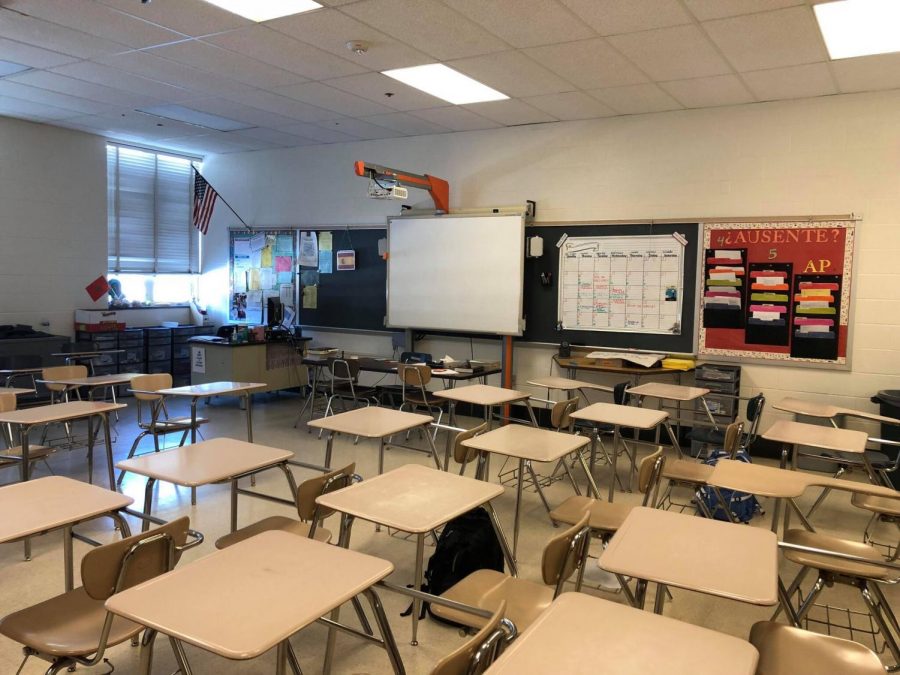 Often, many Whitman students understand the grammatical principles, and they know how to use them in their speaking, but their pronunciation and conversational skills are significantly subpar. To give students the ability to apply their years of language classes in the real world, the MCPS Office of Curriculum and Instructional Programs should change the language curriculums to emphasize speaking. Photo by Lukas Gates.

I opened my mouth to ask the little old lady for directions, but before I was even able to finish my sentence, she stormed off in disgust. I was left feeling a bit disappointed and painfully touristy. My coarse American accent evidently didn’t meet her standards.

This problem is a little embarrassing. I’ve studied French for over half a decade, and yet I’m unable to use my knowledge in the real world. Complex grammatical forms and hyper-descriptive vocab words are useful, but what’s lacking is much simpler. I just don’t have the speaking skills.

I’ve noticed this problem in class with many Whitman students. They understand the grammatical principles, and they know how to use them in their speaking, but their pronunciation and conversational skills are significantly subpar.

To give students the ability to apply their years of language classes in the real world, the MCPS Office of Curriculum and Instructional Programs should change the language curriculums to emphasize speaking. Teachers should also prioritize conversations in small groups over individual assignments.

Right now, teachers are well aware that kids struggle with speaking: Spanish teacher Kathleen Bartels, Chinese teacher Yi Song and French teacher Michelle Beach agree that even their best students may have problems with simple conversations. But unfortunately, language teachers don’t focus on speaking as much as they would like because county curriculums don’t allocate them  enough time. By the time students reach the AP level, it’s too late, since the set testing date and very clear guidelines leave teachers with next-to-no freedom, French teacher Michelle Beach said.

In classes with more leeway in their curriculum, like Arabic, more speaking opportunities are available. Arabic teacher Farah Kinani has full control over her class time, and she chooses to shape her course around speaking and culture. Student feedback and responses have been excellent, better than in her French classes, where she’s constrained by the curriculum, Kinani said. Her Arabic course sees increased student participation and more engagement.

Foreign language teachers should prioritize work in small groups, where students can speak the language in a non-judgmental setting without the pressure of grades. Over the summer, I took French lessons in small groups where the conversations were student-led. Only there to correct grammar and move the discussion along, the teacher served as a moderator. The classes were fun and helpful, and my French improved dramatically.

Admittedly, it’s hard to prompt students to speak in a language that isn’t their own, especially if they aren’t doing so for a grade. But this can be solved with teacher involvement. For example, language classes could also hold Socratic seminars, where groups of five to six students must speak about a specific topic for a completion grade. Forcing students to speak—but grading them on participation, rather than specific phrases—would inevitably make students more comfortable with oral communication.

Speaking is important not just because it allows us to communicate with native speakers, but also because it helps us read and write. In fact, when I moved to this country, I was taught to speak English first, and all else followed. By knowing how to speak, we can sound out the words in our head to help craft sensical phrases. Speaking even helps with grammar because we can sound out phrases in our head and see what “sounds right.”

As it stands, the county curriculum mismanages our priorities. We learn French, Chinese, and Spanish like they’re dead languages, and when it comes to using them, old ladies storm off in disgust. We’ve put years of hard work into learning foreign languages; it’s time we learned how to actually use them.