The Black and White • November 29, 2018 • https://theblackandwhite.net/61794/feature/qa-with-congressman-jamie-raskin/ 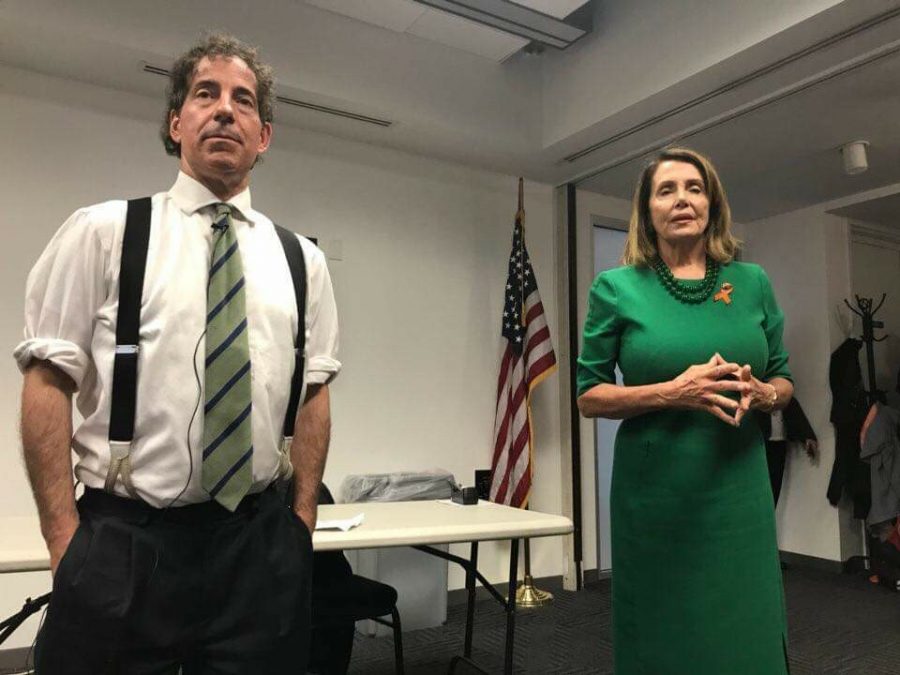 Congressman Raskin and House Minority Leader Nancy Pelosi speak to students at Raskin's summer program Democracy Summer. Raskin brings in guest speakers multiple times a week to inspire the students and give them insight from different leaders and politicians.

The Black & White spoke with Congressman Jamie Raskin, representing Maryland’s 8th district, about the recent midterm elections and student activism. Raskin, who was a professor of constitutional law at American University in D.C. for more than 25 years before being elected in 2016, has long been an advocate for youth empowerment and human rights.

The Black & White: During your time in Congress, how have you seen student activism impact policy?

Jamie Raskin: The most dramatic case was the national movement that young people galvanized after the Parkland massacre. The ‘grown-up’ organizations had repeatedly failed, even in the wake of terrible catastrophes, to change the course of public discussion. The young people led by the students at Parkland simply turned the politics of the country upside down.

I asked one of the Parkland kids why he thinks there’s been this transformation across the country after Parkland, but we didn’t see the same thing after the Sandy Hook massacre. He said, “The kids that were killed in Sandy Hook were six or seven years old, but the ones that were killed in Parkland were in their teens. We have the power to organize through social media, and we’re not going back to sleep.” To me, that was the definitive answer.

B&W: How would you encourage young people who can’t yet vote to be politically active?

JR: The great thing about politics is that there are so many ways to have an impact. Some people like doing real direct action work, like working in a homeless shelter or clinic, and that has a great social impact. Some people like to be involved in politics, and they can come work for the Democratic Party or Democracy Summer. Some people prefer to pick a particular issue, like the environment or gun violence. There are lots of different ways to be involved, but I just think we’re living in a time of great political energy and commitment, and we need everybody.

B&W: What’s the importance of student journalism and activism?

JR: I owe my whole original election to the Blair Silver Chips newspaper. They endorsed me because I had once defended the free speech rights of students at Blair and because they knew I was a champion of the rights of students. Normally a high school newspaper endorsement doesn’t account for too much, but the incumbent in my race lashed out at the students and told the principal that they needed to retract the endorsement and endorse the incumbent instead. The students refused and the Washington Post wrote about it. There was a big editorial called “The Senator vs. Silver Chips” and it was all about how the only grown-ups in the whole affair were the students. They stood up for their free speech rights and suddenly it became a really famous editorial endorsing me. I was just very grateful to them.

It was the Blair case that led me to say we need to have a book for high school students about what their rights are. I saw that high schools that should’ve been educating kids about their rights, in a lot of cases, were violating those rights. I’ve since written a book about the rights of students called “We the Students: Supreme Court Cases for and about Students.”