The Black and White • November 13, 2018 • https://theblackandwhite.net/61627/opinion/blogs/sorry-not-sorry-why-women-apologize-too-much-and-need-to-stop/

Sorry not sorry: Why women apologize too much and need to stop 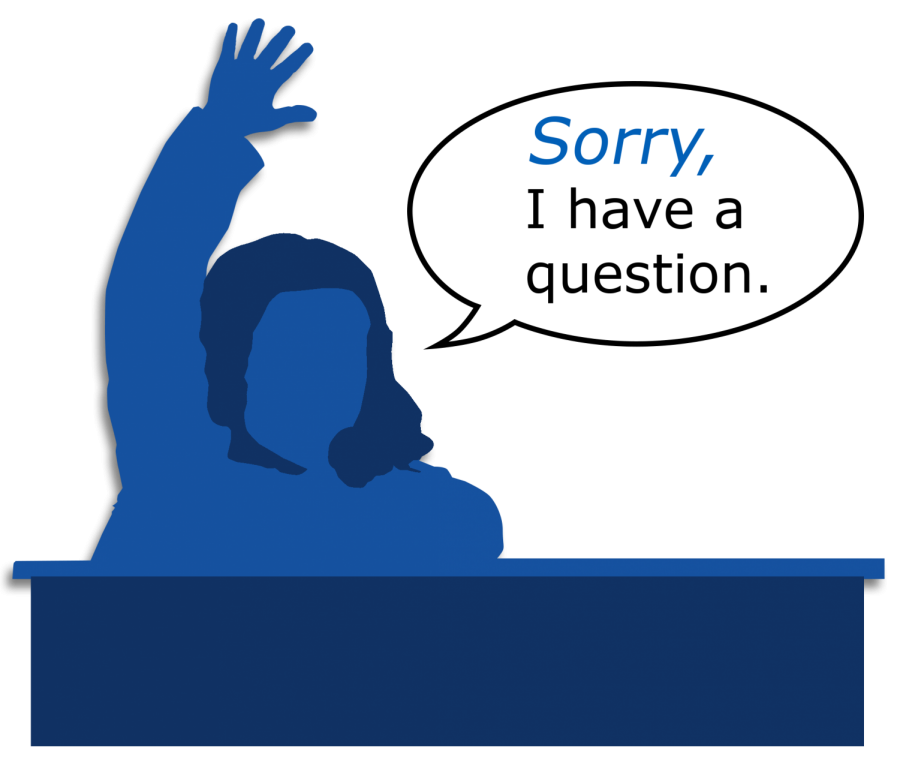 Our society fosters the idea that unapologetic women are aggressive or hostile. We’re caught in a double-bind: be confident and risk seeming aggressive or be passive and not be taken seriously. Apologizing isn’t only a waste of words, it’s indicative of a culture stuck in the 19th century. Graphic By Landon Hatcher.

Like all great stories, mine begins at the checkout counter of a Bethesda CVS. After setting a pack of Extra watermelon gum on the countertop, I fished through my weathered drawstring bag for the three dollars required for purchase. About fifteen seconds later, I heard myself speak two cursed words: “I’m sorry.”

Apologizing has always been my first instinct, and not just in pharmaceutical scenarios. Through the years, I’ve noticed that many of my female peers seem to be afflicted with a case of the “I’m sorry”s too. Though the reason for apologizing is different for everyone, a 2010 study by the National Center for Biotechnology Information found that women apologize more frequently than men because they’re more likely to believe that minor and insignificant actions are offensive.

When I first heard there was scientific reasoning behind my instinctive apologies, I thought it was ridiculous. I believed that this tendency was purely individual and based on personality. But after thinking about my CVS debacle, and so many other times just like it, I realized the study was accurate: I apologize when I think I’m being obtrusive, regardless of whether or not that may be true.

Though it might seem irrational, in some weird way, I like apologizing. I like the idea that it makes me seem more considerate. I like that saying “sorry” could help me avoid confrontation and conflict.

But in reality, apologizing doesn’t mean any of that. Instead, it leads me to constantly look over my shoulder to ensure that no one is angry with me. It means that, no matter the scenario, I’m self-conscious and concerned about what others will think—timidly tip-toeing when I could be confidently stomping.

Our society fosters the idea that unapologetic women are aggressive or hostile. In the workplace, women who use more direct communication are deemed belligerent or authoritarian. As a result, women must say “sorry” in order to be accepted in professional environments. But at the same time, our frequent apologies can be self-destructing by making us seem passive. If we don’t place value behind our opinions and actions, why should anyone else? We’re caught in a double-bind: be confident and risk seeming aggressive or be passive and not be taken seriously. Apologizing isn’t only a waste of words, it’s indicative of a culture stuck in the 19th century.

Though it’s important to apologize when we really hurt people, our constant need to say “sorry” is annoying. We need to learn to distinguish between situations that warrant an apology and those that don’t.

“Sorry” shouldn’t be every other word that comes out of my mouth. I’m tired of giving apologies, and I’m tired of hearing them.  Why should anyone care if I don’t apologize for taking an extra two seconds to pay for my gum?

So, if you’re moved by this article, I’m happy for you. And if you’re not, if you didn’t gain anything and hate me for wasting your time, guess what? I’m not sorry.