The Black and White • November 9, 2018 • https://theblackandwhite.net/61569/news/mcps-considering-return-to-ten-day-spring-break/ 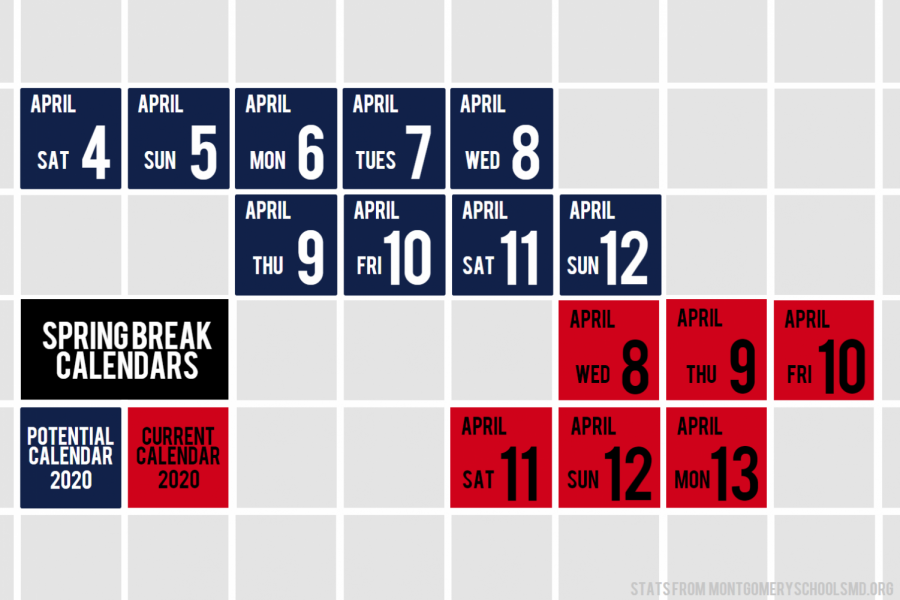 The Board of Education is discussing a return to a ten-day spring break for the 2019-20 school year. The Board is considering two academic calendar options, one which is similar to the current calendar and another which would return to the lengthened spring break.

The current academic calendar allots a six-day spring break with early release days at the end of each quarter for grading and planning time for teachers.

The calendar option similar to this year’s would include one non-instructional day per quarter and a six-day spring break. The alternative option would include early release days quarterly, and spring break lengthened by four days.

Both prospective calendars begin school September 3 and end June 15, complying with Governor Larry Hogan’s executive order in 2016 mandating that school must begin after Labor Day and end no later than June 15.

The Board avoided shortening spring break in the 2017-18 school year because a number of religious holidays fell on weekends.

Junior Caroline Itzkoff said she dislikes the current shortened break and would favor a return to the ten-day break.

“[A shortened spring break is] not really going to work because everybody is going to be away on those days anyway,” Itzkoff said. “When you’ve got all this work to do, it’s really nice to have that kind of a break. When they shorten it you feel cheated.”

Freshman Bertille Aubert said she’s one of the students who will miss school this school year for a family vacation on the week of spring break.

“It’s pretty close to AP exams, so that’s kind of rough because if we’re learning new material, I won’t have time to master it before the AP exam,” Aubert said. “Also, I would have to do homework over break because I would have to catch up for everything I’m missing.”

The Board is seeking public comment on the calendar options before they vote in November.