The Black and White • November 8, 2018 • https://theblackandwhite.net/61538/news/students-attend-out-of-the-darkness-walk-in-honor-of-student-jojo-greenberg/ 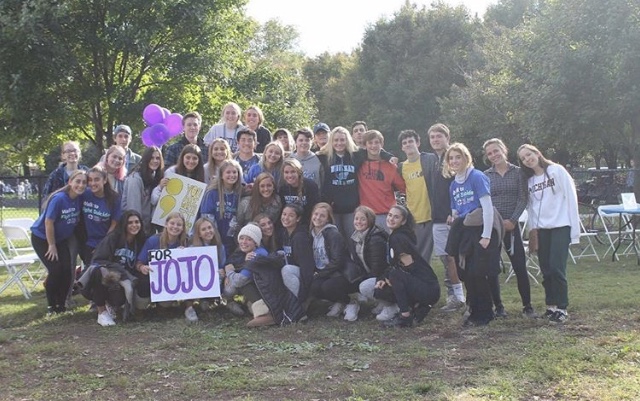 About 20 students gathered Oct. 20 for a walk to raise awareness about suicide. The event, sponsored by the American Foundation for Suicide Prevention, raised over $280,000 from the walk that will go to research, advocacy and other related mental health resources.

About 25 Whitman students attended the 2018 annual D.C. Out of the Darkness Walk in honor of Jojo Greenberg, a Whitman student who passed away last year. Held at the Lincoln Memorial Oct. 20, the walk helped raise awareness about suicide and support the American Foundation for Suicide Prevention.

The volunteer chair for the AFSP, Dhyana Parker, invited groups to set up tables in memoriam of friends and family who took their own lives. Whitman students visited different tables and talked to strangers about their own experiences helping friends with depression and dealing with grief.

“It honestly just felt really great to do something that I knew was helping people out,” junior Kate Snedeker said. “It wasn’t just the loss of other people, but preventing suicide too. People with major depression and anxiety were there and it felt so good to see them have an outlet and to walk in support of them.”

Parker, the lead organizer of the event, first started volunteering at the AFSP in 2014 because of her personal experience with mental health issues; after her brother committed suicide in 1994, she became chronically depressed. It can often be hard to talk about suicidal thoughts when family members and friends don’t acknowledge or emphasize mental illness, Parker said.

“Kids and teens might think that their voice doesn’t matter or that people won’t believe them if they talk about their problems,” Parker said. “But that’s the furthest thing from the truth.”

Junior Adrian Knappertz attended the walk, and said that a friend’s suicide attempt during middle school, in addition to Jojo’s recent passing away, made them more aware mental issue problems and motivated them to go.

“It really shook our friend group, and it made me have a very different outlook on the world,” Knappertz said. “Last year, when Jojo passed, it affected me a lot more than I thought it would. I just thought that with my personal experiences, I had to go to support and be there for people who were good friends with Jojo and to support the movement.”

In addition to supporting suicide awareness, participants also raised money. By Nov. 1, the D.C. walk had raised over $280,000 for the cause. “Team Jojo,” the group organized in honor of Greenberg, raised over $5,000 through friends and community members.

“I posted the links on my Instagram and other social media to tell people to donate, because it’s a great cause,” Knappertz said. “Not only do people see the link and posts and want to donate, but they also become more aware and could be more likely to look at the American Foundation for Suicide Prevention’s website for resources or more information.”

Participants walked around the National Mall for about two hours before congregating for a remembrance ceremony where people from different teams greeted each other and shared stories. The ceremony also included presentations by speakers about suicide prevention.

“It gave me closure,” junior Gwen Arbetman said. “It was sad, but it was also nice to remember Jojo in a positive light and to look forward to a community that treats others with respect and kindness.”