The Black and White • November 7, 2018 • https://theblackandwhite.net/61523/sports/girls-soccer-defeats-quince-orchard-1-0-advances-to-state-semi-final/ 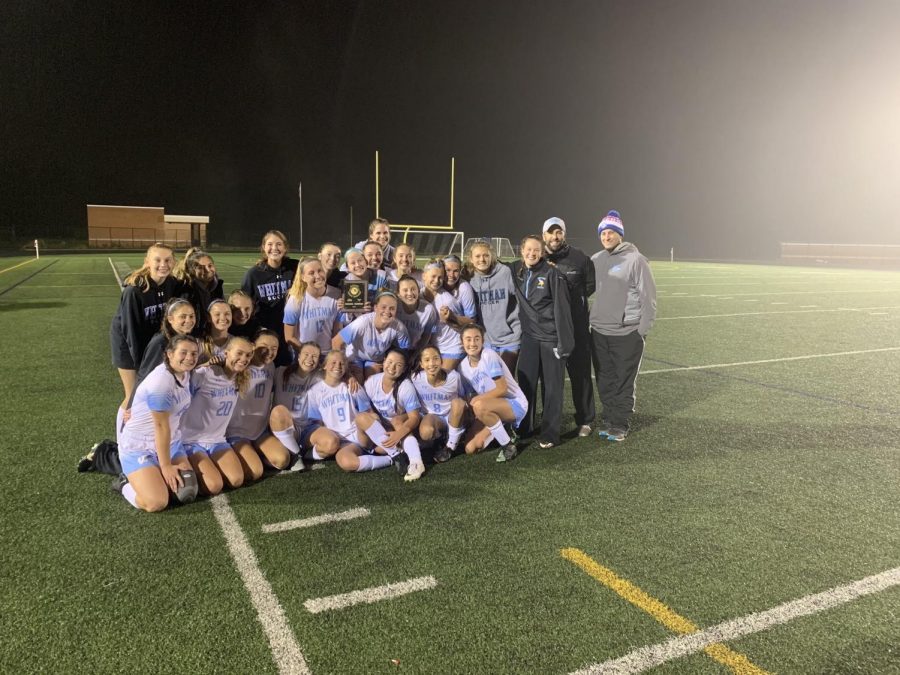 The girls soccer team celebrate their regional title after a last minute goal against Quince Orchard. The Vikes take on the Severna Park Falcons Saturday in the state semifinals. Photo courtesy Whitman soccer.

Both the Cougars and the Vikes had impressive seasons, each with only one loss going into the game. The Vikes’ one loss was to the Cougars 1–0 in their season opener.

“We were nervous, but I think it motivated us more because we wanted to beat them, especially since they kicked us out of playoffs last year,” forward Isabella Bravo said. “We were also really excited and confident going into the game which led to our win.”

The game was long and physical, with not too many shots from either team throughout both halves. Goalie Katie Stender-Moore played a strong game with key saves, but defenders Morgan Wiese and Sophie Nichols contained the Cougars offense, preventing them from nearing the goal.

After nearly 90 minutes of scoreless play, the game was seemingly going to end and move to an overtime period. With under a minute of regulation time remaining, the Vikes’ offense found a sudden opportunity. Forward Isabella Bravo had a long cross from the left to forward Delaney DeMartino, who headed the ball into the goal with just 40 seconds left to win the game.

“Towards the end of the game, we really wanted to win, so we started to pick up the intensity,” Bravo said. “We also knew we had another 20 minutes just in case, but I know that none of us wanted to go into overtime or penalty kicks.”

The Vikes are now the 4A West Region Champions, and have advanced to the state semi-finals. They will face the Severna Park Falcons this Saturday at Wise High School at 7:30.

“I’m really excited. The whole team needs to stay focused during the game so that we can make state finals,” forward Morgan Riso said. “We haven’t been there as a team in a long time.”