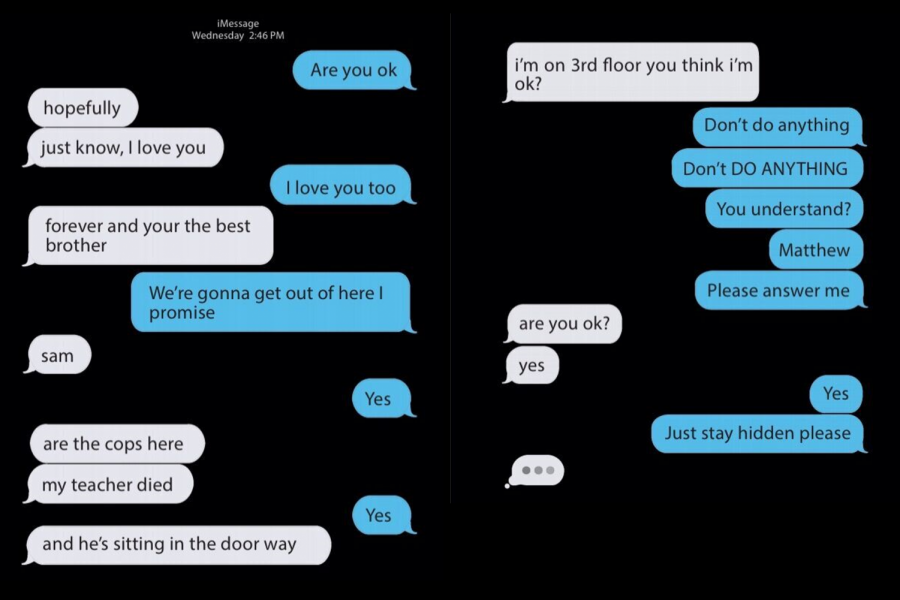 These text messages were taken from actual texts sent between Marjory Stoneman Douglas High School senior Sam Zeif and his younger brother Matthew Zeif, a freshman at the school, during the shooting. Both survived. Graphic by Iris Bernendes-Dean.

On Feb. 14, a gunman opened fire at Marjory Stoneman Douglas High School in Parkland, Florida. At the end of the rampage, 17 students and staff were dead, prompting grief in the community and across the country.

But the tragedy has also united many, reigniting the contentious debate over gun control and school safety and launching a new wave of political activism led by the students themselves.

An Increase in Activism

Four days after the shooting, thousands of Florida residents marched in the sweltering heat to a state courthouse in Fort Lauderdale for a gun control rally. The protesters were hoping for stricter gun laws; some of the student protesters were still reeling from the loss of their classmates. They held posters like “Protect Kids, Not Guns” and “Gun Control is a Public Health Issue” and chanted “No More Guns.”

In the aftermath of the shooting, Stoneman Douglas students spearheaded the change; they were vocal about their tragedy and their desire to be the last school shooting.

“I thought I was never going to see my family again,” Stoneman Douglas senior Sam Zeif said. “I thought it was the end. What we need right now is sensible gun control and safe schools so this never happens again.”

Thousands of people have protested since the tragedy. About 1,000 local students from MCPS and DCPS missed school and marched to the Capitol Feb. 21.

“It’s really awful what happened and it’s up to my generation to accomplish what adults haven’t been able to do,” said sophomore Gwen Parks, who marched in the Feb. 21 march.

Whitman students walked out of the building March 14 for 17 minutes to honor the lives lost. Thousands of people also convened in D.C. for a national protest, the March for our Lives, March 24.

“I think the walkout is a really fine idea and I’m proud of all of our students,” principal Alan Goodwin said. “They’re the futures of America and I hope the legislators are listening.”

Whitman clubs have also been active. Students wrote letters to Stoneman Douglas students, Whitmaniacs encouraged students to sign a “Douglas Strong” banner to be sent to Parkland and students started a new group called #NeverAgain Whitman to discuss ways to be politically active. They worked with 25 other schools in the area to plan the March 14 walkout.

“It’s very empowering to see what’s happened after the shooting,” senior Rabhya Mehrotra said. “There’s been other shootings, like Columbine, where there hasn’t been much political activism. It’s an unfortunate thing to cause this activism but I hope it’ll translate into long-term change.”

“This has absolutely brought a sense of unity,” Coral Glades senior Frankie Gaynor said. “Everyone’s been so much more kind to each other. We’re still on edge and grieving, but it’s brought the community together a lot.”

Students hope the movement will result in action from lawmakers who had previously been ambivalent towards gun control measures.

Just over a month before the tragedy, community members had notified police about future shooter Nikolas Cruz’s disturbing social media pages, obsession with guns and desire to kill people. The tip wasn’t heavily investigated. During the rampage, school resource officer Scott Peterson, the lone officer with a gun on school property, failed to engage the shooter despite hearing shots.

This failure to prevent the tragedy has opened the debate over who should be armed in schools and how easy it should be to get a firearm. Gun control advocates have tried to ban assault weapons and raise the age to buy a gun from 18 to 21, while some, like Florida legislators, believe arming teachers with guns would prevent such tragedies.

“Especially with all of these incidents happening by kids and teens, there’s definitely an issue,” senior Cameron Newcombe said.

With high school survivors leading the message on social media, the call for change has been stronger than previous mass shootings. But many Republican lawmakers rarely change their stance on gun rights, causing some to believe that any significant legislation is unlikely.

“Right now, we don’t have the Congress in place to have overarching legislation,”  said Jennifer Stapleton, a Maryland representative for Moms Demand Action. “With 97 percent of people thinking there should be background checks on all gun sales, if we vote them out, the politicians will eventually catch up with the voters.”

Some gun advocates and organizations instead believe that limiting gun rights wouldn’t be helpful.

“We will continue to oppose gun control measures that only serve to punish law-abiding citizens,” an NRA press release said. “These are not mutually exclusive or unachievable goals.”

The NRA, however, has suffered since the attack. In the couple weeks after the shooting, companies like Delta Airlines and Hertz have formally ended their relations with the organization. Dick’s Sporting Goods will also stop selling assault-style weapons.

Zeif believes adding more guns would only cause more destruction. He voiced his frustration at the lack of legislation in the listening session he attended with President Donald Trump Feb. 21. Though Zeif appreciated that Trump heard both sides of the issue, he wished the discussion could have been more about gun legislation, not mental health.

School Safety Measures on the Rise

When Zeif huddled in a classroom in Stoneman Douglas, he texted his younger brother, who was hiding on the floor above. His brother’s teacher had been killed and Zeif didn’t know if he’d ever see him or his loved ones again. In another part of the building, his friend had been shot to death.

High schools all over the country have been on edge since the shooting. The Educator’s School Safety Network reported that every day in the week after the shooting, more than 50 threats or violent incidents were reported in schools across the country. The group usually receives 10 to 12 incidents a day. Some of those threats were in Montgomery County: a Clarksburg student was arrested for bringing a handgun to school Feb. 15, Walter Johnson and Churchill High Schools received bomb threats Feb. 21 and Albert Einstein High School received a bomb threat March 1.

These fears rose to the surface at Whitman during the Vike-A-Thon dance Feb. 24 when some people initially thought the drumline performance was gunfire.

“The drums sounded weird and then I heard a lot of kids screaming,” a freshman said. “Because of the recent events, it was more in my mind at the time.”

The violence has prompted many schools to look at ways to protect themselves from any type of attack, and Whitman is no different.

Students are now urged to not walk outside the building between classes, and teachers who teach in Whittier Woods and the portables are advised to dismiss their classes early to reduce hallway traffic. Security officers will also prioritize locking all doors to school and a new entrance will be designed over the summer with a different walkway for guests, so they can’t enter the building without passing through the main office.

“I believe in being proactive rather than reactive,” head of security Cherisse Milliner said.

Whitman will also conduct evacuation drills, where students walk to the end of the parking lot. Goodwin believes the preventative actions schools can realistically take are limited.

“There’s only small things we can do and the most important thing is to tell students to be vigilant,” Goodwin said. “We always tell people that if you see something, say something.”

Still, even with added security, students are more fearful that a similar event will happen.

“I was really horrified, and you can’t help but get nervous that that’s going to happen here,” sophomore Emily Mayo said. “There’s just an ever-present worry in the back of my mind that something’s going to happen.”

This story was published in March 2018 magazine issue of the Black & White.