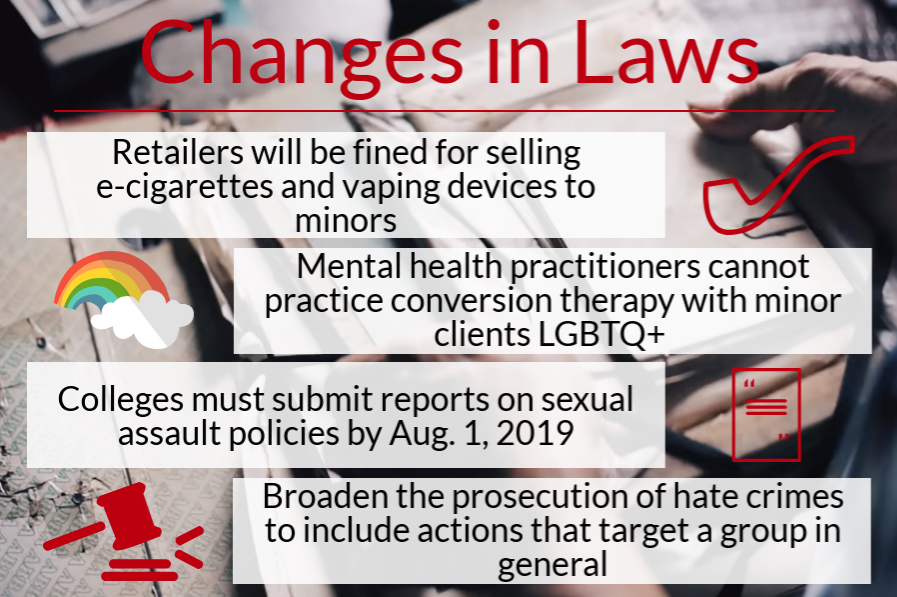 Over 400 new laws, ranging from renaming rest stops to banning LGBTQ+ conversion therapy for minors took effect in Maryland Oct. 1. Here is a summary of some of the major laws regarding health, firearms, transportation and crime.

Retailers who sell e-cigarettes and vapes to minors are now subject to the same fines as those who sell tobacco products to minors. A first offense can result in a fine up to $300. Additionally, if a law enforcement officer catches a minor in possession of an e-cigarette or vape, the officer may issue a citation.

“I think that the new Juul law isn’t harsh enough,” junior Jonathan Young said. “I think that bringing a Juul to school is a serious problem that needs to be heavily discouraged.”

When doctors are now required to disclose the risks and benefits of opioids to their patients when they prescribe them.

After the school shooting last year in Parkland, Fl., Maryland joined 12 other states in enacting a Red Flag law. The law allows a law enforcement officer or an immediate family member to seek an extreme protective court order to prevent someone who is considered a threat—either to themselves or to others—from purchasing or possessing a firearm for a certain amount of time.

Bump stocks and similar devices, which can be attached to guns to increase the rate of fire, are also now outlawed.

“I don’t even think guns should be around, unless you’re a police officer or in the army,” sophomore Lekha Kachoria said. “I think restricting people as much as they can be is best.”

Adults between the ages of 18 and 25 can now take a provisional driver’s license test three months after obtaining their learner’s permit; the previous requirement was nine months. Applicants still need to practice for 60 hours behind the wheel under the supervision of someone older than 21 with a valid driver’s licence that’s been held for three or more years.

To make it easier for people to obtain learner’s permits or driver’s licenses, the Motor Vehicle Administration can now provide birth certificate copies for a fee if they’re on record with the Maryland Department of Health.

“I don’t think it’s a very big change, but it will make it easier for people to get their permit who don’t have easy access to their birth certificate, so that’s nice,” sophomore Kaya Ginsky said.

Lastly, the penalty for not stopping when a school bus stops increased from up to a 90 day imprisonment to up to a one year imprisonment. Individuals may also be fined up to $1,000.

Every higher education institution in Maryland has until August 1, 2019, to submit a report on their policies surrounding protocol responding to allegations of sexual assault. Policies now need to include a description of the rights of a student who reports a of violation of the college’s sexual assault policy.

After hate-based incidents took place at several Montgomery County schools two years ago, the Maryland General Assembly broadened the definition of hate crimes to include actions that target a general group, rather than just a specific individual.

Lastly, high school principals may report bullying or cyberbullying incidents to the police after a school investigation if the principal believes a student committed.