The Black and White • October 19, 2018 • https://theblackandwhite.net/61336/opinion/blogs/america-stop-stereotyping-asian-men/ 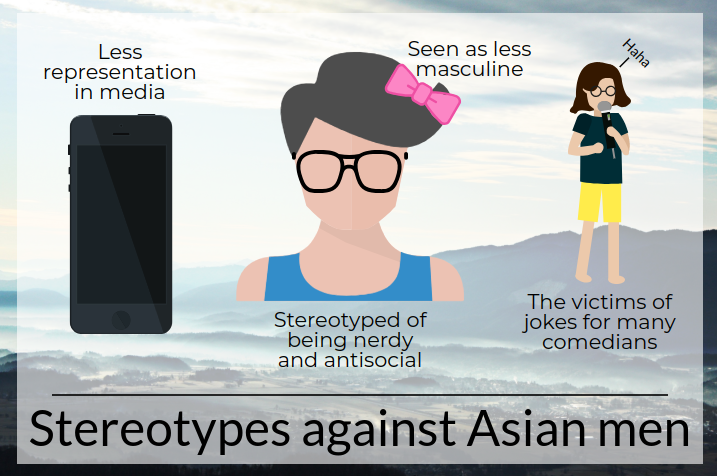 Everyone in my family was surprised when my brother introduced us to his white girlfriend. Family members jokingly asked him if his girlfriend thought he was attractive despite the fact that he’s Asian. They adore her and think she’s beautiful, but somehow, her race always slips into the conversation.

These jokes weren’t intended to hurt my brother, but they do show that stereotyping Asian men as unattractive is deeply ingrained our culture. Somehow, it’s funny and surprising when an Asian man dates a white woman––it’s strange that someone would find an Asian man attractive.

In 2002, Steve Harvey joked that pages of the book How to Date White Woman: A Practical Guide to Asian Men would be empty because no one would date them to begin with. The fact that celebrities make these kinds of jokes only perpetuate the stereotype that all Asian men are unattractive and undesirable.

In Hollywood, Asian men are often portrayed as nerds, socially awkward and unable to talk to girls. This archetype contributes to the stereotype that Asian men aren’t “masculine enough” or that they’re “unattractive”––which transfers over to affect Asian men’s actual dating life. A 2014 study by OKCupid found that Asian men had the least amount of interracial matches compared to other races and were seen as “least attractive” as well.

Prejudice against Asian men isn’t limited to TV. Magazines often create an image of what an “ideal” person should look like, and they continuously exclude Asian men from these issues. A 2015 study by the College of William and Mary found that of magazines where Asian Americans were represented, only 21 percent included Asian men. It would seem Asian men “don’t have the right look” for what others consider to be attractive.