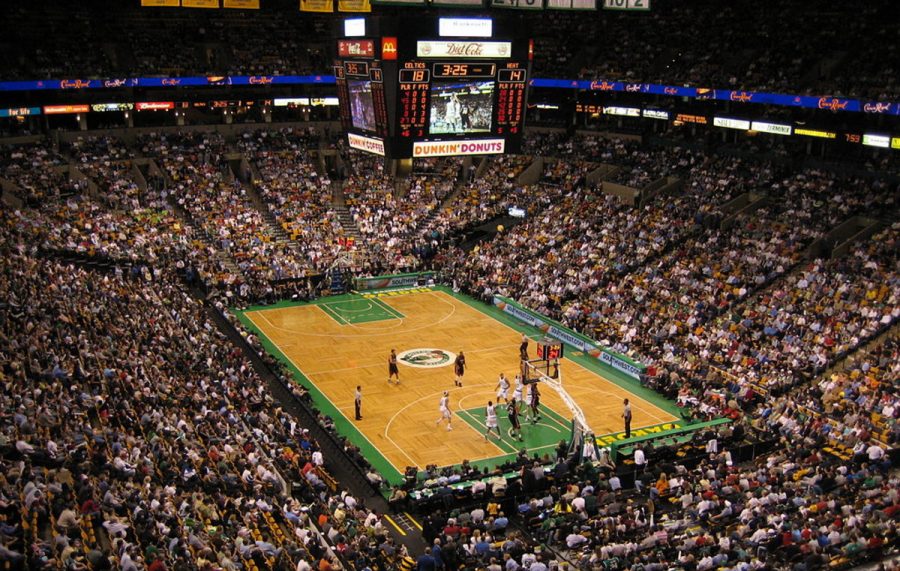 The 2018 NBA season starts tonight, with the Boston Celtics tipping off against the Philadelphia 76ers.

By Mateo Gutierrez and Harry Kaplan

After four months of hockey, baseball and football, the NBA season is almost underway. Will the Golden State Warriors repeat their championship runs, or will another team end their dominant streak? On Oct. 16, the Boston Celtics will tip-off against the Philadelphia 76ers at 8:00 pm in the first game of TNT’s doubleheader. The Golden State Warriors will then host the Oklahoma City Thunder at 10:30 pm. NBA tip-off week will continue through Oct 21, with a number championship contenders facing off.

The Warriors enter this season looking to win their third straight NBA championship. The team looks stronger than ever; with the addition of All-Star DeMarcus Cousins during the offseason, the team finally acquired an elite center, a position where they had previously been weak.

The Cleveland Cavaliers are going into this season looking to rebuild after losing arguably the greatest player of our generation, LeBron James. Cleveland will rely on veterans such as Kevin Love and J.R. Smith to lead this young team, featuring prospects like Collin Sexton and Sam Dekker. The Cavaliers enter the season with low expectations, but with the right team chemistry, could make the playoffs.

The Washington Wizards are coming off an underwhelming year: they earned the eighth seed in the playoffs last May, and lost in the first round. However this off-season, Washington decided to move on from their longtime center Marcin Gortat and signed three-time Defensive Player of the Year Dwight Howard. With guards John Wall and Bradley Beal carrying the scoring load, the Wizards are looking to regain their potential to be top three team in the Eastern Conference.

Rookies to look out for

Boston Celtics – The Celtics were one game away from knocking off LeBron and the Cavs last year, even without their two best players Kyrie Irving and Gordon Hayward. With the two All-Stars sidelined, young players like Jayson Tatum, Jaylen Brown and Terry Rozier stepped in to fill key roles on the team. The Celtics will look to contend for a championship with one of the deepest rosters in the NBA.

Toronto Raptors – The Raptors seem to be a regular season powerhouse. They were the number one seed last year and got swept at the hands of LeBron and the Cavaliers. However, Toronto made a blockbuster trade which sent star DeMar DeRozan to San Antonio in return for two-time All-Star Kawhi Leonard. They are in contention with the Celtics to win the east.

Philadelphia 76ers – The 76ers wasted a golden opportunity last year against an injured Boston Celtics team, losing their series 4-1 in the second round of the playoffs. They are looking to rebound this season after improving their win total by 24 games last year. Ben Simmons and Joel Embiid will lead the charge for this young squad.

Washington Wizards – With the addition of Dwight Howard, could Washington finally get over the “mediocre” hump? John Wall and Bradley Beal will lead the Wizards to the playoffs this year following an unsuccessful playoff run last season. Washington could be a sneaky Eastern Conference team if they live up to their potential.

Indiana Pacers – The Victor Oladipo era has just begun, and the Pacers will look to continue continue last year’s success into this season. The Pacers were one win away from knocking off LeBron and the Cavs, and now without Cleveland as a major threat, the Pacers could very well take the East.

Miami Heat – The Miami Heat have ranged from the 4-8 seeds the past four years since LeBron left for Cleveland. With Dwayne Wade coming back for his last year, Goran Dragic and Hassan Whiteside will look to help Wade carry Miami to the playoffs.

Milwaukee Bucks – Giannis Antetokounmpo returns as a projected front-runner for the 2019 MVP race and the leader of the Milwaukee squad. In recent months, the Bucks gained veteran Brook Lopez and drafted college sensation Donte DiVincenzo, bolstering their already deep roster for a potential playoff run.

Detroit Pistons – After a disappointing season last year, Detroit comes into this season looking to prove themselves as a playoff team. Although they lack a strong backcourt, the Pistons have possibly the best frontcourt in the East led by Blake Griffin and Andre Drummond. If Detroit’s guards can step up, expect to see the Pistons slip into the playoffs.

Golden State Warriors – When your starting lineup consists of five All-Stars, it’s nearly impossible to not win your conference. With arguably the best center in the NBA, Demarcus Cousins, joining the squad, Stephen Curry and the Warriors are likely unbeatable. Finals MVP Kevin Durant is rumored to be planning leave the team after this season, but for now get ready to see him lift the Larry O’Brien Trophy once again.

Houston Rockets – After falling one game short of knocking the Warriors out of the playoffs last year, 2018 MVP James Harden and the Rockets come into this year looking for revenge. Their deep bench and new addition, Carmelo Anthony, makes them one of the few real threats to the Warriors.

Oklahoma City Thunder – After a disappointing first round exit last year, the Thunder come into the season longing for a return to the Conference Finals. All-Stars Russell Westbrook and Paul George come back to lead the Thunder squad with former Hawks guard Dennis Schroder boosting the bench. Keep your eyes on this Thunder team.

Los Angeles Lakers – It doesn’t matter who the coach or supporting cast is— Lebron can carry any team to the playoffs. The Lakers had a busy offseason with Lebron joining the team and veteran additions in Lance Stephenson, Javale McGee, Michael Beasley and Rajon Rondo. Backed up with young talent in Lonzo Ball, Brandon Ingram and Kyle Kuzma, LA could be looking at their first playoff appearance in five years.

Utah Jazz – The Jazz surprised the whole league as they knocked off a stacked OKC Thunder team in last year’s playoffs. 2017 rookie sensation Donovan Mitchell is destined to have another spectacular year leading the Jazz. Duke star Grayson Allen enters the league with the Utah squad and could turn out to be one of the best rookies in his class.

San Antonio Spurs – Demar Derozan joins the Spurs in their quest to be a top team in the West again. Veterans Pau Gasol and LaMarcus Aldridge occupy the loaded frontcourt as San Antonio also welcomes the 18th overall pick Lonnie Walker IV. Although San Antonio has the roster to get to the playoffs, don’t expect to see them make it past the first round.

Denver Nuggets – One of the more underrated teams in the NBA, the Nuggets are bound for their first playoff appearance since 2013. Nikola Jokic leads the young Denver team along with high school phenom-turned Missouri one-and-done Michael Porter Jr., joined by two-time All-Star Isaiah Thomas. The Nuggets looked promising at the end of last season, and with their successful offseason, they’re going to be a team to watch.

Portland Trail Blazers – The Trail Blazers round out our top eight teams in the West as they look to make the playoffs for the sixth straight year. All-NBA first team guard Damian Lillard and elite scorer CJ McCollum hope to lead Portland to success as one of the best backcourt duos in the league. The Trail Blazers were the third seed in last year’s playoffs, but while other teams have bolstered their rosters, the Trail Blazers haven’t made any significant changes.

The Warriors are bound to make it back to the Finals; by April, their lineup might be known as the most dominant starting five of all time. Imagine having to go against a starting five consisting of a Defensive Player of the Year, a two time MVP, a four time scoring champion and former MVP, a four time All-Star and finally, the best shooter in the league who once dropped 60 points in only 36 minutes. No team will want to face the Warriors in the playoffs and no team will stand a chance.

The Celtics look to challenge the NBA’s most powerful team with their own superteam. Kyrie Irving and Gordon Hayward are the stars leading the Boston team with blossoming young stars in Jayson Tatum and Jaylen Brown. Along with superb players in Al Horford, Terry Rozier and Marcus Smart, Boston should meet Golden State in the Finals.

This Finals match up is going to be one to cherish. Both teams are stacked with talent and are hungry for a championship. The Celtics are the top defensive team in the league, and are poised to put up a good fight against the Warriors, but nothing will stop Golden State from winning its third straight championship. Kevin Durant will repeat as Finals MVP as the Warriors’ deadly lineup dominates Boston in perimeter scoring and post defense. New year, same result. The Warriors will be the 2019 NBA Champs.