The Black and White • October 9, 2018 • https://theblackandwhite.net/61184/sports/athletes-react-after-first-games-on-new-turf/ 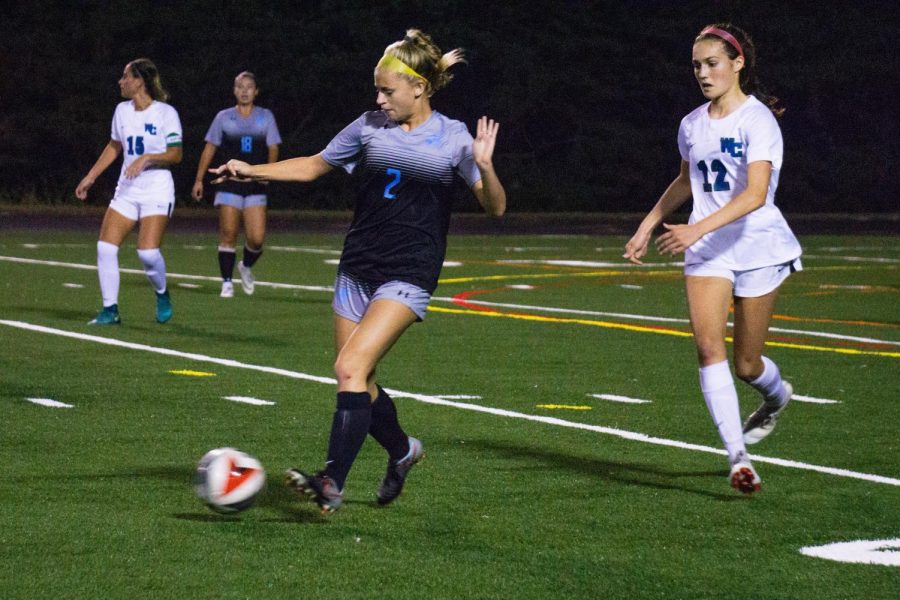 Midfielder Kasey Donaldson plays a pass in girls soccer's Monday night game against Churchill. Girls soccer was one of the first teams to have a home game on the newly finished turf field. Photo by Lukas Gates.

After a two-month delay, the turf field is finally complete, and fall sports teams have played their first home games of the season. Football, field hockey and boys and girls soccer have all either practiced or played on the field.

Players are excited to be playing at home again. The new field has received mixed reactions.

Some football players found themselves a bit scraped up when they were tackled, but for the most part they were satisfied with the new field.

“We thought we’d get cut up a little bit more, but it ended up being really good,” lineman Tom Wilmarth said. “Everyone found their traction pretty fast.”

Other teams were less happy.

The girls soccer team had to adapt their play to the new surface, midfielder Meagan Olsen said. Players had to adjust the way they kick in order to avoid slipping.

“Being on this turf, you have to play differently than you usually do,” Olsen said. “Goalies have to take kicks differently because they’re too worried about falling. That should not be a worry when you’re playing soccer.”

The field hockey team also complained about the turf’s traction. The team has played on the baseball field for years, but this year they will play on the turf, and players are frustrated with the new surface.

“I thought the turf was very slippery, maybe it still needs to be broken in,” midfielder Gabby Kisslinger said. “I fell a lot. I have a lot of scrapes and bruises on my knees and overall I just wasn’t a fan.”

Despite the issues, athletes are excited about finally playing at home after two months of waiting for the field and constantly playing on the road.

“We’re excited to have the field,” Olsen said. “It felt great to play at home, and we were so happy about the crowd that came out.”