The Black and White • October 5, 2018 • https://theblackandwhite.net/61117/sports/girls-volleyball-falls-short-of-comeback-loses-3-1-in-dig-pink-game/ 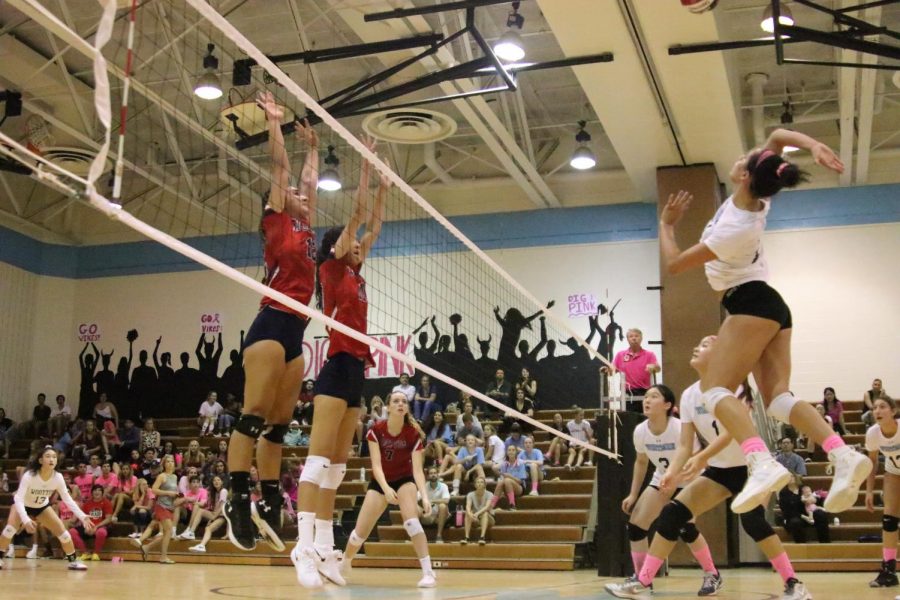 Outside hitter Bella Pardo jumps to spike the ball against the Wootton Patriots. This game was the team's annual Dig Pink fundraiser to raise money for the fight against breast cancer. Photo by Defne Aslan

The girls volleyball team (5–3) suffered a 3–1 loss to the Wootton Patriots (6–3) Thursday in their annual Dig Pink game, which is a fundraiser to raise money and awareness for Stage Four Breast Cancer.

The Vikes struggled early on in the match, going down 18-11 in the first set. The team was unable to communicate consistently and effectively which led to frustration on the court.

“The team definitely tends to get sort of down when we make errors or lose a few points,” junior Xandra Chen said. “If we are able to get our team in the right mindset and attitude, we can beat a lot of the better teams we play.”

After losing the first set, the Vikes nearly staged a comeback in the second, tying the game at 24–24, though it wasn’t enough to hold off the Patriots. The Vikes mounted a comeback after winning the third but were unable to complete it as the Patriots took the fourth set to win the game.

The team’s next game is at home against the Gaithersburg Trojans (4–5) Thursday at 4:45pm.