Board games: boring no longer 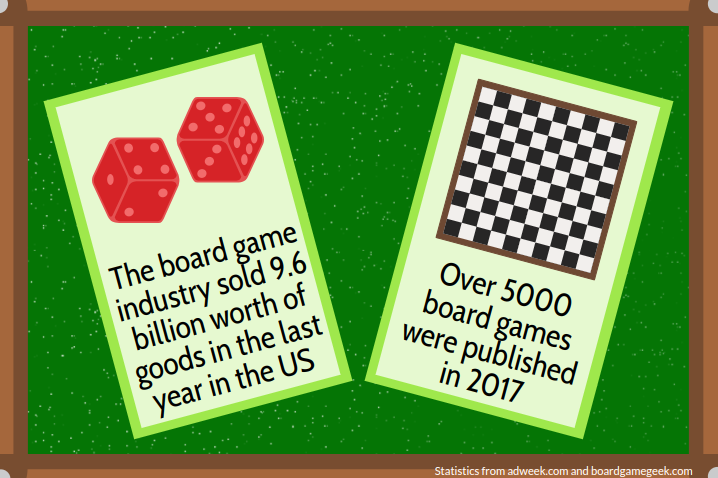 It was midnight on a Friday, and four teenagers sat in a basement. Dice and accusations were flying as the group desperately tried to hunt down a traitor in their midst. Finally, by 1 a.m. they thought they had found him. By 2 a.m., they realized there was never a traitor to begin with—they’d caught an innocent friend.

Of course, this was no crisis, just a heated game of Dead of Winter. Over the last decade, board games have entered a renaissance. Growing up, many of the popular board games were frankly boring and unimaginative. While some (like Risk) require a bit of thinking, games like Sorry, Monopoly, and Life are won by luck rather than skill.

Because of this, board games have gotten a bad rap. They and are generally tucked away in never-opened closets and attics, away from anyone’s idea of a good time. Changes, however, in board game design over the last 15 years have made board games much more exciting than their often monotonous predecessors.

Over 5,000 board games were published last year alone, part of a surge that has grown the industry to the tune of $9.6 billion in 2016 worldwide sales, including a 28 percent increase in U.S. sales in the same year. Gen Con, the largest boardgaming convention in the country, welcomed over 200,000 visitors through its doors this August.

Games of every possible genre and type have been published, revised and published again. There’s Twilight Imperium 4th Edition, a game that takes six players, eight hours and a box so big that it can also serve as as a toddler’s bed. On the lighter side there’s King of Tokyo, a push-your-luck dice game where players struggle to be the best monster in the city. If you want theme and a story, Betrayal at the House on the Hill has you covered. Players explore the aforementioned house, only to unleash a randomly-generated terror ripped straight from a cheesy horror flick.

Board games have a unique appeal because there’s just nothing better than sitting around a table with friends and playing. It provides a connection that’s lost in this increasingly digital world. My friends and I have a rule: phones to the side, focus on the game. The stories that come out of that table—the upsets, the failures, the cursed dice—have brought me closer to my friends more than playing online or texting ever could.

Board games also challenge the mind. Reading the board and other players, along with crafting your own moves, is an incredibly transferable skill. Board games make you practice thinking on your feet and build strategic thinking and decision making—skills that can be applied across a range of situations, from math class to interviews to time management.

So upgrade your cardboard collection, gather a few friends and play a reinvented, or brand new board game. You’ll thank me later.