The Black and White • September 17, 2018 • https://theblackandwhite.net/60633/news/turf-field-nears-final-stages-of-construction-remains-unfinished/ 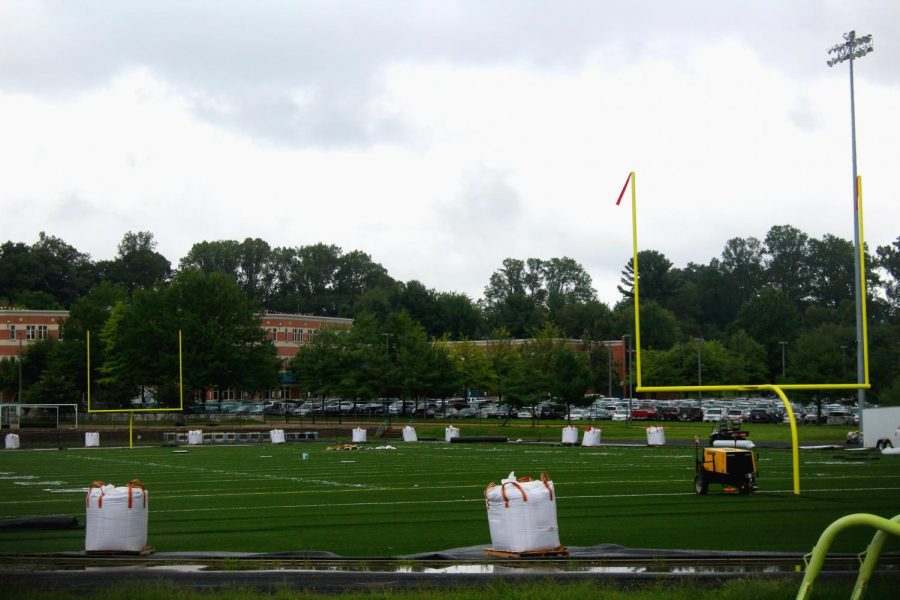 Construction on the turf field pauses for the day due to rain. After four months of work, the field remains unready for use.

The soccer, football and field hockey teams have yet to play a home game this season as they wait for the new turf field, originally scheduled to be completed in time for the fall sports season.

When students returned to school Sept. 4, workers for the company installing the turf were still working on the field, about four months after construction began. Now, the workers are hoping for dry conditions so they can continue to glue turf panels onto the field.

Weather has been the challenge this summer, with nearly 10 inches of rain falling in what was the fourth-wettest July on record for D.C. The total rainfall in July and August was 14.56 inches, which was the 10th-wettest two-month stretch in D.C. history, according The Washington Post.

The field is in its final stages of completion, though when it will be ready for play is unknown, and entirely dependent on weather conditions, athletic director Andy Wetzel said.

Meanwhile, the unfinished field continues to complicate logistics for fall sports teams. Both the boys and girls varsity soccer teams have had to move half of their practices to Burning Tree Elementary School, because only one of the two teams is able to practice on the baseball field each day. The field hockey team practices at their regular time after the soccer team’s practice is over.

All sports teams that use the field have had to play every game away, adding hours of driving for athletes and parents. Varsity and JV boys soccer both had their games cancelled this past Saturday due to poor field conditions at Churchill after a week of rain; the games were originally scheduled to be played on Whitman’s turf, where rain wouldn’t have been an issue.

“When we have to go to Burning Tree, it slows down practices, and the field there is really bad,” girls soccer player Halle Cho said.

Fall sport athletes have also noticed the negative effects away games have had on school spirit.

“It’s affected the way we mentally prepare for games,” football player Jereme Corbin said. “When we won against Einstein, we didn’t get to celebrate, we got on a bus and drove home for 35 minutes. It takes away the spirit, it’s hard.”

The Black & White Online will continue to provide updates on the field’s progress.