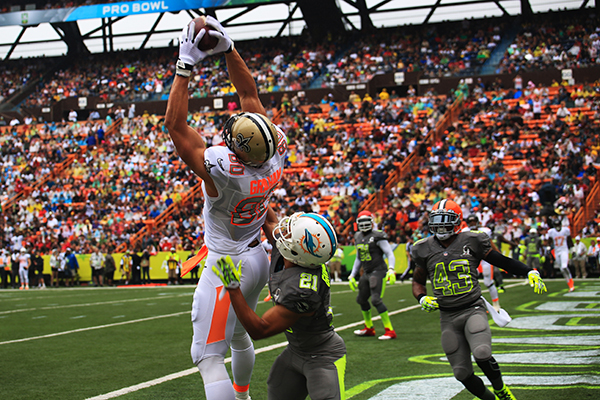 Today marks the second Sunday of this year's NFL action. After week one's results, our sportswriters have made their predictions for the rest of the season.

By Bennett Solomon and Mateo Gutierrez

Football is back baby. The 2018 NFL regular season began Thursday, September 6th as the defending Super Bowl Champions Philadelphia Eagles, hosted the Atlanta Falcons and won in exciting fashion, 18–12. As the first of many football Sunday’s is in the books, here’s what to expect this season.

Read until the end to see our NFL Playoff Predictions

The Eagles bring back most of their Super Bowl team, though they will be without star quarterback Carson Wentz for the first two games, as he is recovering from a torn ACL. Nick Foles, their backup, has proved he can make a championship run and looked promising against the Falcons. Expect the Eagles to continue their success from last year.

For the runner-up New England Patriots, quarterback Tom Brady returns after a disappointing Super Bowl loss, and looks to lead the Patriots back for another shot at the Lombardi trophy. Brady lost his top wide receiver in Brandon Cooks, but star tight end Rob Gronkowski returns. The Patriots will continue to dominate the AFC.

Previewing the Ravens and Redskins

The Ravens had a shot at the playoffs last year, but suffered a heartbreaking loss to the Bengals in their last game. Joe Flacco is back again for his 10th year with the team and and will benefit from an upgraded receiving corps, including Michael Crabtree and Willie Snead. We don’t see the Ravens sneaking into the playoffs because the Steelers will control the division and the AFC’s strength makes a wildcard spot unlikely.

Despite losing quarterback Kirk Cousins to the Minnesota Vikings, the Redskins look to be in good hands, having acquired quarterback Alex Smith from the Kansas City Chiefs. The Redskins also signed veteran running back and 2012 NFL MVP Adrian Peterson, hoping he can be a major factor in the new-look offense. Peterson has already shown flashes of his old self with 166 all-purpose yards in the Skin’s 20–6 week one win against the Cardinals.

The Redskins enter this season in arguably the toughest division in the NFL, so unfortunately we don’t see Washington in this year’s playoffs.

Rookies to look out for:

Minnesota is home to one of the best defenses in the league with stars all over the field. Add a loaded offense, with a prospering receiver duo, a former first round running back and Kirk Cousins, and you might just get this year’s NFC champions.

Quarterback Drew Brees is entering his 17th season in the NFL, and this year he has the potential to lead the Saints to the Super Bowl. The Saints return their key offensive starters from last year, including running backs Alvin Kamara and Mark Ingram and wide receiver Michael Thomas.

The Rams have one of the best defenses in the league led by defensive end Aaron Donald. Jared Goff and Todd Gurley lead the Rams’s dominant offense and newly signed wide receiver Brandin Cooks will bolster their passing game. Expect the Rams to dominate the NFC West like they did last year.

Despite running back Le’Veon Bell’s absence due to contract difficulties, the Steelers are a dangerous team nonetheless. Antonio Brown, perhaps the best receiver in the league,  leads a young receiving corps featuring rising talents Juju Smith-Schuster and Eli Rogers. A strong defensive line and linebacking corps will propel the Steelers to another AFC North title in a fairly weak division.

The Jaguars surprised the league last year making it to the AFC championship, coming up short to the Patriots. The Jags’ defense, led by cornerback Jalen Ramsey, will be almost impenetrable for opposing teams.

Last year, the Chargers landed just short of the playoffs. Even though the Chiefs are the favorite to win the division, the Chargers have a strong defense and an explosive offense led by quarterback Philip Rivers. Don’t be surprised if they’re a high seed entering the playoffs.

After last year’s disappointment, Tom Brady and the Patriots are bound to return to the Super Bowl to seek vengeance. It would be the 3rd consecutive year playing for a championship for the Patriots. For the Vikings, it would be the first time since 1977. Minnesota is the most balanced team in the NFC; expect Kirk Cousins to lead this Vikings squad to the biggest game of their lives.

As for who will hoist the Lombardi trophy in February, expect experience to be the deciding factor and no one has more experience than the G.O.A.T, Touchdown Tom. Patriots edge out the Vikings in a close contest and Brady gets his 6th ring.