The Black and White • September 11, 2018 • https://theblackandwhite.net/60596/feature/how-to-catch-the-dragons-tail-tips-on-viewing-the-draconid-comet/

How to catch the dragon’s tail: tips on viewing the Draconid Comet 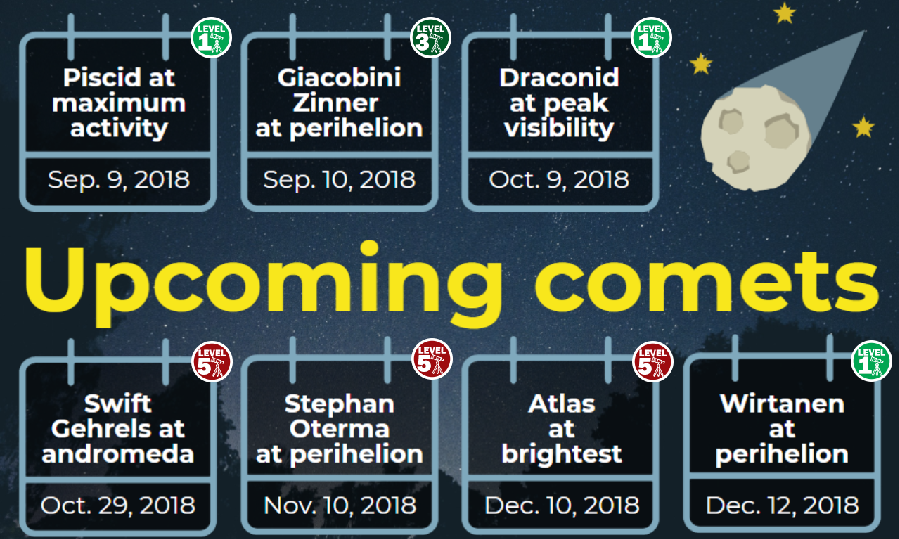 At midnight, a ball of frozen fire will streak across the cloudy sky, signaling the changing of seasons. Comets in our sky aren’t rare, but they’re usually too dim to see. The 21P/Giacobini-Zinner comet — more commonly known as the Draconid Comet or 21P/G-Z — will be a bright exception.

What is a comet?

Described by NASA as “cosmic snowballs of frozen gases, rock and dust,” comets are leftover material from the formation of planets of our solar system. When a comet in orbit approaches the sun, it heats up and forms a long tail of gas and dust. It’s believed these remarkable celestial objects come either from the Kuiper Belt—the region of our solar system that’s beyond the orbit of Neptune—or the distant Oort Cloud. The Oort Cloud contains longer cycle comets, such as Halley’s comet which passes Earth every 81 years.

French astronomer Michel Giacobini first discovered the Draconid Comet in 1900. The comet orbits the Earth every 6.6 years; on Sept. 11, it will be visible once more. Along with its impressive brightness, this comet is also the parent to the Draconid meteor shower, which means we can expect to see a meteor shower Oct. 6.

Why is this comet special?

21P/G-Z has a level 3 of 5 brightness which makes it visible to the naked eye (with level 1 brightness meaning a comet can be easily spotted and level 5 meaning the comet is invisible to the eye). Additionally, the Draconid Comet’s brightness continuously increased in magnitude as it crosses into the Americas, so we’re going to be getting a better view than the rest of the world.

How and where can you view it?

When the clock strikes midnight on Sept. 11, grab some binoculars and the Star Chart app and venture to the Billy Goat trail. If that isn’t possible, any location with a view of the sky will suffice. The closest one is the Victory Island Outlook, a portion of the Billy Goat Trail in Potomac.

21P/G-Z will be taking up residence near the Gemini constellation, which can be found using the Big Dipper. By drawing an imaginary line diagonally through the stars of Megrez and Merak, you’re going the opposite direction from the Big Dipper handle. This line will guide you to the Gemini and the Draconid Comet. If you need more specific information, use this site to find Gemini.

This opportunity only comes once every six years; try to sneak a peek at this spectacular celestial event before it leaves.