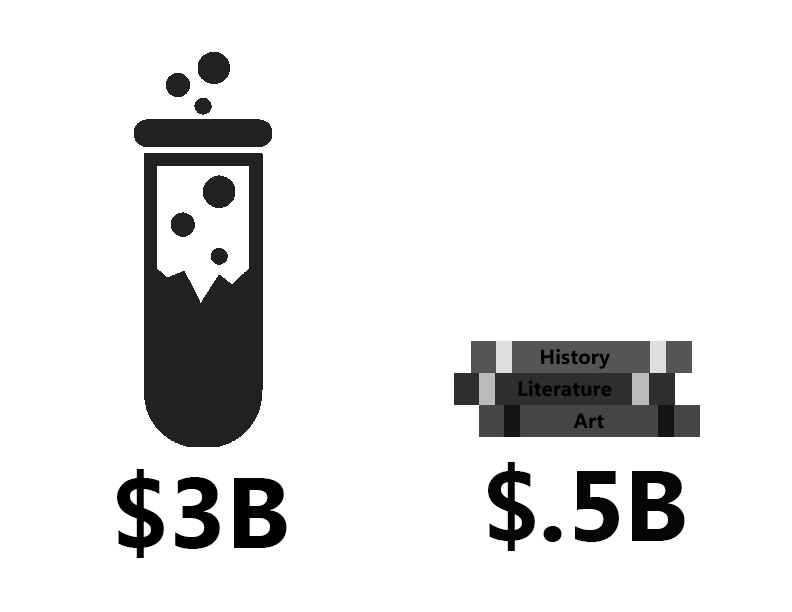 The story is repeated to the point of cliché: an English major one day, a barista at Starbucks the next. It seems as though a degree in the humanities is a waste of time, money, and effort. If fact, with the support of politicians, CEOs and educators, STEM—science, technology, engineering and mathematics—has secured its place at the top of the educational hierarchy, while the humanities have suffered.

STEM fields have received an enormous amount of financial support over the past decade. In 2014, the federal government spent $3 billion on just STEM education, roughly six times more than on all humanities programs combined, according to the American Academy of Arts & Sciences.

Even at Whitman, STEM classes benefit from high enrollment and high popularity. As the science department adds new courses, low student enrollment in humanities courses means that four of them, including Art History and Global Issues, won’t be classes next year. Part of this can be attributed to the fact that a majority of students see STEM subjects as better for college, according to an recent informal Black & White survey of 27 sophomores and juniors.

But we need the humanities. They teach us critical thinking, how to be nuanced, and how to be skeptical—skills that are hard to obtain elsewhere. We should shift our focus away from only STEM and towards a more balanced education. Skills learned from the humanities make us autonomous and anti-conformist, which help us think outside the box. They help us adopt creative, innovative solutions to complex problems.

The humanities also make us better people. Literature allows us to enter the mind of strangers with lives completely unlike our own. We learn empathy and sympathy. These skills can’t be obtained from STEM, since it’s hard to measure or empirically calculate and evaluate the emotions of a stranger. But they’re important—they make us kinder, wiser and more understanding.

Opponents argue that the humanities are worthless, and that those who study the humanities will suffer financially for their choices. This is true to an extent, although the Wall Street Journal found that humanities majors make an average of $66,18 a year, which, though less than STEM majors, is more than the average wage for American college graduates, $50,556 a year. This makes sense: employers value humanistic skills such as creative problem solving and the ability to deal with ambiguity in their new hires, finds Lydia Frank of Payscale. The humanities offer that which employers seek.

But even if that weren’t true, this argument would still be wrong. Just because humanities majors might be less lucrative doesn’t mean we should neglect them. Universities aren’t vocational schools; they’re places to grow and to become good citizens, insightful intellectuals and well-rounded individuals.

Continuing to cast the humanities aside is a bad idea; we need them because they tell us who we are, and they give us skills that can’t be found anywhere else. None of this is to say that we don’t need STEM—education isn’t a zero sum game. But by raising STEM up at the expense of every other subject, we’re depriving our students of important skills.